A MONAGHAN woman, whose first haircut aged four didn't go quite to plan, has just celebrated 60 years of hairdressing.

Margaret Sherlock, 86, grew up in rural Ireland in the 1940s where ambitions to be a hairdresser were pretty rare.

But undeterred, she discovered her love of all things coiffure aged four when she gave herself a scalping with the help of a cut throat razor while her family were busy on the farm.

Thankfully her skills with the scissors have more than improved over the years and she's now marked her sixth decade in the business - with no plans to retire yet.

Living in Lancashire, Margaret runs her own salon in Chorley, where she works five days a week styling clients such as fellow Monaghan native Cath Murphy, nee McQuillan, who has been having her hair styled by Margaret since she was a teenager.

From finger waves to bouffants, curly perms to a variety of blow dry styles over the years, hair fashions have come and go.

But Margaret has always kept up with the times. “Even now I can’t resist picking up a magazine featuring the latest looks or searching online for the latest trends,” she said.

"We have so many lovely clients and we regard them as friends as well as customers," she added. "But hairdressing can be hard work and especially in the early days, we worked very long hours even more so at holiday times.”

Having decided to become a hairdresser from an early age, Margaret scraped enough money together to pay for an apprenticeship in Aughnacloy, Co. Tyrone when she was just 15 years old.

But with hairdressing jobs few and far between at the time, she also qualified as a nurse at Tyrone and Fermanagh Hospital. 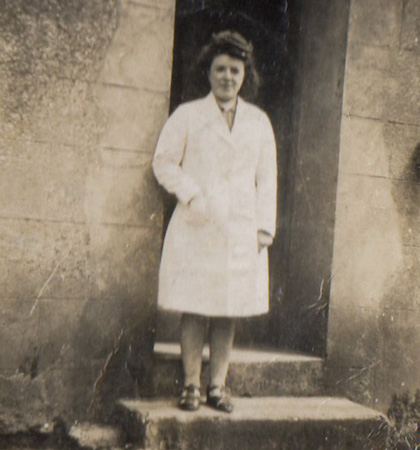 Margaret as a trainee hairdresser in 1945

Having moved to Britain in 1952, it was only when her daughter Linda was born in 1956 that Margaret returned full time to hairdressing, setting up Hair by Margaret.

The business stared off in the front room of her home but soon became a proper salon, with the family living upstairs until 1971.

As the business grew, she was joined by her husband Frank, also from Monaghan, and he was with her every day at the salon until a week before he passed away in 2008.

Margaret’s daughter Linda - who is now the business manager having also pursued a career in education - and her solicitor son Adrian said they are very proud of their mum's milestone achievement.

One thing the family never missed out on over the years was the annual trip to Monaghan to visit relatives and friends.

But it was always a bit of a busman’s holiday for Margaret.

“I used to take my kit over with me and my sisters always seemed to be ready for perms when we went to visit," she joked.

"My scissors were also put to good use as I was asked for many haircuts whenever we went around visiting but we have some great memories of those times.”

Margaret says she loves her job and claims she would be bored if she had to give it up. “I have no intention of retiring any time soon,” she said.