SKELLIG Michael, the UNESCO world heritage site off the coast of Kerry, has suffered a “significant” rock fall which could delay its opening to tourists.

The Office of Public Works said staff discovered the debris last Friday while checking the island’s safety ahead of the visitor season.

The fall occurred when large rocks fell from the upper slopes onto the public pathway below.

Luckily no one was on the island at the time as it will not be opened to visitors until next month.

The island saw visitor numbers surge by well over 1,000 last year, thanks to the publicity surrounding the islands inclusion in 2015’s Star Wars: The Force Awakens.

Interest in the site is likely to grow even more, with Skellig set to feature even more prominently in the franchise’s next instalment – The Last Jedi – which comes out in December. 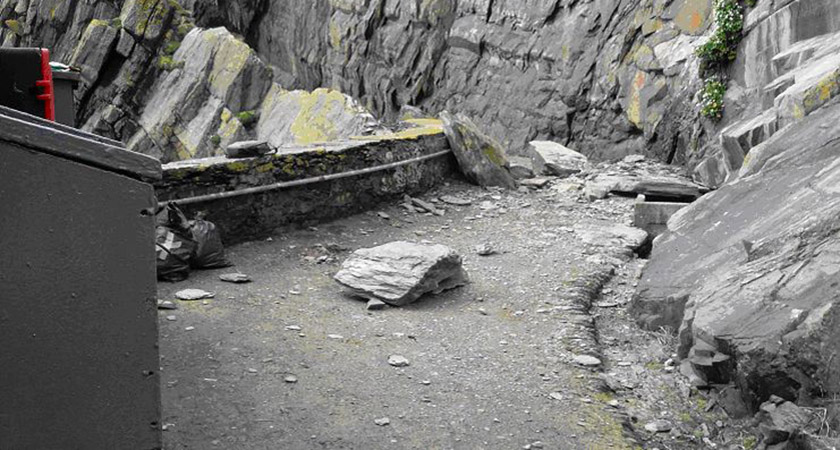 A number of large rocks fell onto a path for visitors. Picture: OPW

However, senior conservation architect for Skellig, Michael Grellan Rourke, said the rockfall was not linked to the island’s increase in visitor numbers.

“It is a natural phenomenon,” he said. “Weather conditions have played a role.

“It’s just unfortunate that we’ve had two in the last two years, which comprises 50 per cent of all rock falls in 40 years. It is nothing to do with filming.

Mr Rourke added that had anyone been in the area, there would have been a “significant threat” to their lives.

“Some of the material is very large and would definitely have caused severe damage to the structures had they been hit directly,” he said.

“It’s quite clear that, had these rocks come down directly on top of the huts, there would have been a significant threat to anyone inside.”

A team of inspectors will make a decision on when to open the island to visitors after repairs are carried out next week.