A NEW book by the war historian and author John Taylor details how a group of captured Irish soldiers during World War I forewarned the Germans to the first mass tank attack in history in 1917.

Mr Taylor and his research team came across the discovery during an eight-year-long research project which culminated in the recent publication of Deborah and the War of the Tanks.

Evidence scoured by the team from German interrogation reports seems to suggest that captured members of the 36th Ulster Division divulged details about the British tank attack on the eve of the assault.

The battle had until then been prepared in complete secrecy. It represented an entirely new form of battle, in which tanks would break down barbed wire and penetrate entrenched enemy lines – and marked a last-ditch attempt to show that the tank could be an effective weapon.

Just before the battle, six soldiers from the 36th Division were captured following a night raid conducted by German forces on November 18, 1917 near Flesquières in northern France.

Historians have for some time struggled to explain why Flesquières proved the only stumbling block in a generally successful campaign for the British, with the Germans having rushed reinforcements to the village on the eve of the battle.

It seemed almost as if the German forces had been forewarned. Now, a century after the battle, it has finally come to light that the captured members of the 36th Division had indeed revealed details of the planned Flesquières assault to German high command.

Most remarkably, it appears that at least one of the captured men shared details of the assault with the enemy due to his Irish Republican grievances. 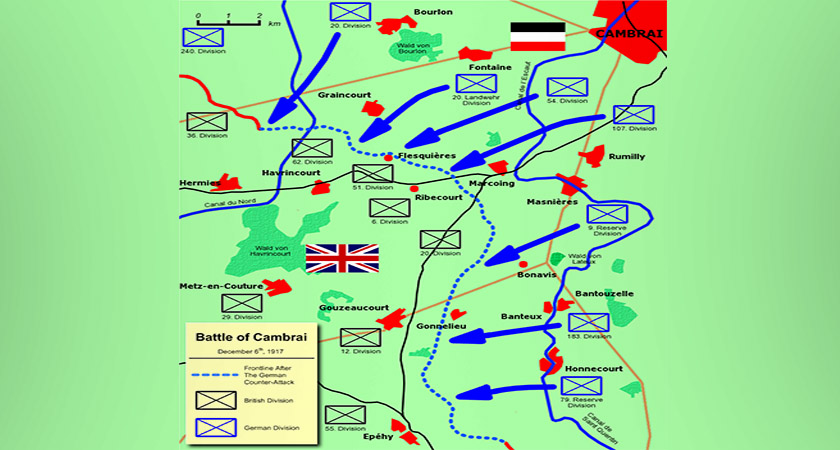 Outline of the Cambrai Offensive [Source: Wikipedia Commons]
Speaking to The Irish Post, the book’s author Mr Taylor said: “The thing that I found truly staggering – and a major revelation – was this fact that some of these members of the 36th Division were very discontented about British actions in Ireland.

“In the wake of the Easter Rising there was a lot of bitterness over British behaviour back home, as we can perhaps understand why.

“It’s all the more surprising that this came from the 36th Division, because everyone thinks of them as being intensely loyalist.”

Though the 36th Ulster Division had indeed amassed a reputation for the Ulster Loyalism in its ranks, like many units they lost much of their local identity when killed or maimed troops were replenished by numbers from elsewhere.

One of those outsiders was Private Laurence O’Brien, a southern Irishman born near to the Wicklow-Carlow border and one of only two Catholics captured on that day – the other being a Derry man.

O’Brien survived the war but died less than a decade later in Dublin in 1924, at the age of 33, from catarrhal jaundice while toiling at the workhouse.

Interestingly, O’Brien had enlisted in the Irish Army shortly before his death in 1922 and – perhaps more significantly – had refused the medals owed to him by the British Army for his service in World War One.

If anyone was likely to have divulged information to the Germans, O’Brien certainly fitted the bill.

The interrogation report does not say who said what or even name names, but does outline the motives of the Irish who shared details of the British assault in the plainest possible terms. 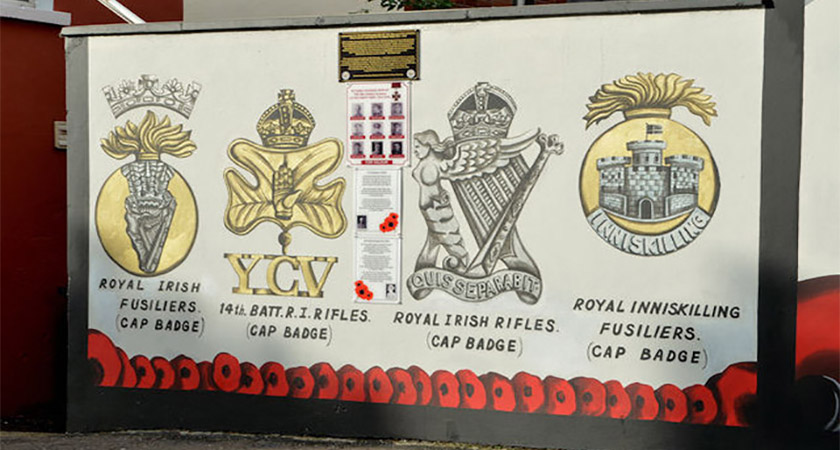 Mural to the 36th Ulster Division, Willowfield, Belfast [Via: Geography.ie]
"The political situation in Ireland seems to have strongly affected the morale of the Irishmen.

A great animosity prevails towards England, with no interest whatsoever in her war aims. They say if an uprising takes place in Ireland, they would take up arms against England."

The Irishmen’s divulgence of classified information would prove greatly significant to the outcome of the assault in the long-run.

“The Germans really responded to this," explains Mr Taylor. “Those troops (who were forewarned) made all the difference in Flesquières.

“It allowed the Germans to cling on and was the fundamental stumbling block in the British advance. Flesquières was the only place that wasn’t taken. Because of that, cavalry couldn’t go through and the bridge that was vital to take wasn’t taken.

“What happened was certainly militarily significant.”

During his investigations, Taylor found that the incident – or at least the sentiment involved – was not an isolated event.

“I also came across another interrogation report on a group of Irish deserters. They asked their German captors to send a message back to their own troops.”

The message in question, sent by an Irish soldier, was equally clear in tone: “If I could only get back to tell you what life we have here. It’s better than Blighty. Take my advice and come over, and do not be fighting for England any longer.”

Despite the leak of war secrets, the Battle of Cambrai would eventually result in a partial success for the British, one which gave hope that the war could be ended before American troops were mobilised.

As for the men of the 36th Division, no action was taken against any of them for the information they gave to the enemy, and they were all awarded medals after the war’s close.

“However angry some of the men were about the situation in Ireland, the fact that it came out in this way is surprising really, in that they were willing to do this," Mr Taylor added.

The research team had previously attempted to locate living relatives of the Irishmen, but with limited success.