AHEAD of the Irish Tricolour’s 170th anniversary this week, the flag has been proudly flown at the IAAF World Indoor Championships at the weekend.

Granted, we didn’t win anything, but the flag was still fluttering at the biennial event in Birmingham.

Ivorian sprinter Murielle Ahouré stormed to victory in the final of the 60m on Friday, securing her country’s first-ever gold medal at the championships.

That might explain why the camp was a little unprepared – they forgot to have an Ivory Coast flag on hand for their athletes in the event of a podium finish.

However the resourceful Ahouré sourced a Tricolour from an Irish fan in the crowd, David Kenneally, and simply flipped it around to celebrate with compatriot Marie-Josee Ta Lou, who finished second.

Signing off from Birmingham: here's the reunion between the Irishman and the Ivorian, David Kenneally and @MurielleAhoure, the day after she carted his Irish flag on the lap of honour after victory in the 60m. Photo: @walkerkate pic.twitter.com/iAmdjKsxsH

Irish athletes Ciara Neville and Amy Foster had earlier been eliminated in the 60m heats, but at least the Irish flag got to do a lap of honour.

Can we count it as an Irish victory? 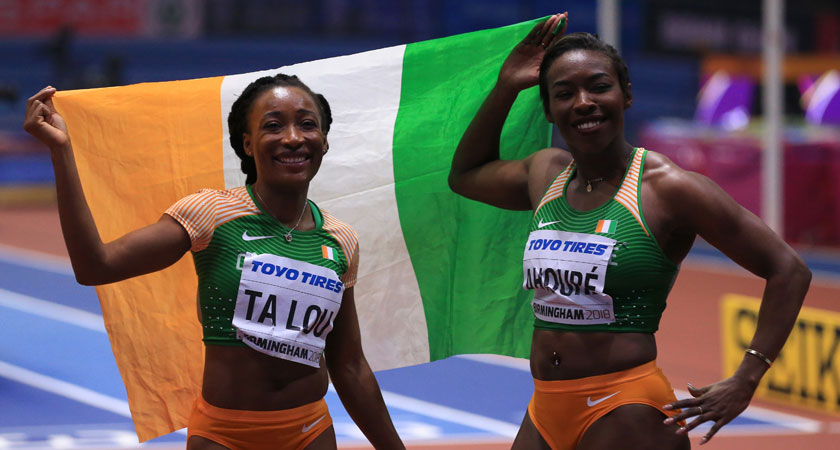 No medals for the Irish at #iaafworlds, but our flag got to do a lap of honour. Murielle Ahoure, winner of the women's 60m was helped out by Irish fans after being unable to find an Ivory Coast one. pic.twitter.com/dOg7zNp2IS

Murielle Ahoure was celebrating gold but there was no Ivory Coast flag. 🇨🇮

What did she do?

Grabbed a Republic of Ireland one instead! 🇮🇪

Been following Murielle and Ta Lou for a while. Not sure they know they're adopted Irish 🇮🇪💚🇨🇮

Can we give her the freedom of Dublin 😂