AN IRISHMAN has discovered jewellery which may be worth thousands of pounds while completing restoration work on a piece of antique furniture.

Simon Gilboy of Gilboy’s – an antique repair and restoration company in Devon – told The Irish Post about the “very valuable” discovery, which was hidden in a 19th century bureau.

Mr Gilboy – whose father is from Cootehall, Boyle, Co. Roscommon – had undertaken restoration work on a range of antiques belonging to Shallowford Farm, a charity that helps disadvantaged families in Devon.

Among the items being restored were a 30-year-old caravan and a cylinder bureau, which was covered in mould and in a “poor condition.”

Mr Gilboy said that the bureau was taken to the company’s workshop in Staverton where restoration began. 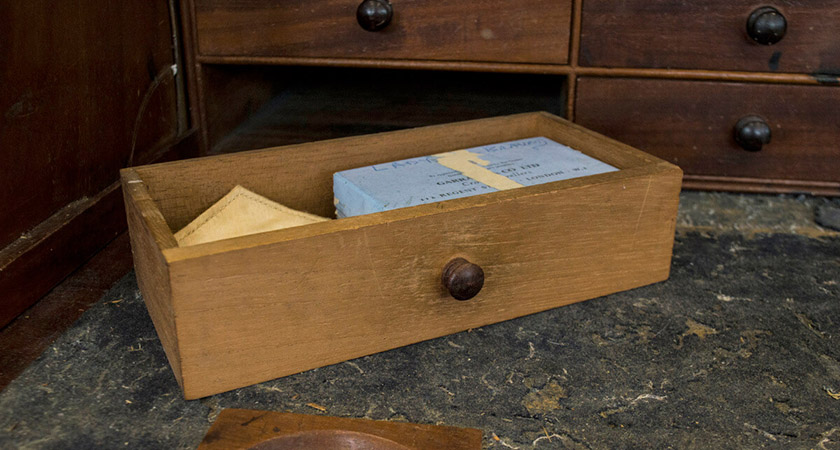 The drawer in which the jewellery was found

A few old coins were found trapped in the chest, while one of the drawers contained a silver chain and a neatly written letter from a young Elizabeth Braund – the founder of Shallowford Farm.

“We soon began to realise the brooch contained in this box was more than likely to be of some considerable value,” Mr Gilboy said.

“I counted 75 diamonds and 34 emeralds… I then knew we had to contact the Trust as I was sure the discovered which had been hidden for many years would be of great value to the Shallowford Farm Foundation.

“It is not unusual for us as restorers to find personal effects that have been trapped in the body of a bureau or chest of drawers but this was clearly apparent to all of us that it was potentially a very valuable, special secret that may help to fund the charitable trust that Elizabeth Braund had dedicated so much of her life to.”

Man blames octopus in road for car crash, is arrested for drug driving