during the Barclays Premier League match between Aston Villa and West Bromwich Albion at Villa Park on September 19, 2015 in Birmingham, United Kingdom.

IT HAS not been unusual in recent years for Aston Villa's better players to be attracted by the idea of a big club in Manchester. Hence why Fabien Delph, James Milner and Gareth Barry ended up at City and Ashley Young at United. Jack Grealish, meanwhile, hasn’t got any further than Panacea.

Not so long ago Grealish was seen as the panacea to all Irish football's ills. All it would take – we were promised – was the addition of the Birmingham-born winger to our squad and with a wave of his magic wand, or left foot, we'd be transformed. Instead, Grealish opted for England, the land of his birth and the country his great-grandfather played for.

Should we have been surprised? Not when you remember how he took a year 'to concentrate on his club career', how he turned down a couple of invitations to hook up with Martin O'Neill's squad and how he met Roy Hodgson, the England manager, for tea. And yet no sooner had he decided to leave than the outcry commenced, led, inevitably by Eamon Dunphy.

"O'Neill messed up," Dunphy said. And too many of us nodded in agreement.

Two months later, after a week that started with Grealish being substituted in the second-half of Villa's 4-0 defeat at Everton, continued with him pictured partying in Panacea, the nightclub in Manchester's trendy Deansgate district, before he was banished to Aston Villa's Under 21 side.

Heads are being scratched rather than turned. Was this what all the fuss was about? This Jack the Lad? This 20-year-old who has produced one great goal and one great performance from 20 starts for his club and yet who has been talked up as the next George Best?

To date, he's certainly looked like Best... but only on the nights out. Already this year, Grealish has made the front page of The Sun after a picture of him appearing to inhale nitrous oxide (laughing gas to you and me) found its way to their news desk.

"He's a young man who should learn from this mistake," said Tim Sherwood, Villa's then manager. Sadly, he didn't. Two months later came another picture and another headline, this one taken in Tenerife, where Grealish was holidaying, lying outstretched on the pavement after another night on the tear.

Again Villa intervened, this time with a fine. So, when he was caught on camera again last weekend, Remi Garde, who has replaced Sherwood as manager, decided that three strikes meant he was out of the first-team squad.

Binned to the Under 21s, Garde's message is clear. "For me he is an unfinished player," Garde said of Grealish. "If you don't work and you are gifted it is not enough. But when you work hard you will be rewarded for that." 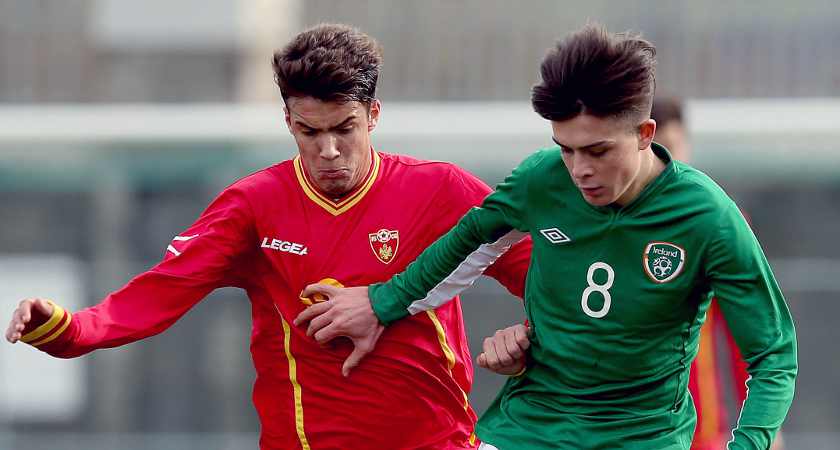 Grealish, who has since declared for England, in action for Ireland's Under 21s [Picture: Inpho]
Yet the problem with Grealish and modern footballers is that big rewards come whether they work hard or not. As a teenager, Grealish signed a new contract worth £20,000-a-week, the kind of money that can do crazy things to a young man's head.

"I remember the day my career changed," said Stephen Bradley, the Jack Grealish of his day who is now assistant manager at Shamrock Rovers at the age of 31.

"It was when I turned 17 and my contract kicked in. I went to the bank-link to take out a tenner and saw my bank balance. Until then it was always either empty or as near as. But this time? This time there were all these zeroes on the end of a number and it changed me. From that day on, my hunger for the game went."

No one is saying the same will happen to Grealish. But it possibly could. He could be remembered as the greatest loss Ireland has had to England since Channel 4 beat RTE to the rights to Father Ted, or he could be just another of those names who quickly fades away.

"The truth be told, he has only shown rare flashes of his blossoming ability on the big stage," wrote David Michael, an Aston Villa fan and blogger in the Daily Mail last week. "In short, he’s done very little so far to warrant such hype when you consider what the likes of Wayne Rooney, Cristiano Ronaldo or Michael Owen, were doing while still teenagers. The media is fast trying to make Jack Grealish a celebrity, before he’s actually proven himself as a football player."

As observations go, this one was on the money. We've all been guilty of building this kid up into something we want him to be. The media latched onto the England versus Ireland saga and elevated Grealish onto a level he barely merited and the fans got sucked into the whole idea that he was a footballing saviour.

"Why should anybody care about a football player most people had never seen play?" Michael asked. "And, anyway, surely he was always going to choose England? Both Grealish’s parents are English, he was born in England and you’d think he’d want to follow in the footsteps of his great-great grandfather who played for England, as well winning the FA Cup for Aston Villa in 1905. That’s before you consider the commercial advantages of playing for England."

Back in Dublin, another night-out after another game resulted in another video of footballers enjoying themselves going viral. Only this time the reaction was different. Robbie Keane, Robbie Brady and Shane Long were lauded for leading a sing-song in the wee hours after Ireland had qualified for the Euros.

What was the difference? In short, it was because Ireland had won that night whereas Villa lost heavily at Everton last Saturday week. Plus, Keane, Long and Brady became famous for what they had achieved on the pitch – all three scored vital goals on the road to qualification – whereas Grealish is possibly better known for his big nights out than his big performances.

"He is a young man, but no matter how young he is, he is now in a responsible position," said Sherwood. "There is only one form of discipline, self-discipline. He has assured me it won't happen again."

That was seven months, one manager and two controversies ago. The penny should have dropped then. Instead the player has been dropped now.

And so, two months after being forced to choose between Ireland and England, Jack Grealish is at another crossroads, one path leading to redemption and a brilliant career, the other to ruin.

He needs to make the right choice this time if Irish fans are to continually believe he made the wrong one the last time.