JOE BIDEN has compared meeting the Queen to being reunited with his mother.

The US President visited the British Monarch for afternoon tea at Windsor Castle this past Sunday, June 13.

He arrived at the Royal family’s Berkshire residence in Marine One just before 5pm.

They were treated to a Guard of Honour courtesy of the Queen’s Company First Battalion Grenadier Guards who also gave a Royal Salute while the US national anthem was played.

In a moment of some significance, Biden then proceeded to accompany the Officer Commanding the Guard of Honour, Maj James Taylor, and Maj Gen Christopher Ghika in inspecting the Honour Guard.

The Duke of Edinburgh, who passed away aged 99 last April, had traditionally escorted visiting heads of state in this ceremonial inspect.

Once the inspection was completed, Biden returned to the dais to watch the military march in the company of the queen.

The pair later walked alongside each other with the UK monarch heard to ask:“You completed your talks?” To which Biden replied: “Yes we did.”

However, the engagement clearly left a big impression on Biden, who later told reporters that the Queen “reminded me of my mother.”

He said: “I don’t think she’d be insulted but she reminded me of my mother, the look of her and just the generosity.” 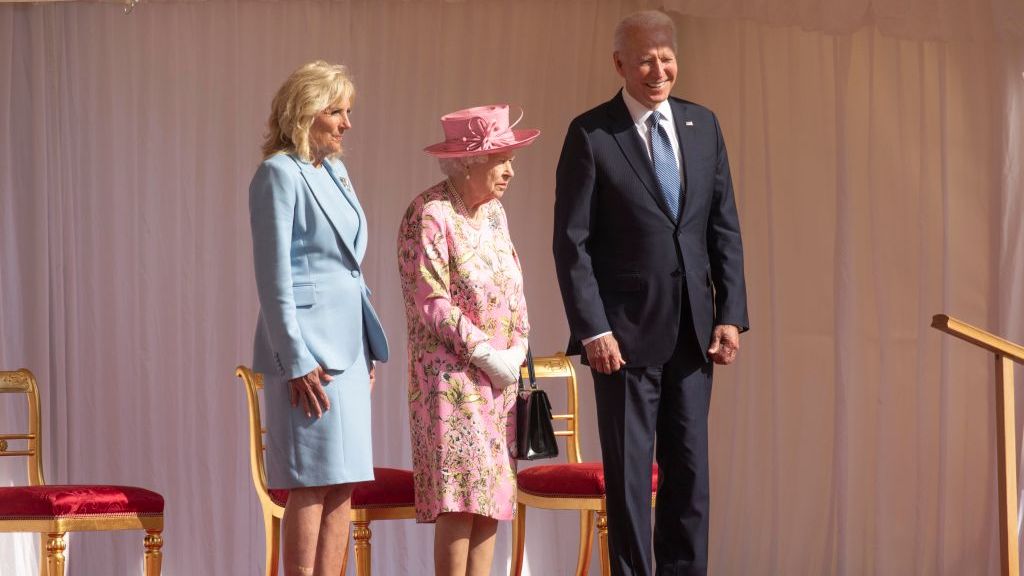 Biden also revealed that the Queen quizzed him on his views of Chinese President Xi Jinping and Russian President Vladimir Putin.

The Bidens had made no secret of their desire to meet the Monarch.

Upon arrival in the UK Dr Jill Biden told reporters: “Joe and I are both looking forward to meeting the Queen. That’s an exciting part of the visit for us.”

The presidential couple initially met the Queen at an event marking their arrival at the G7 Summit. This was then followed up with the afternoon tea at Windsor Castle a day later.