TWO POSTCARDS sent by President John F. Kennedy during a visit to Ireland in 1955 are going up for auction.

The two handwritten postcards were sent by Kennedy to his secretary, Grace Burke, during a brief visit to the Emerald Isle prior to him becoming President.

A fascinating window into JFK’s personality and distinctive sense of humour, in one of the notes, Kennedy writes: "Have stopped here for a few hours. It is a great place—Ireland—but in January—It is as cold as an Irish landlord's heart.”

In the other, Kennedy says: "Met a lot of your cousins. They are all Protestants." 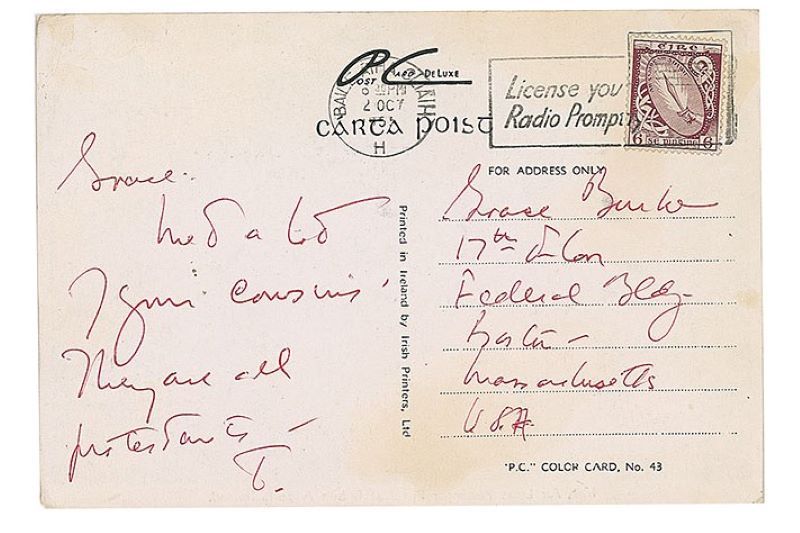 Textbooks from Kennedy’s time as a pupil Choate boarding school are also going up for sale along with handwritten election campaign manuscripts, a back brace, several ties and a vintage cigar box.

The items are being sold as part of a massive collection of Kennedy memorabilia being sold by RR Auction across 72 lots.

Dubbed the Paloger Collection, the assorted lots of memorabilia and photography are the property of 70-year-old private collector Ronnie Paloger, who is hoping the entire collection will be sold as a single unit to be donated to a museum.

“The Paloger Collection will be the first major JFK collection to be offered intact, which was Ronnie Paloger’s intention when he started assembling this collection as a ‘tribute’ to the life and times of JFK," the auction house says. 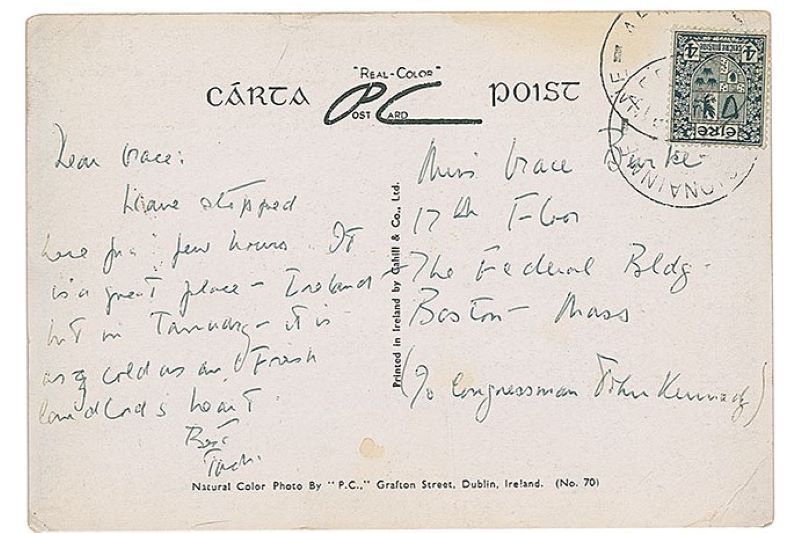 An avid JFK collector, Paloger has slapped a $1.5 million price tag on the collection.

Should it fail to reach that amount, however, then the lots will be broken down and auctioned off individually.

The collection is being housed at RR Auction’s office in New Hampshire in the US and is available for viewing by appointment, from January 17 – 23 or via the online catalogue.

“This collection as a whole tells his life story,” RR Auction Vice President Robert Livingston explained to The Associated Press.

“It’s like a curated museum exhibit in one auction. The whole is greater than the sum of the parts."