John F. Kennedy is on Twitter and it looks like he's no fan of Donald Trump either

JOHN F. Kennedy has arrived on Twitter and, from the looks of things, he's no fan of President Donald Trump.

Irish Central first reported that the JFK Library Foundation was establishing a project called "Words Count" showcasing some of Kennedy's most iconic quotes on the social media platform.

President at a time long before computers, the internet and social media, those behind the scenes at the JFK Library Foundation hopes his sage words would resonate with young people today.

"There are many things that President Kennedy said on a variety of issues that affected domestic and international concerns that are as relevant in today's world as they were in the early '60s," Steven Rothstein, executive director at the John F. Kennedy Library Foundation, explained at the time.

America's first Irish Catholic president, JFK's time in office may have been cut tragically short but he left behind a legacy few others in the White House before or after could match. 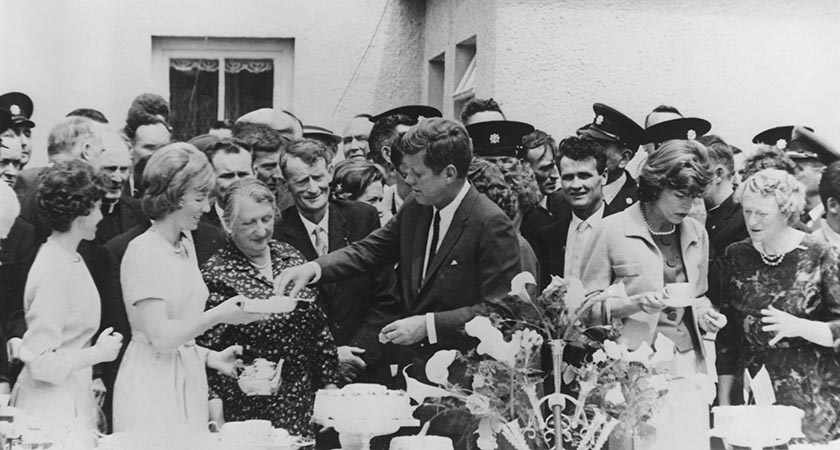 US President John F. Kennedy attends a tea party in his ancestral town of Dunganstown, County Wexford. On the far right is his third cousin Mary Kennedy Ryan. (Photo by Keystone/Hulton Archive/Getty Images)

"Our problem won't be not enough - it's that there are so many inspirational things the president said. It's choosing which inspirational element to use," Rothstein noted.

The project has not been without some controversy though.

That's mainly down to some of the Kennedy quotes selected which appear, on the surface at least, appear to be aimed the words and policies of Trump.

One telling Kennedy quote offered up on the topic of immigration, for example, reads:

"Everywhere immigrants have enriched and strengthened the fabric of American life"-and on poverty-"If a free society cannot help the many who are poor, it cannot save the few who are rich."

“Everywhere immigrants have enriched and strengthened the fabric of American life.” #ThursdayThoughts

While JFK also had this so say about the free press:

"And so it is to the printing press - to the recorder of man's deeds, the keeper of his conscience, the courier of his news - that we look for strength and assistance, confident that with your help man will be what he was born to be: free and independent."

"And so it is to the printing press--to the recorder of man's deeds, the keeper of his conscience, the courier of his news--that we look for strength and assistance, confident that with your help man will be what he was born to be: free and independent."

Is it intentional? Rothstein is rather coy on the subject.

"We're really letting people draw their own conclusion of what they think," he said. "We want them to be inspired by the big ideas that John Kennedy said."