THE lorry that was found in Essex containing 39 dead bodies on Wednesday morning is owned by an Irish woman according to the Bulgarian Foreign Ministry.

The grizzly discovery occurred around 1.30am this morning and a 25-year Northern Irish man, who is believed to have been the driver, has been arrested on suspicion of murder and remains in police custody.

Where the lorry has come from and who the victims inside it are remains unconfirmed but it was initially speculated that the truck had arrived in the UK from Bulgaria. 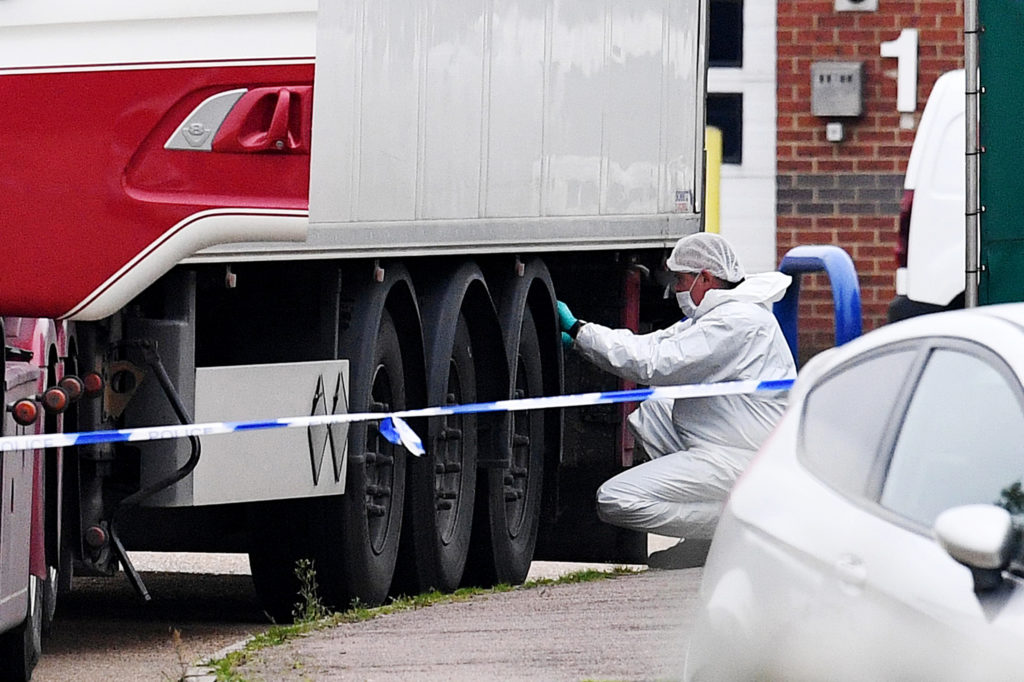 Police investigate a lorry in which 39 bodies were discovered in the trailer, as they prepare move the vehicle from the site on October 23, 2019 in Thurrock, England.

However, further investigation has since discovered that the lorry, while initially being registered in Bulgaria, hasn't been back to the country since 2017, and actually entered the UK via Belgium.

The Bulgarian Foreign Ministry have also claimed that the vehicle is in fact "owned by an Irish woman".

"My thoughts and prayers are with the victims' families and friends. Hope the case is resolved quickly. Strongly condemn the human trafficking and smuggling!"

Meanwhile, Northern Irish authorities are assisting Essex police in the investigation after the Police Service in Northern Ireland confirmed the news on Twitter.

The PSNI is supporting Essex Police in its investigation into the murder of 39 people.

Separately, a spokesperson for Police in the Republic of Ireland said it was "monitoring the developing investigation in the UK and will provide every assistance possible."

The 39 bodies, one of which is the body of a teenager, were found in a refrigerated truck, but the cause of death for the victims still isn't clear.

Essex Police have urged for patience as they deal with the situation in most respectful way possible.

"This matter has attracted national and international interest and it is absolutely imperative that the operation is conducted with the utmost respect for the 39 people who have lost their lives," said Deputy Chief Constable Pippa Mills.

"The lorry and trailer will be moved to a secure location at Tilbury Docks so the bodies can be recovered whilst preserving the dignity of the victims."