MATT DAMON has paid tribute to Ireland’s “awesome” frontline healthcare workers and praised Taoiseach Leo Varadkar as a “badass” for working shifts at a hospital during the coronavirus pandemic.

The Talented Mr. Ripley star has been residing at a luxury property with his family in the seaside village of Dalkey in Co Dublin ever since lockdown began.

Speaking during an exclusive interview with Graham and Nathan from SPIN 1038's Fully Charged radio show the 49-year-old told the pair living in Dalkey is “like a fairytale”.

He was also full of praise for Taoiseach Leo Varadkar and his decision to return to medicine and help Ireland’s frontline healthcare workers.

“You’ve got a president who just goes to the hospital and starts working, I mean what a badass, it’s just on another level,” he said.

As part of the interview, Damon also spoke to a fan and healthcare worker who called into the show, thanking them for their sacrifice during the pandemic.

“Thank you so much for what you’re doing,"” he said.

"I can’t even tell you; this has been so horrible for everybody but if there’s any silver lining it’s that hopefully people are finally understanding how awesome you Frontline workers are and what you guys do and this debt we owe you guys.

"I feel like that is the one thing to come out of this, we will never ever ever look at you guys the same, and that’s a good thing."

Damon has been a hit with Dalkey locals since arriving there and even went viral last month after he was snapped out on a walk carrying a bag from the Irish supermarket Supervalu. 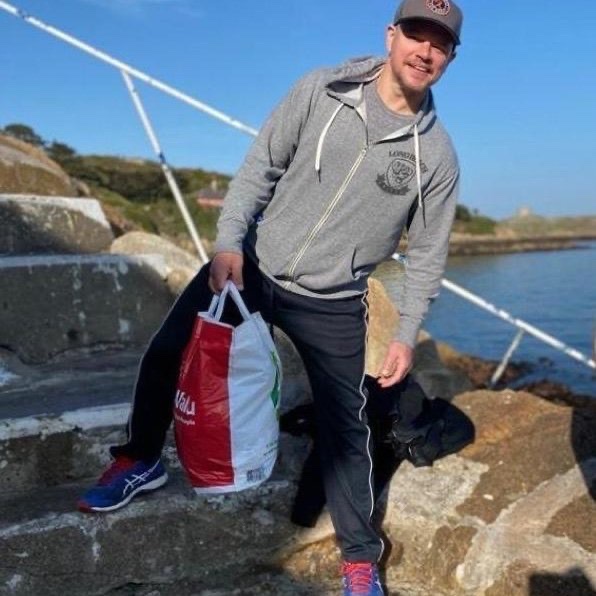 Dalkey residents have even gone as far as protecting him from press intrusion - something that has greatly amused Damon.

"I heard this story, laughed so hard and that’s when I realised how great this place was, and how protective everybody here is,” he said.

"You joined the group for one day before they found you out and booted you out, which is great!”

Damon also sought to clarify the contents of the Supervalu bag – beach towels, rather than beer cans as many Irish fans on Twitter had previously joked.

“To be fair, I’m sure there were cans in there originally, we just had to take ‘em out to put the beach towels in,” he said.

Despite having most of his family with him during this time of uncertainty, he also revealed his oldest daughter remains living in New York where she has already contracted COVID-19.

“Our oldest daughter is in college, obviously that’s been shut down. She’s in New York city and she had COVID really early on along with her roommates and got through it fine."

The good news for Dalkey residents is that Damon isn’t going anywhere anytime soon – he will be remaining in Ireland until the end of the school year and couldn’t be happier about it.

“This is one of the most beautiful places we’ve ever been,"” he said.

"I’m with my whole family, I’ve got my kids, and we have teachers with us because we were planning on missing school for about eight weeks.

"So we’ve got what nobody else has, which is actual live human beings teaching our kids, the schools are all shut down back home and all the kids are doing remote learning.

"So we feel guilty, we’ve got this kind of incredible set up in this place, it’s just absolutely gorgeous.”

He added: “We were supposed to leave last week because the movie was meant to be done by now but we’re staying ‘til the end of the kids’ school year just because it’s so peaceful here and everybody’s handling it so well."