THE TWO men found dead in the Irish Sea were allegedly involved in illegal puppy trading between Britain and Ireland.

Kevin James McKinlay, 46, and Sandy Hamilton, 35, both from Larkhall, south Lanarkshire, were found after RNLI Lifeboats from Northern Ireland, Scotland and the Isle of Man conducted an extensive search with HM Coastguard search and rescue helicopters across the northern channel of the Irish Sea.

The search was launched at 6.15pm on Saturday, May 6, when the two men disappeared after launching their speedboat from Port Logan in Scotland around 9am and failing to return.

Now, in footage obtained during a BBC investigation into puppy dealers, Sandy Hamilton can be seen being questioned by Scottish Society for the Prevention of Cruelty to Animals.

Mr Hamilton was stopped while departing a ferry from Northern Ireland in September 2015. 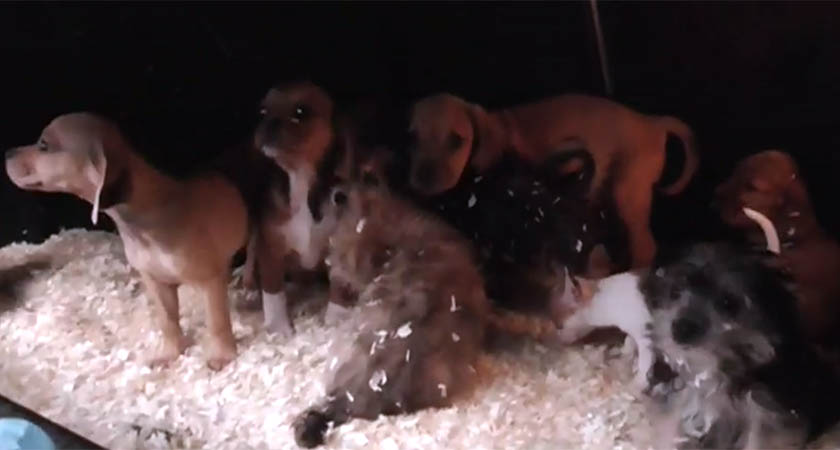 The puppies found in the boot of Mr Hamilton's car. (Picture: BBC Scotland)

Scottish SPCA officers found a litter of puppies in the back of Mr Hamilton's Range Rover.

Asked whether or not he had a transport certificate for the pups, Mr Hamilton replied: "If I do need one, I can get one."

The stop and search was performed as part of Operation Delphin, which was set up between Irish and British animal welfare and police authorities to halt illegal puppy smuggling between Ireland and Britain.

It is alleged that both Sandy Hamilton and Kevin McKinley were known for illegal puppy trading - Mr Hamilton for sourcing, McKinley for selling.

A Scottish SPCA undercover inspector told The Irish Post that an alternative route between Scotland and Ireland has been established by puppy dealers.

“Puppy trafficking has been monitored for some time under Operation Delphin and we have identified a particular route between Scotland and Ireland.

“We have seen the perpetrators develop more elaborate ways to source puppies undetected.

“Scottish SPCA are committed to improve the welfare of dogs and puppies within intensive breeding regimes," they added.

The search for the two men ended on Sunday afternoon, May 7.

Police Scotland have also said a report into the incident will be submitted to the Procurator Fiscal.