THE MURDER of Irish pensioner Tommy Ward is to be reviewed by a specialist police team for 'further investigative opportunities'.

Mr Ward's murder will be reviewed alongside 27 other unsolved murder investigations since 1962 by South Yorkshire Police.

The Major Incident Review Team was set up in 2016 and officers have been "carefully sifting through" evidence from the unsolved cases.

"Officers have been carefully sifting through and reviewing large quantities of evidence to identify if there are any further investigative opportunities which may now arise, taking into account developments in how investigations are now conducted and advances in forensic science," a police spokesperson for South Yorkshire said.

However, the current focus of the work is to assess any investigative opportunities and this will take some time to complete.

“This is vital to ensure that all positive lines of investigation are identified, progressed and exhausted so that we maximise our chances of identifying the offenders and bringing them to justice.

“We recognise the distress and impact that losing a loved one has on families of homicide victims and understand their need and desire to see justice be done for these horrific crimes.

"We would like to reassure all families of homicide victims that we continue to seek the cooperation of the public and offer our ongoing support.”

He was left with a broken jaw and a fractured skull, as well as broken ribs and a finger hanging just by its tendons.

A six-hour operation was required to treat his head injury and he had to have his finger amputated.

As well as his injuries, as safe containing £30,000 of Mr Ward’s life savings were also stolen. It was later discovered empty eight miles from Mr Ward’s home on a canal bank in Rotherham.

“He opens his eyes and sees us but he hasn’t spoken at all since it happened.”

He never recovered from his injuries and died in hospital almost five months later on February 23, 2016 as a result of his injuries sustained during the attack.

A proud Irishman, Mr Ward was regularly seen in his local pub, The Manor, wearing Irish T-shirts and hats.

He was a reader of The Irish Post – which his family read to him in hospital – and a fan of Irish music. 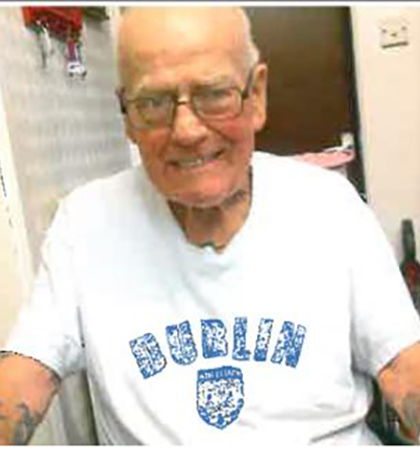 Having spent his life working firstly in the British Army and later in the nearby Maltby mines, Mr Ward was enjoying his retirement and made regular trips to Ireland.

His roots in Ireland went back to his grandmother, who came from Co. Galway.

South Yorkshire Police issued a renewed public appeal one year on from Mr Ward's death in February this year after new CCTV emerged of a car travelling near to his home on the morning of the attack.

The footage showed a Saab 93 drive past the ex-miner’s property on two separate occasions less than an hour before the attack on the pensioner.

The car can be seen turning into Mr Ward’s road, driving by his home, performing a u-turn and staying in the area for 24 minutes.

It was later seen on CCTV turning back onto Grange Lane from Salisbury Road at 05:40.