Noeleen Delaney, Westminster's own Mrs Doyle, retires after 30 years of serving tea in the House of Commons

NOELEEN DELANEY said her final farewells to MPs and colleagues as she retired after almost 30 years of service in charge of the members’ tea room in Britain’s House of Commons.

In that time, Noeleen, 62, who hails from Glenties in Co. Donegal, saw no less than six prime ministers come and go in Westminster.

And much like the character Mrs Doyle from the Father Ted series, Mrs Delaney never failed to keep every one of them fed and watered throughout her lengthy career.

Pleased to see another woman now taking up the post, following the recent appointment of Theresa May to the position, she told The Irish Post: “I think she’ll do a very good job. Tony Blair brought in more women MPs and they’ve always appreciated the long hours we in the tea room worked while juggling our family lives.” 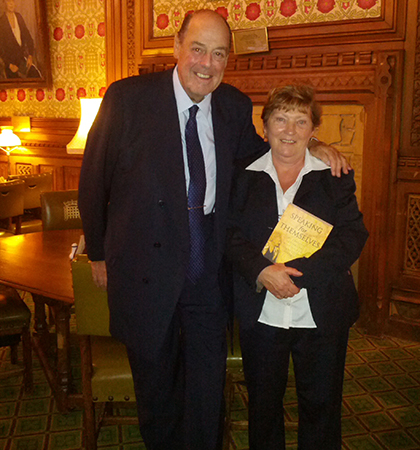 She was a particular fan of John Major and Tony Blair (whose grandmother was also from Donegal), she admits, stating: “I would’ve had very brief chats with them while working, though I don’t recall what they were about.”

Sir John Major thanked her for her work this week, saying: “Noeleen and her colleagues kept us all fed and watered, especially when we had to work through the night in the House. Always professional, and with great good humour, she was one of the hidden stalwarts who were indispensable to Parliament. I send my grateful thanks for her service, and my warmest wishes for a long and happy retirement.”

One firm friend she made during her time was the late Tony Benn, and his son Hilary, also a Labour MP, who added: “Noeleen has been a Parliamentary treasure and a constant presence in the tearoom over the years. She has looked after us night and day with kindness and that twinkle in her eye. My late father was also very fond of her and we’ll all miss her greatly.”

His Labour colleague and party whip, Irishman Conor McGinn, added: “One of the first things I would do on arriving in on a Monday was catch up with Noeleen about the weekend's football and hurling.

"She was better informed than the boys on the Sunday Game. Noeleen was the grand dame and boss of us all.”

Noeleen emigrated to London in the mid 1970s and began working in the Houses of Parliament in December 1986, promptly being put in charge of the tea room where MPs meet, plot and gossip, safe from journalists, who aren’t allowed in there.

“There were a dozen other Irish ladies there at the time, so I was in good company,” she recalls.

“From my first day in the role I was in love, the camaraderie with the staff helped the days fly by and I’ve loved every minute of it – even when hotly discussed topics like the Maastricht Treaty debates in the early 90s, the Invasion of Iraq in 2003 and the more recent vote on Syrian airstrikes saw us in the kitchen until the early morning.

“Being from Donegal, which borders Northern Ireland, the Good Friday agreement signed in 1998 has always stayed close to my memory,” she added.

“Mo Mowlam, the former Secretary of State for Northern Ireland, and a driving force behind the momentous pact, was an MP I especially looked out for and her early retirement and passing from illness was something that deeply saddened me.”

In 2005, Noeleen was awarded an honorary MBE by the then Speaker of the House Michael Martin in recognition of her service, and she was delighted to meet Queen Elizabeth some time later at one of the Royal garden parties.