Baby on board: Dr Alan Devine, a GP from Donegal, was on the right train at the right time yesterday (Image: Twitter/Irish Rail)

A WOMAN gave birth to a healthy baby girl on a commuter train from Galway to Dublin after a heroic off-duty doctor rushed to her aid.

The young mother went into labour as the service to Heuston Station in the capital was approaching Kildare just before 5pm yesterday evening.

Also on the train was Dr Alan Devine, a GP from Donegal, who was watching the hit series Chernobyl on his iPad when he noticed some "commotion going on".

He told the Irish Times: "We were stopped for about 10 minutes at Kildare when I paused my iPad to hear what was going on.

"The woman sitting opposite me then asked if was a doctor, and I said I was. She told me there was a woman giving birth further up the train, so I looked up and could see a security guy in hi-vis between carriages holding a towel up to the door.

"I could hear moaning so I asked the woman to mind my stuff and I ran up". 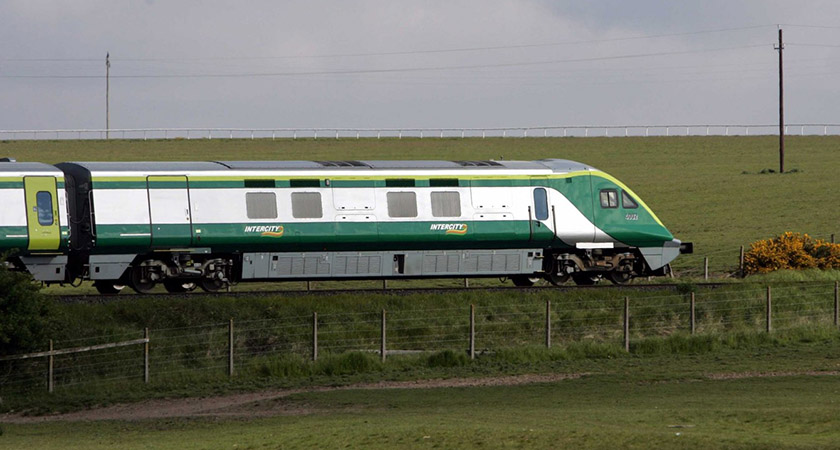 The drama occurred around 2 hours into the 3.04pm Galway-Dublin service on Tuesday (Image: RollingNews.ie)

Dr Devine said the poor mother, who had been travelling on her own, was "in the throes of labour" when he got to her.

He added: "By the time I got there, there was a lovely Irish woman named Ellen on the phone to the ambulance crew.

"There was an Irish nurse helping her, and there was an American tourist in her seventies holding her hand and coaching her through the labour".

The GP said within about 30 minutes the baby was born, to the relief of everyone on board - but especially mum.

"Honestly, we all nearly cried as well because there was a lot of tension and stress," he recalled.

"Things calmed down then."

One passenger who was also on the train tweeted a thank you to everyone who helped the woman.

Fair play to @IrishRail employee (from Croatia), the American tourist, Irish girl and off duty doctor in delivering this baby! Everyone on board was very patient and ultimately delighted once we heard the baby girl take her first breath!

Ciaran Flynn wrote: "Fair play to @IrishRail employee (from Croatia), the American tourist, Irish girl and off duty doctor in delivering this baby!

"Everyone on board was very patient and ultimately delighted once we heard the baby girl take her first breath!"

We love a happy ending!