Philomena urges forced adoption victims in Britain to speak out

PHILOMENA Lee has urged thousands of Irish women in Britain whose children were sold for adoption to speak out about their suffering.

The Hertfordshire-based woman said mothers who fled here after losing their children in Ireland’s homes for unmarried women should not feel ashamed about their past.

She claimed their stories are pivotal in her campaign to pressure the Irish Government to release more than 60,000 files about shocking “forced” adoptions.

“I hope people of my own age that were frightened and scared in those days will come forward. It would help the younger generation who are looking for their mums and dads,” she said.

“A lot of my age group still do not like to tell the story, but it would be very helpful indeed if some of them could.”

The Church-run organisations have been accused of selling the children of unmarried mothers against their will.

This week Ms Lee travelled to Dublin to make a dramatic call for the Irish Government to break down the walls that keep thousands of mothers from finding their natural children.

The 80-year-old has joined forces with campaigners to put pressure on the Government to come clean about what is being referred to as “the latest Church-State scandal”, following the emergence of shocking State-sanctioned abuses in Magdalene Laundries and Industrial Schools.

“We will not tolerate more of their “deny ’til we die” strategy. We want appropriate legislation now,” said Susan Lohan, co-founder of Adoption Rights Alliance.

“With the launch of The Philomena Project, we can ensure Irish legislators will be held to account at home and internationally for their continued denial of the rights of at least 60,000 adopted people and an almost equal number of mothers,”

The Philomena Project calls on the Irish Government to work with the Supreme Court to reverse a 1998 ruling that adoptees do not always have the right to know the identity of their natural parents. 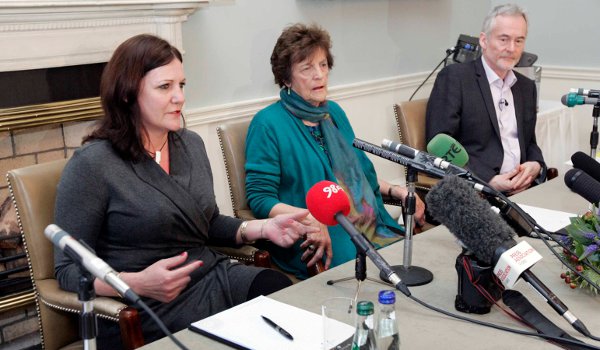 The project aims to secure the release of tens of thousands of files currently held by the HSE, private adoption agencies and representatives of the Catholic Church, which could be used by adopted children and natural mothers to trace one another.

The law currently prevents both parties from being given any information that could be used to identify one another, Ms Lohan claims.

Of the 60,000 mothers who lost children in mother and baby homes, Adoption Rights Alliance estimates that around 20,000 fled to Britain.

The lives of vast numbers of those women have been “ruined”, Ms Lohan added.

“You can identify these women at 30 paces,” she told The Irish Post. “There is a frailty and a vulnerability about them because what happened to them has turned them into shadows of themselves.”

Among the many people who have contacted the organisation since the release of Philomena are some who claim they were given no choice about giving up their child for adoption.

“I am aware of a case from the 1970s where a woman in her 20s was locked in a room with a solicitor, a social worker and a nun who all shouted at her and said she could not leave the room until she had signed the papers to hand over custody of her child,” Ms Lohan said.

Several people in Britain who have been directly impacted by what happened in mother and baby homes have spoken to The Irish Post about their plight.

“My mother broke down throughout her life and cried about what happened to her,” said Martin Husk, whose mother had her first child adopted by a couple in the US during her time at a mother and baby home. She never recovered and never forgave the people who were responsible for it.”

Martin Sixsmith, the journalist who broke Philomena Lee’s story in his 2009 book The Lost Child of Philomena Lee, has claimed that couples wanting to adopt from mother and baby homes had to make a donation to the Church.

Speaking on RTÉ’s Late Late Show on Friday, he said 2,000 children were sent across the Atlantic because US couples “were able to make larger donations”.

The Sacred Hearts of Jesus and Mary, which ran the mother and baby home where Ms Lee lost her son Anthony to a US couple, has denied that it sold any of the children adopted from natural mothers in its care.