Orange parades pass the Blessed John Dun Scotus Catholic church in the Gorbals, Glasgow, where a counter demonstration was held by campaign group Call It Out (Image: by Jeff J Mitchell/Getty Images)

POLICE in Scotland have condemned 'racist and sectarian singing' by people attending Orange Order processions in Glasgow in Saturday.

More than 50 marches took place across the Scottish city, which saw 32 roads closed off to facilitate the events, which drew around 13,000 people.

Campaign group Call It Out held counter demonstrations outside Catholic churches that were on parade routes.

While Police Scotland said arrests had been made for a variety of offences, the Scottish Orange Order has claimed no marchers were arrested.

"We are aware that on a number of occasions today (Saturday) there have been outbreaks of racist and sectarian singing by some of those attending to support the Orange Order processions, this is utterly unacceptable and we completely condemn this behaviour," he said.

"Where possible, we are seeking to take action against those intent on causing harm and dividing our communities, we have already made arrests in connection with various offences and will continue to do so where required. 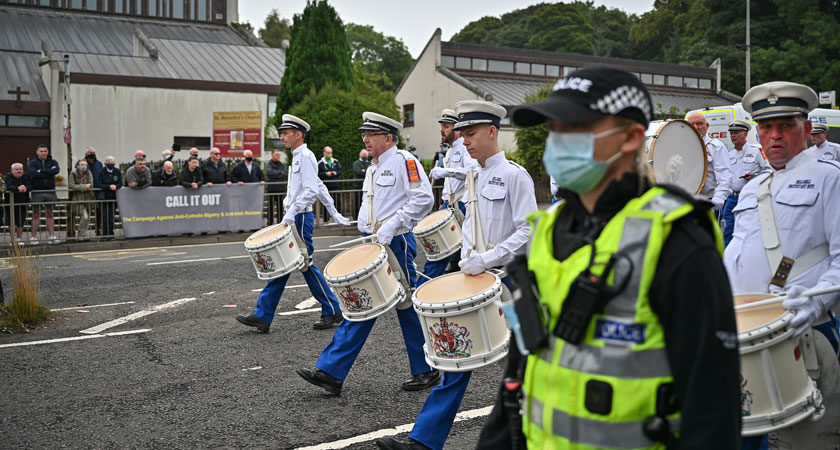 "With large crowds gathering today, our main priority has been public safety and to ensure minimum disruption to the wider public.

"Once again, we see a number of people intent [on] causing offence and stirring up hatred by singing unacceptable sectarian and racist songs, I want to again condemn this behaviour in the strongest possible terms.

"It is clear that sectarianism remains a serious, ongoing problem in Scotland and whilst policing has an important role in tackling this type of behaviour, this is a collective problem and needs to be addressed in a collective, collaborative manner."

Campaign group Call It Out said it would continue to hold demonstrations at marches until they were re-routed away from Catholic churches.

Addressing supporters on Saturday, Chairperson Jeanette Findlay said: "The courts have told [Glasgow City Council] they have to power to re-route, that's what they can do, that's what we have asked them to do and that's what we will continue to ask them to do.

Our chair @JeanFind: @GlasgowCC has the power to re-route anti-Catholic marches away from churches - they've been told this by the courts.

"Until then, all we can do is stand in witness to the hatred our community has had to put up with for its entire time in this country." pic.twitter.com/A8g9sXN14u

"Until then, all we can do is stand here and stand witness to the hatred that our community has had to put up since its entire time in this country."

In a statement on their Facebook page, the Scottish Orange Order said no marchers had been arrested.

"The Grand Orange Lodge of Scotland has this morning contacted media outlets regarding inaccurate reports of marchers being arrested at Glasgow's 200th anniversary Boyne Celebrations," read the statement.

"We can confirm no marchers were arrested."

The weekend’s marches marked the 200th anniversary of Orange parades in Glasgow, which mark the Battle of the Boyne in 1690 in Co. Meath, Ireland.