THE POPE has called on the watching world to come together to rid society of all inequality once the world’s ‘time of trial’ has passed.

Speaking in his homily at the mass held to mark Divine Mercy Sunday, Pope Francis warned any future failure to support the poor and impoverished in recovering from the pandemic would result in “an even worse virus”.

The service saw the Pontiff leave the Vatican for the first time in more than a month, with the leader of the Catholic Church delivering his address in the nearby church of Santo Spirito in Sassia.

Pope Francis was previously pictured walking the deserted streets of Rome to visit two shrines back on March 15 where he prayed for an end to the Pandemic.

Since then the Pope has adhered to Italy’s strict lockdown rules, with all of his subsequent Masses and general audiences held indoors and without any members of the public in attendance.

In both his homily and traditional Sunday message, Pope Francis said the aftermath and recovery from the pandemic was a time to heal injustices.

“Now, while we are looking forward to a slow and arduous recovery from the pandemic, there is a danger that we will forget those who are left behind,” the Pontiff said in his homily.

“The risk is that we may then be struck by an even worse virus, that of selfish indifference. A virus spread by the thought that life is better if it is better for me, and that everything will be fine if it is fine for me,” he said.

The Pope added the pandemic “reminds us that there are no differences or borders between those who suffer”. 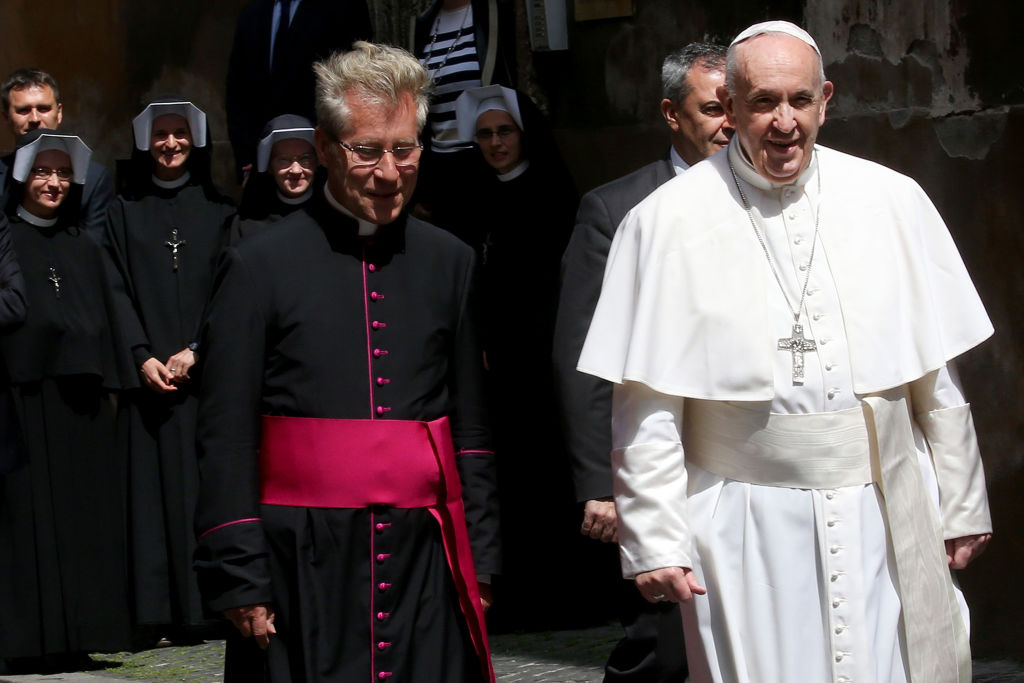 He reiterated his stance in the noon message that followed the Mass and called for “just sharing among nations and their institutions in order to confront the current crisis in a manner marked by solidarity”.

Pope Francis has been an outspoken presence through much of the pandemic to date.

Earlier this month he used an exclusive interview with The Tablet to pay tribute to frontline workers with everyone from doctors to supermarket staff dubbed “the saints who live next door” by the Pontiff.

In the interview the Pope said he “thinking at this time of the saints who live next door.”

“They are heroes – doctors, volunteers, religious sisters, priests, shop workers – all performing their duty so that society can continue functioning.

“How many doctors and nurses have died! How many religious sisters have died! All serving … If we become aware of this miracle of the next-door saints, if we can follow their tracks, the miracle will end well, for the good of all.”