A PREVIOUSLY UNSEEN correspondence from director John Ford to Irish actress Maureen O’Hara has been discovered.

The letter, which is thought to have been written during filming on The Quiet Man, was found by O’Hara’s grandson Conor Fitzsimons in her house.

One of several love letters penned by Ford in tribute to O’Hara, The Irish Times reports that the letter was discovered tucked in a book about Ashford Castle in Co Mayo.

More significantly still, it was written on paper from Ashford Castle and is undated, adding further weight to the idea it was written during filming on The Quiet Man.

The majority of the film’s cast and crew stayed at the luxury hotel in Co Mayo for the duration of the shoot in June 1951.

Born Seán Aloysius O’Feeney, the Irish American director was 26 years older than O’Hara and but a emotively volatile relationship with the young star, who he regularly quarrelled with yet also appeared to adore.

Some of that emotion comes across in the letter, with the extracts published by The Irish Times perfectly highlighting his infatuation with O’Hara.

“Oh Maureen, my darling, I love you so much! Thank you my love for the few months happiness you have given me. I miss you so much," Ford writes.

“God, I long for you. I dream of you. Your face is constantly in my dreams."

Fitzsimons told The Irish Times that while O’Hara was aware of Ford’s infatuation with her, he found little to suggest those feelings were reciprocated.

“It’s unique in that there was an unspoken thing that Ford had a crush on her. I think only a few people like John Wayne and herself knew about it,” he said.

“She used to joke that Ford had a schoolboy crush on her, but she said that about a lot of men.”

Ford goes on to talk about his new maid and his dislike of her, stating that she “insists on closing the hall door to the breakfast room so I can’t see your picture smiling mockingly at me - do you not know the picture?

“It kids me all the time up on the wall making fun of me.”

Interestingly, the filmmaker also makes mention of IRA member Ernie O’Malley, who served as a a consultant on The Quiet Man, referring to him as “a great man still suffering from Black and Tan torturing.”

The newly discovered love letter is one of several Ford wrote which have been steadily unearthed since O’Hara’s passing in 2015. 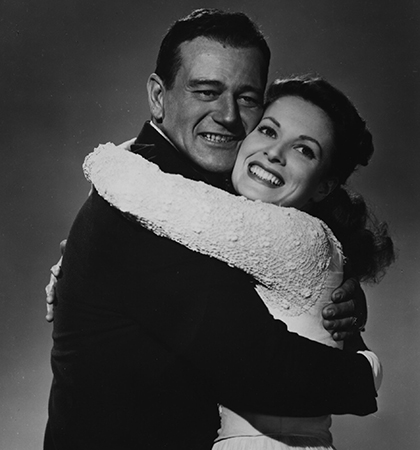 Born in 1920, O’Hara endured a rocky relationship with Ford who once famously punched the actress in the back of the head at a party.

Despite this, she remained full of admiration for the filmmaker, who she felt drew out some of her best performances.

Writing in her 2004 memoir Tis Herself, O’Hara said: “For years I wondered why John Ford grew to hate me so much.

“I couldn’t understand what made him say and do so many terrible things to me. I realise now that he didn’t hate me at all.

“He loved me very much and even thought that he was in love with me.”