HOLLYWOOD LEGEND Russell Crowe is the talk of Ireland after sharing a hilarious and hair-raising story with viewers during an appearance on the Late Late Show.

Speaking from the comfort of his home in Australia with a Guinness tap close to hand, the Gladiator actor decide to share a behind-the-scenes story from one of his early films.

Crowe was appearing as part of a special pre-recorded message played at the start of the show.

The LA Confidential star is a big fan of Irish chat show, having recently taken to Twitter to heap praise on the annual Late Late Toy Show edition.

So when he was offered the chance to record a message to mark the start of what is the 59th series of the RTE show, he jumped at the chance.

Even better, he was able to regale fans with a story that was not only scary and funny but delivered in the exact amount of time it took Crowe to pull a pint of Guinness.

It involved working with a tarantula on a low budget 1994 film called Rough Magic, which also starred Bridget Fonda.

"What I said I would do is try and tell you a story in the time it usually takes me to pour a pint, so we can share a pint and have a little tale,” Crowe began.

"This particular tale involves a movie that I did in 1994, so I wasn't really famous b**tard yet.

"I was famous enough to be making international movies and I got to work with an actress called Bridget Fonda. We shot all over Mexico and in Guatemala."

According to the Oscar winner, one particular scene called for a tarantula to crawl over him.

He explained: "There was one particular scene which was shot in Los Angeles when I read it in the script, it says that the character I'm playing is going to be lying on the ground and tarantula will crawl up his chest, go up to his neck, and into his open mouth, so I thought 'that must be something they are going to do with special effects or whatever', on the day, it turns out no.

"They had an animal wrangler and he brought some tarantulas and one of the producers took me aside to assure me it's ok because the tarantulas have been milked for their venom, so their not actually dangerous."

Unfortunately, as is often the case in film work, multiple takes were required. Meaning multiple takes involving a tarantula climbing up his chest and into his mouth.

"A tarantula the size of my hand is put onto my chest…and 'action' …it runs up and into my mouth and then the trainer just plucked it out of my mouth - I'm serious, it was a low-budget film.

"We do a take and I say 'OK, we did all the things we were asked, can we move on?', and they said 'no, we will adjust the lights' and we did it again, and again."

Thankfully, the spider had no venom.

"At one point I talked to the trainer and I said 'pretty lucky that you can actually take a tarantula and milk it so they become safer and he said 'huh?', so my one safety net wasn't there.

Multiple takes followed. He hated every single minute of it.

"My neck is getting wet, I'm hot and sweaty, the tarantula comes up my neck and stop, and opens and pushes into me.

"Nine takes with a live tarantula crawling up my chest into my mouth."

Things took a turn for the worse, however, soon after when Crowe noticed a rash had appeared on his neck.

He went to the doctor. Fearing the worst.

Instead, it was something much weirder. 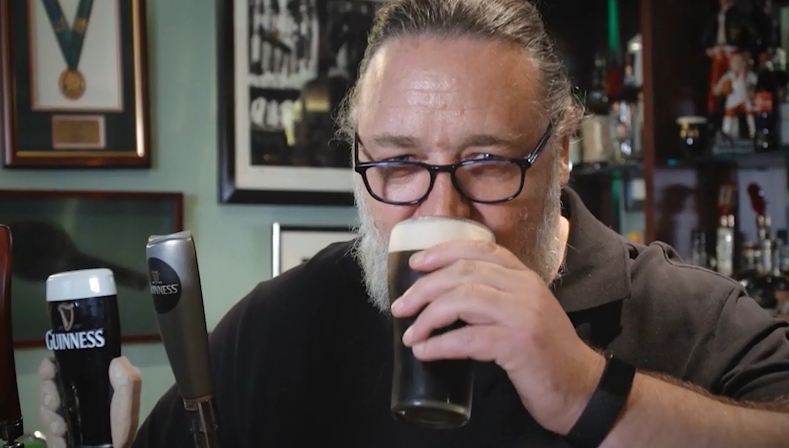 "The next day I got this massive rash and went to the doctor and he said that apparently at some point in time, the tarantula has released these little fine hairs and one of them has gone into the pore of my neck, some part of the venom of the tarantula is now in my body.

"Apparently that time it stopped on my neck, the heat, and the particular moistness of my skin the tarantula found quite attractive.

"So anyway, I believe, and I stand to be corrected, in front of Brendan and Mr Harris having a beer here with you Ryan, and all the folks at home, I do believe I am the only Oscar winner in history to be f***** in the neck by a tarantula. Cheers."

The 56-year-old is a big fan of Ireland and is planning on returning to Dublin soon, having previously visited the capital on five separate occasions.