BELFAST, NORTHERN IRELAND - OCTOBER 08: General view of the stadium as the teams line up before the FIFA 2018 World Cup Qualifier between Northern Ireland and San Marino at Windsor Park on October 8, 2016 in Belfast, Northern Ireland. (Photo by Charles McQuillan/Getty Images)

SECURITY fears have been raised over the possibility of Belfast team Linfield facing Scots Celtic FC in Belfast ahead of July 12.

The two teams are due to clash in Windsor Park in south Belfast on July 11 in the second qualifying round of the Champions League if Linfield beat La Fiorta from San Marino next Wednesday, June 28.

The game, if it goes ahead, will be held on the eve of July 12, the marching day for the Orange Order and Ulster loyalist marching bands across Northern Ireland.

The parades mark the victory of William of Orange over Catholic King James II at the Battle of the Boyne in 1690. 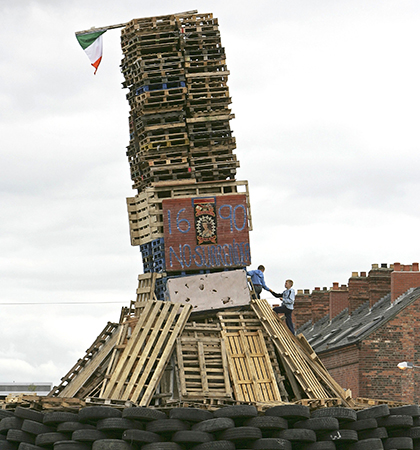 On July 11, bonfires are erected and lit across Northern Ireland, and have previously featured an Irish flag, a Glasgow Celtic shirt or a Catholic emblem on the top for a ceremonial burning.

According to the Parades Commission, there are 38 marches scheduled for July 11 across Northern Ireland.

Crowd safety expert Andrew McQuillan told Stephen Nolan on BBC NI that there is no 'worse date' for a football match in Northern Ireland.

"The security bubble will not just be the stadium, there will be significant security across the city.

"The PSNI will have to bring in outside assistance and an intelligence unit from Scottish Police will come over and help with the ultra fans from the Celtic team that could cause destruction - that happens for every team.

"There is no worse date to hold a football match of this scale in Northern Ireland than July 11," Mr McQuillan said.

In a statement, PSNI Operations Superintendent for Belfast, Norman Haslett said: “We are aware of the possibility of a Belfast fixture next month between Linfield and Celtic.

"Discussions are obviously at a very early and tentative stage as the game has not been confirmed.”

Celtic FC told The Irish Post they are not commenting on the possible match fixture.