SINEAD O’CONNOR, never one to pull her punches, has called for a boycott of iconic rock magazine Rolling Stone because the current issue features Kim Kardashian on the cover.

In a strongly-worded post on her Facebook page, the singer wrote: “What is this c*** doing on the cover of Rolling Stone? Music has officially died.”

She continued: “Who knew it would be Rolling Stone that murdered it? Simon Cowell and Louis Walsh can no longer be expected to take all the blame. Bob Dylan must be f***ing horrified. #BoycottRollingStone.” 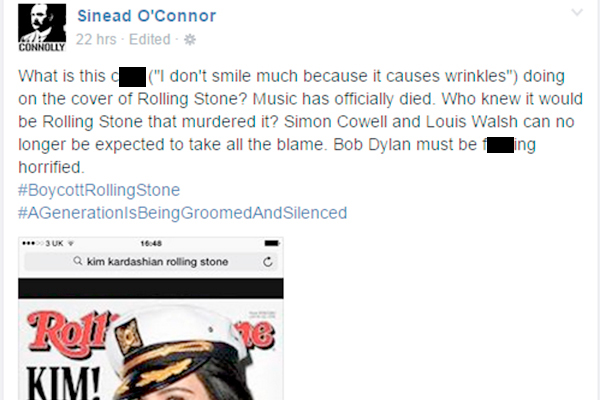 The US publication trailed the interview with the words: “Reality-TV juggernaut, selfie queen, actress, model, mother, Internet-breaker, entrepreneur and video game subject Kim Kardashian has something to say: ‘Believe that I am so much smarter than I'm portrayed.’ The 34-year-old megastar talks about her scandals, family, and feminism in our wide-ranging new cover story."

Sinead O'Connor — who now lives in London — has called for a boycott of Rolling Stone.

So far, more comments have been in favour of the Irish singer's remarks than not. Supportive posts on Facebook include: “There was a time when we had real heroes. I am glad Sinead used her voice to shake up the path."

Another wrote: “This is horrific!!! I recall the day when it was HUGE to be on the cover of RS! Disgusting. Because she's married to an "artist" ? I back Sinead O'Connor 100% and have since I was a kid! They finally sold out like MTV did!!!"

However others were less enamoured with O'Connor's post. One Facebook user replied: "Ah now. You're right that Rolling Stone is the wrong place and Kim's a bit annoying but there's no need to go calling other human beings c***s publicly. Tis a problem with the magazine, she's a person like. I admire you and all but I thought you'd have more poise really."

This is not the singer's first time at taking a swing at a fellow entertainer.

O'Connor and Miley Cyrus began a nasty feud in 2013 after the Irishwoman penned an open letter to the young Wrecking Ball singer, warning her about wearing scant clothing in her live appearances and videos. She told Cyrus not let the music industry “make a prostitute of you”.

Cyrus quickly fired back on Twitter, comparing O’Connor to American actress Amanda Bynes, who was publicly battling mental health issues at the time. O’Connor then responded by threatening to sue the pop star and severely criticised Cyrus for mocking people dealing with mental health problems.