A SCATHING obituary for a woman who abandoned her two children to start a new life with her husband's brother has gone viral.

Kathleen Dehmlow passed away last month at the age of 80.

Her obituary, published in the Redwood Falls Gazette, may only total 105 words but over the course of five increasingly spiteful paragraphs, it tells a fascinatingly bleak story.

Kathleen was born on March 19, 1938, to Joseph and Gertrude Schunk of Wabasso, Florida.

She went on to marry Dennis Dehmlow in 1957 and had two children named Gina and Jay.

The obituary takes a turn for the worse from there though. 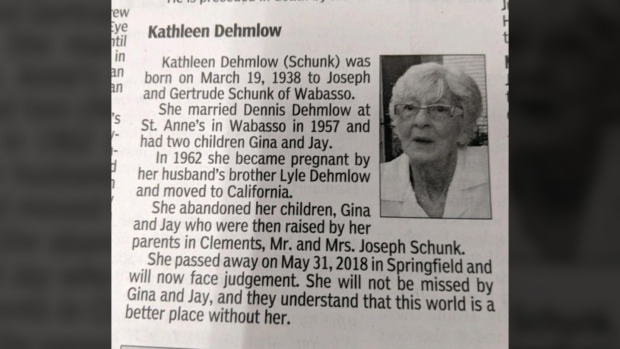 "In 1962 she became pregnant by her husband's brother Lyle Dehmlow and moved to California," it reads.

"She abandoned her children, Gina and Jay who were then raised by her parents in Clements, Mr. and Mrs. Joseph Schunk."

Evidently the work of her surviving children, Gina and Jay, the obituary's most cutting remark is saved for last:

"She passed away on May 31, 2018 in Springfield [Minn.] and will now face judgement. She will not be missed by Gina and Jay, and they understand that this world is a better place without her."

Published alongside a photo of Kathleen, the obituary has since gone viral, with many left fascinated by the jaded and incomplete story it tells of one woman's life.

Others, meanwhile, have reacted with shock at the family's decision to speak ill of the dead.

What do you make of the obituary?