PHILOMENA Lee’s story is yet again a place where Ireland must confront what it did to its citizens. Industrial schools, Magdalene laundries, emigrant ships, where does it all end?

Philomena Lee’s dignified, 80-year-old face is another face that passes into our consciousness as representative of those who Ireland, holy Catholic Ireland, treated with disregard, callousness and a fundamental denial of basic human rights. That is merely the truth.

That is not to judge the past by the standards of today for when was it ever right for an institution and a state to deny a mother merely because they deemed her morally susceptible for having sexual relations outside of the time when they said she could.

Philomena Lee’s story of a motherhood denied — and what she has confronted in her own attempts to uncover the truth — is a familiar one, now that the shadowy secrets of Catholic Ireland have leaked out, though one that bears repeating.

With her son until he was three-and-a-half years old, Philomena Lee never gave up on trying to contact him even after he was adopted by a wealthy American couple.

He too, as he came into adulthood and even with a very successful life in the American government, searched long and hard for his mother.

Both were met with a wall of silence by those who needed only to look in certain files or open certain desks or ask certain people. Neither was told that the other was searching too and with astonishing cruelty Philomena’s son was actually told that his mother had abandoned him when he was two weeks old. 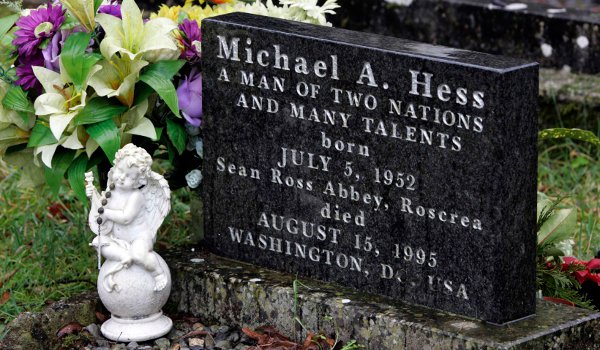 Philomena Lee's son died before she could contact him

It is hard to understand the mind that would do that. Incompetence might lead to a mistake, for sure, but to offer such a specific and definite time for his mother to have been around suggests a malice that hasn’t been seen since the pages of the Ryan Report.

Despite the awful tragedy and sadness of her story, her son dying before she ever contacted him or knew he was looking for her, this woman’s insistence on campaigning for the rights of all those like her suggests that there are indeed Irish heroes.

Like those brave and inspiring Magdalene women, Philomena Lee has risen above the judgement and cruelty of those who were supposedly her betters in order to assert her rights and those of her child.

Like so much about Ireland it takes an Irish person from outside Ireland, one of the many thousands who this country deemed surplus to our society, to come here and tell us what we are like.

That those excluded from Ireland’s story, those laundry women, those industrial school children, those unwanted ’50s emigrants, insist on being included, insist against all odds and against official coldness and disregard, is the very reason that Irishness itself survives and is the powerful and wonderful thing it is, for without them it would merely be the story of self-satisfied, narrow minded bigots.

Philomena Lee’s insistence on bringing to all our attention that there are still 60,000 adoption records kept in State and institution files that could allow living people to find out who they are is a chilling echo of what has happened since Enda Kenny’s moving statement to the Dáil about the Magdalene women was followed up by official heel-dragging whereby some women have died only ever having that speech as their compensation.

Philomena Lee’s story needs to carry this coda too.

Movies are all well and good, media attention is fine and dandy, if you’re lucky Bono might even get wind of you if he isn’t speaking of how Enda Kenny makes him feel proud to be Irish, but in the end the media turns away, the fine words and speeches go down on the record as fine words and speeches and what was promised gets shuffled along a well-paid desk.

Then official Ireland and those who represent it move on to something else and the cold disregard you always felt comes whistling by again.

I truly hope that is not the case for Philomena Lee, she has been through enough and her beautiful dignity and her truly Christian sense of forgiveness deserve better, but she is not dealing with people with a good track record.

For now though, from here, from the hills of Ireland and the fields and the streets, we can at least thank her for coming home to us.