The Jockey's Journal: Recalling the tale of my most painful injury as a jockey

xxxx during the 2016 Crabbie's Grand National at Aintree Racecourse on April 9, 2016 in Liverpool, England.

THE recent double injury to young David Mullins is a major blow to the Grand National winner but I've no doubt the youngster will be fighting fit in no time.

The 19-year-old was hospitalised after suffering a broken collarbone and a collapsed lung in a fall at Ballinrobe last Tuesday evening, and it got me thinking about all the injuries I've suffered throughout my career.

A broken collarbone is an average injury for a jockey - it's as common as a boxer breaking a nose - most jockeys have experienced that or at least accept that they will before they're done with the sport.

David's punctured lung is a bit more serious though. I've done my lungs in before, they can be a bit temperamental and may take up to six weeks to straighten out, but I think he'll be aiming to be back for the Galway Festival.

But as a sportsman, you think a bit differently, and in that sense the one that has kept me out the longest was when I did my ankle in and was out for 15 weeks. At that moment in time, everyone was taking notice of me because I was hitting the top targets, but that injury really set me back.

I once punctured my lungs and cracked my ribs – that was eight weeks out. But I think the worst injury I've ever had, without even realising it, was when I fractured my C6 vertebra, which is located in the inferior end of the neck just above the thorax.

It still aggravates me to this day. I never realised that I'd done it, so I continued riding and it wasn't until about three years after that when I had to go for an x-ray after requiring some stitches, and it was then that they found a fracture to my C6.

As jockeys, when you take a bad fall on these fast grounds it has a whiplash effect and that makes it harder to get a proper conclusion. If you walk into a hospital in your riding gear and say you've come off your horse and have a sore neck, they'll take one look at you and say 'it's just whiplash'.

And that's what happened me, so it took three years for me to realise I had that fracture. I suppose you learn to develop your pain threshold and as a result you become a bit ignorant to injury.

That was my most serious one, but not my most painful. That accolade goes to the infection I had on my shin.

Allow me to explain. On both sides of your legs you have a strap that tightens the saddle onto the horse, it's just like a belt buckle only smaller. But, anyway, one day I left a little flesh exposed and I got myself a shin rub and it tore away some flesh. 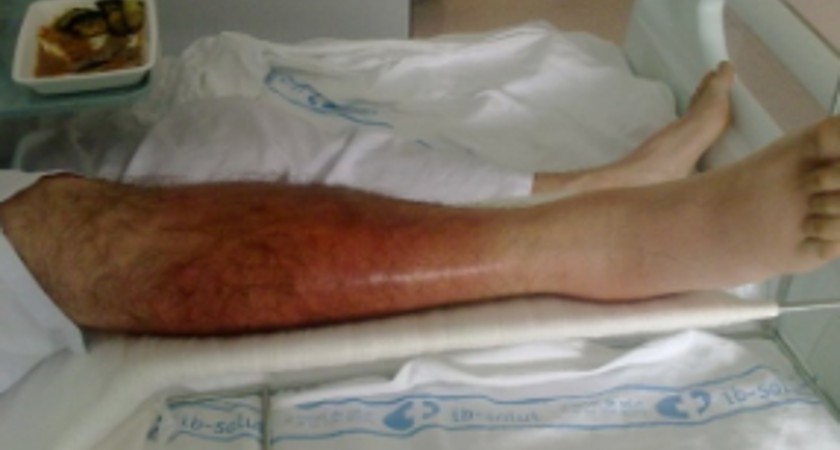 How my leg looked after the infection spread

It wasn't anything major, or so I thought, but I went on my honeymoon soon after and I was a bit run down and tired, and so it turned into an infection called cellulitis.

My sponsor was kind enough to give me his yacht for our honeymoon and I went swimming in the sea a day or two into the trip, but the very next day I was hospitalised in absolute agony.

I remember that night, realising something was wrong. I told my wife I didn't feel well and that my leg didn't feel right – she tried to tell me I was just drunk after the champaign we had!

That night, I could barely move and couldn't even rest the bed sheets on it. It was incredibly sore, like an explosive feeling, as though my leg was about to pop.

I spent a week in hospital but it took far longer to recover because I had to wait for the tissue to grow back and meet the skin of my leg – it wasn't just a matter of stitching it up and leaving it, it had to be left open.

I was still able to ride shortly after, but for the following six months I was riding with a big patch on my leg. It wasn't too sore to ride with, but the infection itself at the beginning, that was the most physical pain I've been in, and I've had no shortage of injuries from racing.