The Man in Ipanema: What we know about Kevin Mallon, the Irishman arrested for scalping tickets in Rio

ON Friday 5 August, news broke about an Irish man arrested for ticket touting in Rio at the 2016 Olympic Games.

In an extraordinary turn of events, the arrest of Kevin Mallon has turned into a fraud investigation by Brazilian police authorities and an investigation by the Olympic Council of Ireland into unauthorised ticket sales.

To catch you up to date, here are six things you need to know about Kevin Mallon and the Olympic tickets.

Mallon wasn't alone. Arrested alongside him was Barbara Carnieri, a Brazilian national and a translator who is also said to be an employee of a Marcus Evans Ltd company.

Why does that matter?

Marcus Evans Ltd also owns THG. Described as a corporate sporting hospitality agency, THG were also caught up in a ticket scandal during the 2014 Brazilian World Cup when CEO James Sinton was arrested for alleged ticket fraud, but he was later released and left the country before the case was heard.

So this is part of a larger operation....

After the fraudulent ticket sales during the Brazilian World Cup, Brazilian police have cracked down on touts. Along with Mallon and Carnieri, 10 other Brazilian touts were arrested, with a total of 1,000 tickets seized.

Director of ticketing for the Rio games, Donovan Ferreti said that Brazil learned from the tout ticket sales at the World Cup and  "created a group with the police around two years ago exactly to fight against this kind of sale." That group made the arrests on touts over the last few days.

A report by Irish broadcaster RTÉ, claims Brazilian police chief, Fernando Veloso, said that the tickets Mallon had in his possession were not fake, saying, "these are real tickets. They are originals. They are offered as part of the package, facilities like the transport of passengers, and other things like that."

According to this report by Globo, Mallon is currently detained in a prison in Rio de Janeiro and is facing charges of the possession of false tickets, associating with criminals, and touting.

After his arrest on Friday, it's understood statements were taken from would-be ticket buyers, and according to Globo the Brazilian broadcaster, a judge ordered the seizure of the tickets, as well as Mallon's laptop, phone, passport, and USB drives.

During a search at his alleged accommodation in Rio, police recovered over 800 VIP Olympic tickets that they have said were intended to be illegally resold to wealthy clients at massively inflated prices. In the video, obtained exclusively by the Daily Mail, police officers from the fraud team are seen searching Mallon's lodgings and uncovering the tickets to the Opening and Closing ceremonies.

What's this got to do with the Olympic Council of Ireland? 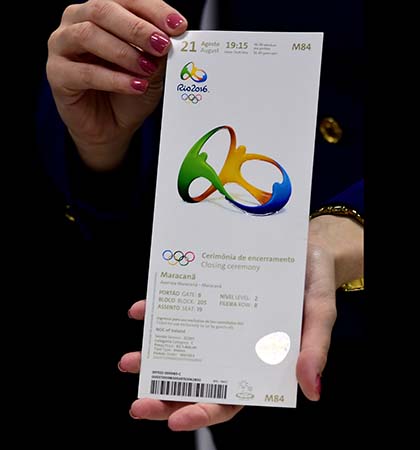 A ticket for the Rio Olympics seized during a search of an apartment after the arrest of Kevin Mallon bears the logo of the Olympic Council of Ireland. (Photo: TASSO MARCELO/AFP/Getty Images)

Speaking to The Irish Post, a spokesman for the OCI said, "The Olympic Council of Ireland (OCI) has no knowledge of the two individuals arrested. The OCI has launched an immediate investigation with our ATR [Authorised Ticket Reseller], Pro10, into how the individuals were allegedly in possession of OCI allocated tickets. The OCI strictly adheres to the IOC [International Olympic Committee] regulations around ticket allocation, sale and re-sale. We are treating this matter with the utmost seriousness."

According to this RTE report Rio has threatened to fine Official Olympic bodies up to 100 times the face value of the ticket if the resold ticket originates from the official committee.

On their "Ticketing FAQ" on their website, organisers warn buyers that, "reselling tickets for more than their face value is illegal, and that buying tickets from unauthorised sources runs the risk of the tickets being invalid or counterfeit."

The Embassy of Ireland in Brazil have said they are aware of the situation and are providing consular assistance.

At the time of writing, the Brazilian Ministry of Justice, THG, and Marcus Evans Ltd., and were all approached for comment.