FOR Hughie O’Donoghue one thousand years of history weighed like a heavy burden.

The artist had just won the job of designing and installing two giant stained glass windows in London’s Westminster Abbey and the enormity of the project threatened to cloud his creativity.

Respected within his trade, O’Donoghue had form working as a painter and with stained glass, enough to receive an invitation to submit a proposal for two new stained glass windows in the Abbey that would mark the 60th anniversary of the Queen’s Coronation in 2013.

He accepted of course, and for two years he thought and toiled.

On Tuesday he stood beneath his work beside the admiring eyes of President Higgins who requested a peek as part of his state visit.

“The biggest difficulty with the job was not getting overwhelmed,” said O’Donoghue. “All the things that go with a big commission can be distracting. I just had to be myself, do the best job I could and try not to worry too much.”

Faced with the challenge of creating something sympathetic and something that would endure posed many challenges for the Manchester Irishman, with roots in Mayo and Kerry, but his instinct was make something subtle that would complement the rich history of the Abbey.

“Because of the great height and the space in the Abbey, it had to be something simple, using the light and complementing the building,” he says. 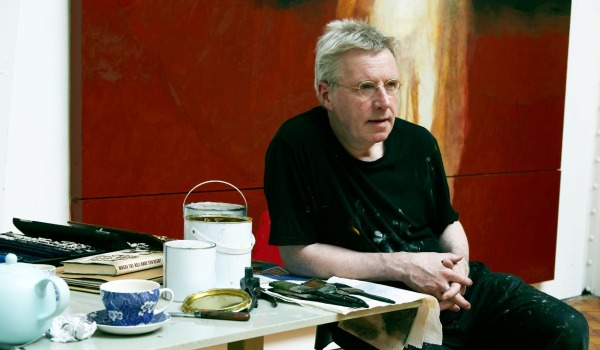 The difficulty with such a project is that in the absence of a canvas to practice on, much of the final creation had to be imagined.

O’Donoghue explains that there were lots of design changes along the way and there was also the concern that the glaziers would not be able to reproduce the signature style of his work.

“But they did,” says the artist. “You want to be known for what you do and the glaziers followed the models faithfully — when I saw the first samples, I instantly recognised it as my work.”

Yet unlike a painting, O’Donoghue’s windows will not be marked by even a subtle signature.

“You strive to make something that will endure,” he says. “And I have a strong sense that the windows will endure.”

The Chapel in the Abbey dates back to 1510 and was designed to be like a glass lantern. The original windows were made by a glazier Barnard Flower working in the time of Henry VII and his work has endured — a theme that focuses many artists.

O’Donoghue has created work on the subject of the Passion Series, which appears in the Irish Museum of Modern Art and has also designed a huge glass window which was installed in the Bon Secours hospital in Galway.

“President Higgins knew about my windows,” he says. “We met at an expo in Galway before he became president. It’s a great compliment that he has asked to see the windows.

“The first time I saw them finished was the darkest afternoon of the year and when I went into the Abbey they glowed. It will be a great delight to show the President.”