'There was blood everywhere': Irish people who witnessed the London attack share their stories

IRISH witnesses to Wednesday’s attack in London have told of chaotic scenes after Khalid Masood killed four people and injured dozens more before being shot dead by police.

Wexford woman Joanne Saunsbury (34) was working as a tour bus guide on Westminster Bridge when a car driven by the 52-year-old killer ploughed through pedestrians.

Joanne rushed to the aid of one man who was left in a “pool of blood” after being struck at around 2.37pm, managing to resuscitate him before emergency services arrived.

"One person there wasn’t moving. He was non-responsive and I was trying to get him to breathe and to get his heart beating, so I was doing CPR," she told Alan Corcoran on South East Radio's Morning Mix show.

"The person I was helping was severely wounded...It was just horrific, there was blood everywhere and there were people lying in pools of blood.

"I was doing CPR until the paramedics came. I learned CPR from my training with the Order of Malta in Wexford.”

Joanne told of the horrifying moment she realised a car was deliberately driving into pedestrians on the bridge.

"I came home to 41 messages from people wondering if I was OK. When people heard I was on Westminster Bridge I got so much support, the thing is I don’t feel like a hero."

Arthur Griffin, vice president of Fianna Fáil, was at a meeting at the Liberal Democrats HQ in London before he made the short walk over to the parliament buildings on Wednesday afternoon.

Just half a minute later Khalid Masood burst through that same entrance and stabbed police officer Keith Palmer, 48, to death. 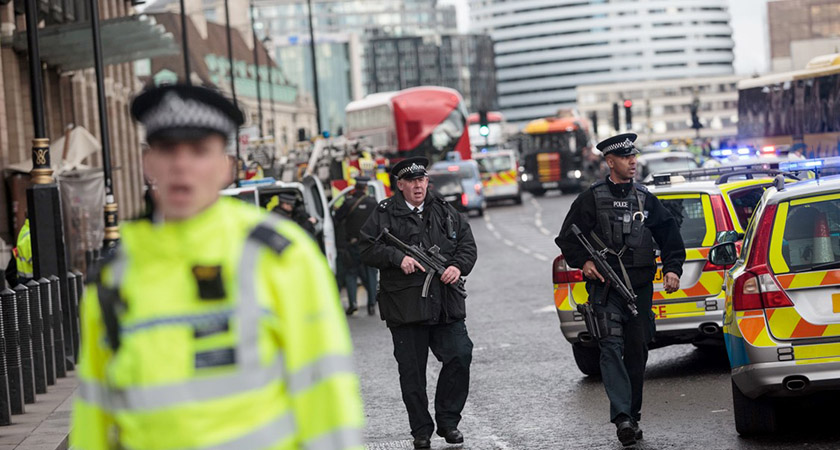 “I missed it by 30 seconds. I walked out through the gates where the attacker would have come in,” the Tipperary native told the Irish Independent.

"By the time I walked in and was up to the third floor it was on the television. It was one of those sliding doors moments."

"They put up a cordon around the square and put those buildings on lockdown. It was quite frenzied, honestly.”

Another Irishman, Tiernan, told Kay Burley on Sky News that he heard three loud bangs and witnessed the horrifying scenes. 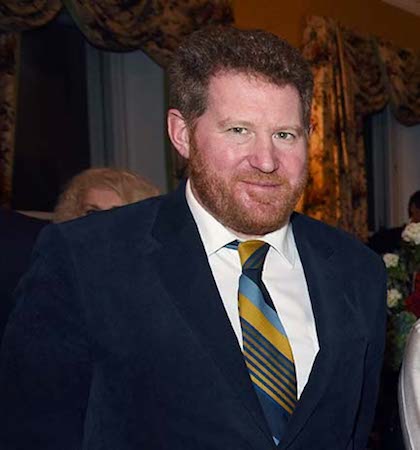 He said the emergency services were on the scene within five minutes and "it was constant after that".

"When I did get upstairs I finally saw what happened, the chaos that was on the bridge."

Tiernan said he uses Westminster Bridge twice a day and that the attack might make him rethink his routine in the short term.

"I'd be more vigilant in the next coming days and I will probably use Waterloo Bridge instead."

London Irish community member Michael Kingston, a maritime lawyer and director of the Irish Cultural Centre in Hammersmith, said "all hell broke loose" after the attack.

The Cork man told the city’s Red FM that he was supposed to have been on Parliament Bridge at the time but had been held up.

"I was at a meeting on the Foreign and Commonwealth office on King Charles St, parallel with Downing Street towards Westminster,” he said.

"I remember checking my phone at 2.37pm and I left there to head to the International Maritime Organisation which meant that I had to go down to Parliament Square and turn left across Parliament Bridge. 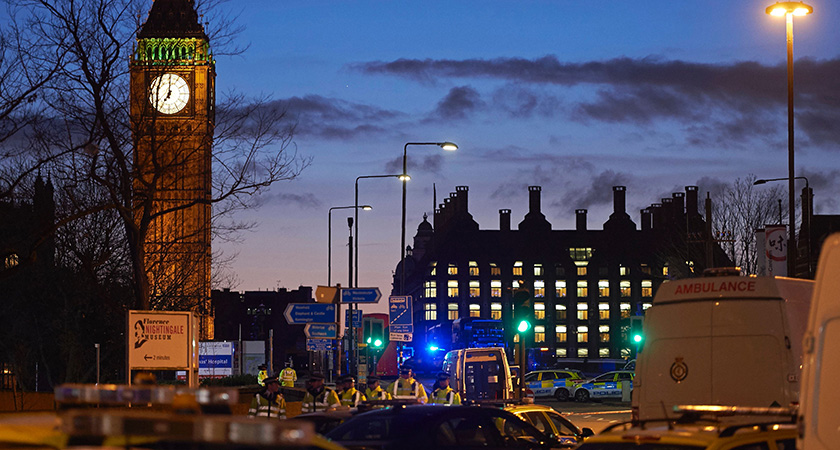 "I got to the lights and all hell broke loose.

"There were cars racing around the corner and there was a car mounted on the curb on the far side and people were running from it.

"I stayed on the north side railing of the bridge where Westminster Station is and next thing I heard shots and saw police scrambling.

"It was quite clear to me at that stage that it was a terrorist attack when I saw bodies on the ground that hadn't been in the vehicle and that the police were shouting he's down there."

"I could see in front of my eyes the police man shouting 'he's down there!', so I knew immediately that it was a terrorist attack, but the problem is that you don't know if there's going to be something else.

"So I just stood there for a second and said: 'Right, which way am I going to go?” 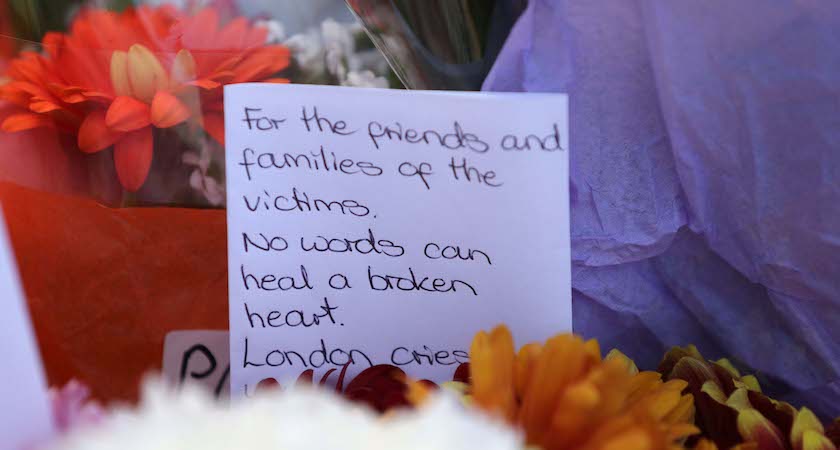 Messages of solidarity are seen on bunches of flowers layed as floral tributes to the victims (Picture: Daniel Leal-Olivas/AFP/Getty Images)

One Irish commuter, who arrived at Westminster Station shortly after the knifeman had been shot nearby, described a confused atmosphere in the area.

Kieran, 49, arrived at the station for a meeting in Whitehall just prior to 3pm.

“Originally I thought something had happened in the station as there was a bit of commotion in there,” he said.

“When I left the station there were sirens blaring everywhere, but that didn’t seem particularly out of place as far as London goes.

“It’s a bizarre feeling sipping a coffee in a meeting 400 yards away from a bridge where innocent people lie dead.” 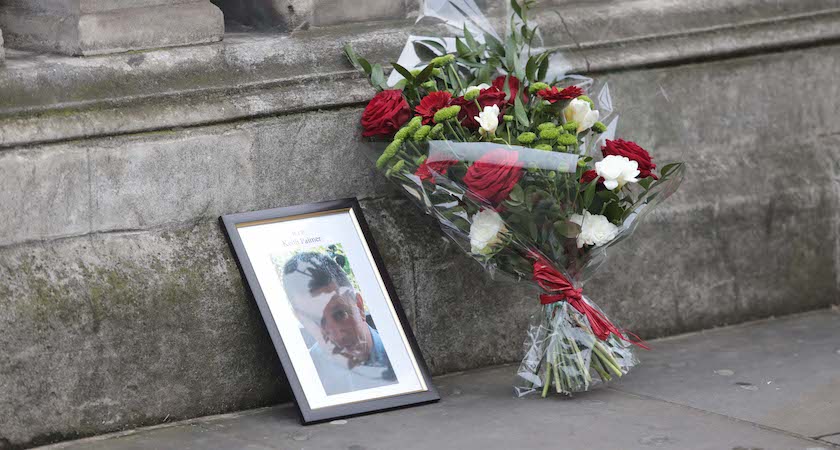 A floral tribute left by a member of the public sits beside a photo of PC Keith Palmer, the policeman who was stabbed to death as he guarded the Palace of Westminster (Picture: Jack Taylor/Getty Images)

Yesterday British Prime Minister Theresa May revealed that one Irish person was among the 50 injured after the attack, but she does not have life-threatening injuries.

Khalid Masood, the attacker who died at the scene, was named by Metropolitan Police yesterday.

He was born Adrian Russell Ajao in Kent on Christmas Day 1964.

Nine people are currently in custody after raids by police in connection to the attack in Birmingham, Manchester and London.