THIERRY HENRY has spoken out about how the backlash against his infamous handball against the Republic of Ireland in 2009 affected his family and mental health.

The legendary ex-Arsenal striker illegally handled the ball in the build up to France’s extra-time winner against the Republic in the play-offs for the 2010 World Cup a decade ago.

The ill-famed incident booked France their place in South Africa and robbed an honest Irish side of the shot at glory they deserved.

Henry’s handball has since gone down as one of the most sickening examples in football history of a refereeing blunder deciding the outcome of a game.

Recalling the incident and subsequent backlash, Henry said: “There's something, a reaction I had, that I didn't even think about.

“And my hand came out, I crossed the ball to Gallas, ball went in. We've been 'programmed' in brackets to play until the whistle blows.

“It was a bad, very bad reaction, reflex, however you want to call it. I didn't plan it”. 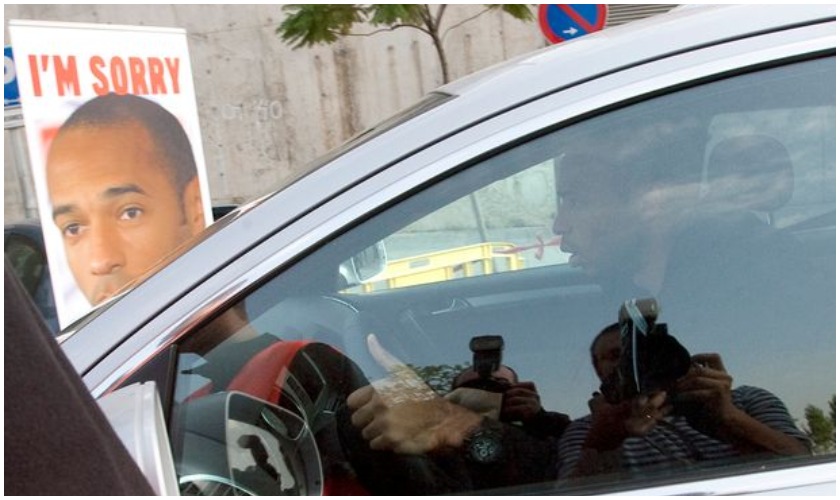 Henry arriving at training in 2009 next to a poster claiming he was sorry for cheating (Image: Getty)

Henry added that the incident marked the first time he had been viewed as “the bad guy” in his glistening career.

“So my family started to be hurt. That's when I'm vulnerable. For the first time I'm like, well this is out of my hands,” he said – using an equally unfortunate and unintentional pun which prompted laughter from his co-guests.

“Anyway, anyhow, no, but that was out of my hands and it's so hard when you can see that your people are hurt. There is nothing you can do about it, because I didn't plan that,” Henry explained.

“Nobody offered any support. You are alone in this type of moment. Nobody phones you, nobody says ‘how are you?’

Henry also called for footballing bodies such as FIFA and UEFA to adopt a “zero tolerance” policy on racism in the sport.

“I had my things also back in the days on the field. I remember playing away, taking the corners, and people were spitting on me.

“People that are there, the big guns, [must] come out and say ‘if that happens again, we stop the game’… people know who walks into those stadiums and do the thing that they're doing. People know.

“It's always us talking. What about the people that are, that are up there? The big guns... Running things. What are you saying about it? Not those 2,000 euro fines and what-not.

Spurs star Rose said: “Obviously a few of us had a difficult night in Montenegro a few weeks ago, and I've experienced before. It's not something I'm surprised by.

“And I spoke about the lack of black managers in English football at the minute. And got a mixed reaction which I was surprised about. I don't think the numbers can lie. And until somebody can give me a good enough reason, it's something that I'll stand behind, definitely.”

'A Royal Team Talk: Tackling Mental Health' will be shown on BBC One on Sunday May 19 at 10.30pm