The tweet – a take on the controversial Pepe the Frog meme – showed an adult frog in a Union Jack t-shirt holding the hand of a smaller, apparently disabled frog wearing the Irish Tricolour.

The image was captioned: “C’mon Paddy, EU can leave too”.

The Irish frog was depicted with his tongue sticking out, a pint of Guinness in hand and wearing a hat bearing the slogan: "Please be patient, I have famine".

A number of Irish Twitter users responded with fury, especially at the meme's reference to the Great Famine.

Others were angry at the Independent unionist councillor for appearing to take a swipe at autistic people, as the phrase mocking the Irish Famine was clearly an infantile twist on the adage 'Please be patient, I have autism'. 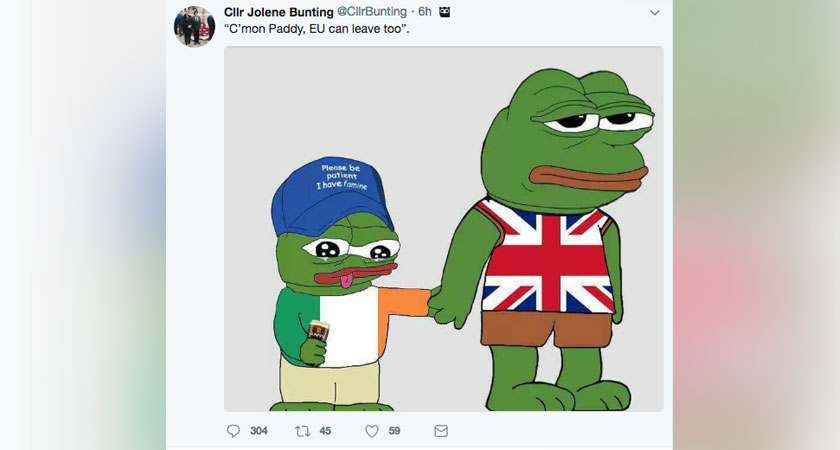 Responding to the controversy today, Bunting posted a video to her Facebook page in which she called the fallout "completely ridiculous".

She said: "I really didn't see how this could cause controversy.

"It was a reference to Ireland leaving the EU, nothing more. I shared the image for my group, I do it regularly.

"Now I will be honest, I wasn't able to read the hat without zooming in and regrettably the hat did make light of the Famine. That isn't something I would usually share, and if I had realised I wouldn't have shared it."

She added: "However, the response to this post has been completely ridiculous. The leftists are well and truly triggered, I have been accused of being sectarian, racist, even a terrorist.

"But what has really disgusted me has been the accusation that I would mock children with autism. To the people that have wrote that online, you are disgusting".

In a laughable attempt to further make amends, Bunting replaced the original meme with a "fixed" version - which replaced the famine slogan on the Irish frog's hat with an EU flag.

She continued: "A lot of these posts are coming from the usual suspects - Sinn Fein, the IRA and their supporters ... [who] took up the bomb and the gun in order to make a political gain.

"I have never harmed anyone and I never will harm anyone for my political aims. So take a good look at yourself before your criticise me.

"I hope that Ireland do take my advice and leave the EU to make that country better for everyone who lives in it."

Fellow Belfast City Councillor, Deirdre Hargey of Sinn Féin, revealed she has lodged formal complaints with Belfast City Council and the Local Government Commissioner for Standards (LGCS) over the tweet - which she branded “racist, sectarian and offensive”.

Alliance councillor Emmet McDonough-Brown also filed a complaint with the LGCS, branding the tweet “not only crass but racist and sectarian”.

He added: “There is no place in our politics for this. Depressingly, it seems there is no prejudice she [Jolene Bunting] is unwilling to support."

Bunting had previously been reported to the LGCS by SDLP representative Donal Lyons over an “anti-Islam” video she appeared in, which was filmed in front of the Belfast Islamic Centre.

In 2014, she was forced to apologise for sectarian comments she made about Catholics on Facebook.