UKIP leader Gerard Batten has deleted a tweet that claimed only 100 lorries a day cross the Irish border – and that half of them carry Guinness.

The MEP tweeted the bizarre stat yesterday in response to a discussion on James O’Brien’s LBC show about the backstop and the possibility of a hard border in the event of a no deal Brexit.

The tweet was quickly criticised by Irish journalist Richard Chambers, who branded it ‘astonishing bollocks’. 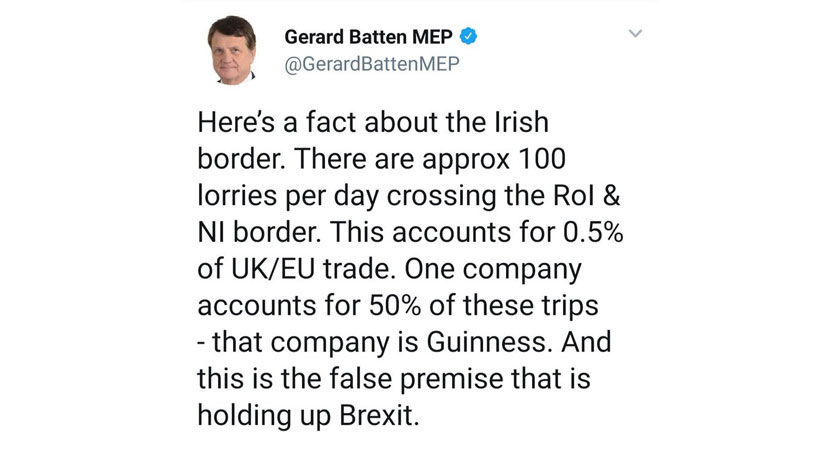 Batten has now tweeted to clarify his original statement, citing a former Swiss diplomat as his source.

He said that his tweet about the Irish border related to the main Dublin-Belfast Road.

Yesterday I tweeted about crossings on the Irish border. Let me clarify, the figure was for approx 100 heavy goods vehicles per day on the main Dublin-Belfast Rd. The figure for 0.5% of UK/EU trade remains. The source was Michael Ambuhl former Swiss chief negotiator with EU.

There are at least 208 crossing points on the border, compared to 137 along the EU’s entire eastern border.

In his original tweet, Batten wrote: “Here's a fact about the Irish border. There are approx 100 lorries per day crossing the ROI & NI border. This accounts for 0.5 per cent of the UK/EU trade. One company accounts for 50 per cent of these trips - that company is Guinness. And this is the false premise that is holding up Brexit.”

According to statistics organisation Statista, 177,000 trucks cross the border every month, as well as 208,000 vans and 1.85million cars.

Chambers was quick to pull up Batten on his original tweet, and he wasn’t the only one…

This, to be blunt, is astonishing bollocks.

208,000 vans cross the border for business every month.

so @GerardBattenMEP UKIP thinks there 100 lorries a day on the border. More unicorns!! Our grocery members have over 5 times that crossing the border every day with out mentioning fast food, fashion DIY etc and that is just one industry. @Freight_NI can you believe this? pic.twitter.com/qRGiOlTeT9

So apparently only 100 lorries cross @BorderIrish a day.....
Actually over 4.6 million lorries cross the border a year - approx 13k per day
You can see figures on P.9 of https://t.co/Xoyd6H33EA
Also worth noting only 14 road monitored
Since 2014 this traffic has increased by 21% pic.twitter.com/qWKU2fIubq

Are we done with all this nonsense now, Gerard? pic.twitter.com/rmUt92IomN

Batten today wrote to the Queen requesting her to suspend Parliament until after March 29 to thwart MPs, who he claims are trying to delay Brexit.

EU will stand 'fully behind Ireland' regardless of Brexit outcome, Barnier says on visit to Dublin