US Vice-President Mike Pence to visit Ireland in September

THE VICE President of the United States is expected to make a visit to Ireland, where his family have roots in two counties.

The Vice President’s ancestors immigrated to America from Sligo and Doonbeg in County Clare, where US President Donald Trump owns a golf course and hotel.

His grandfather arrived at Ellis Island from Tubbercurry in Sligo in the 1920’s in order to try and make a better life in the United States.

On April 11, 1923 an Irish immigrant named Richard Michael Cawley stepped onto Ellis Island and began our family’s story in America. Because he had the courage and faith in America that is displayed in all of you, that’s how Michael Richard Pence became Vice President of the US. pic.twitter.com/bIcCwAZJRB

Mike Pence is expected to fly into Dublin on September 6th, after trips to Iceland and the UK. He will  meet with Taoiseach Leo Varadkar before making his way south to Blarney in County Cork and Doonbeg in County Clare, where he will likely stay in Mr Trump’s hotel.

There are reports that Mr Pence may also speak with the President of Ireland, Michael D Higgins, while on his trip.

The American VP has made personal trips to Ireland with family several times before, but this will be his first visit as a state official. 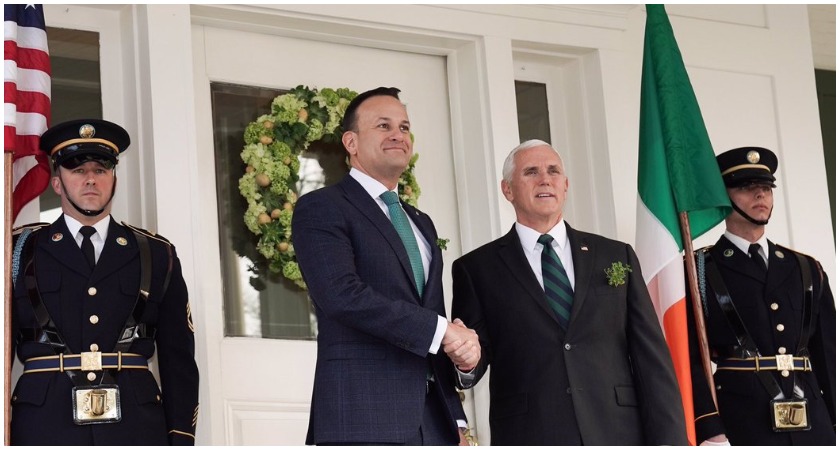 Taoiseach Leo Varadkar met Mr Pence in the US on St Patrick's Day.

US President Donald Trump made a visit to Ireland several months ago, drawing protests from activists, and there is the possibility of more controversy with Mr Pence’s visit due to his administration’s anti-immigration crackdown and controversial policies.

Taoiseach Leo Varadkar and his domestic partner Matthew Barrett met with the Vice President and his wife in Washington on St Patrick’s day, where Mr Varadkar, despite praising the “warm reception”, also delivered a heartfelt speech where he proudly said that as the leader of Ireland, he is “judged by my political actions and not by my sexual orientation or my skin tone or my gender or religious beliefs.”

He went on to say “I don’t believe my country is the only one in the world where this story is possible.”

Preparations are now underway for the Indiana native’s visit.

By: Charlie Wilkins  -  6 minutes ago