AN TAOISEACH Micheál Martin was accosted by a furious schoolteacher while in Skibbereen, Cork yesterday.

The Fianna Fáil leader was visiting the town which had been devastated by floods caused by Storm Ellen, when he was approached by the teacher, who will be based in Dublin from next week.

Earlier in the day, the Taoiseach visited a school in Nagle ahead of its reopening, where he was shown how the school would be able to adhere to social distancing.

Other schools, however, have a large number of students per classroom, and there are concerns about how social distancing will be carried out in these situations-- which is something the unnamed teacher brought up with the Taoiseach.

In a video posted to Twitter by Virgin Media News reporter Richard Chambers, the teacher told Mr Martin that "Parents are going to be sending kids into an unsafe situation" when schools reopen.

"There could be twenty, thirty kids in a classroom ... you must know that," she said.

"And I'm going into it, and parents are going to be sending kids into an unsafe situation." 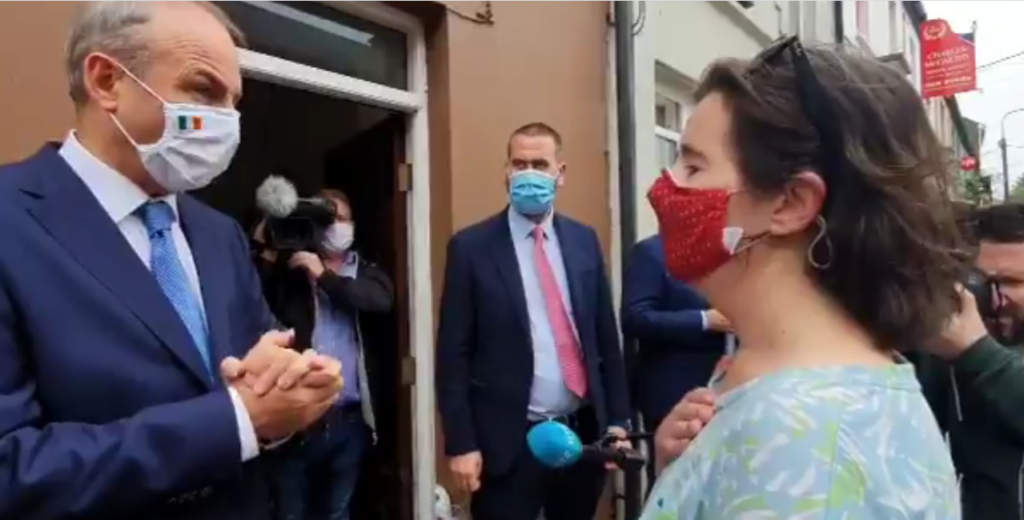 "Can I ask you, please, to [consider] a plan B, where all students are in, all teachers are in, but it is done safely," suggesting that "some of the students may not be in for the full time but they're in safely."

The Taoiseach responded to the woman by saying it is their "intention" to have a safe reopening.

"I've been to a school this morning to see how they're going to do it."

Breaking: Taoiseach reprimanded by Dublin schoolteacher over what she describes as "criminal" "unsafe" plans for school reopenings.@VirginMediaNews pic.twitter.com/aSJUJEW1wD

Earlier, at the visit to Nagle Secondary Community College, Mr Martin said he was "very impressed" by the school's new infrastructure to ensure a safe return.

"It's very interesting to see the computer rooms and the use of Perspex coming down out of the ceiling," he said. "Evidence of the can-do attitude of teachers and education staff across the board in just getting to grips with this.

"I am very conscious that as Taoiseach of this country we owe it to the children and the young people to enable them to have a proper quality learning experience and education experience."