Will Ireland be next to legalise prostitution?

THIS week in Dublin a delegation of Amnesty International decision-makers voted in favour of the decriminalisation of prostitution in Ireland and across the world.

The move means Amnesty’s International board now have the go ahead to develop and push forward a policy which they believe will “protect the human rights of sex workers”.

The controversial vote has triggered reaction from both sides of a polarised debate on prostitution in Ireland and further afield.

Amnesty’s position is this. Sex workers are one of the most marginalised groups in the world; therefore “the decriminalisation of sex work means that sex workers are no longer breaking the law...They are not forced to live outside the law and there is better scope for their human rights to be protected.”

Amnesty believe once sex workers are no longer seen and treated as ‘criminals’ they will have better protection from police.

In June this year, legislation making it a crime to pay for sex was introduced in Northern Ireland but at present, prostitution is still technically legal in both the UK and Ireland, although ‘related’ activities, such as soliciting for sex in a public place, kerb crawling, owning or managing a brothel and pimping are crimes.

Amnesty’s position states that it is not “opposed to legalisation per se, but we would want to make sure that any laws passed promote sex workers' human rights and comply with international human rights law”. 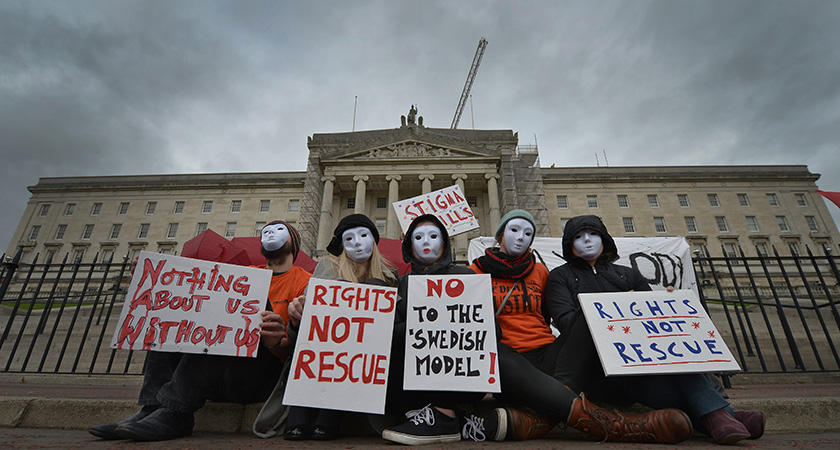 Sex workers at Stormont in Belfast, Northern Ireland before the vote on the Bill that made it a crime for anyone to pay for sex in Northern Ireland. (Photo by Charles McQuillan/Getty Images)

On the other side of the argument is Rachel Moran from the organisation SPACE (Survivors of Prostitution Abuse Calling for Enlightenment). Dubliner Moran worked as a prostitute for seven years in Dublin and other Irish cities, since the age of 15. At 22, she changed her life, and has been involved in the political push for the Nordic Model in Ireland.

The Nordic, or Swedish model is seen as a gender-equality solution – with laws that penalise the demand for commercial sex while decriminalising individuals in prostitution and providing support if they want to get out of the sex industry. It is based on an approach first adopted in Sweden in 1999, and followed by Norway and Iceland.

Moran says what Amnesty International are doing is “endorsing a human rights violation on a global level”.  She has labelled Amnesty's decision as “wrong footed" and "crazy”.

“The purchase of sex, the purchase sexual access to a person’s body is in itself a human rights violation…they [Amnesty International] are also rolling the dice very seriously with their own reputation”, said Moran.

The Irish Post also spoke to Turn Off The Red Light (TORL) an Irish campaign group trying to end prostitution and sex trafficking in Ireland. TORL stated that rather than reacting to the Amnesty vote, they are concentrating on getting new legislation through to change Ireland’s current laws.

TOFL and Minister for Justice and Equality, Frances Fitzgerald, believe the Criminal Law (Sexual Offences) Bill of 2014 will be pushed through by the end of the next government term.

Minister Fitzgerald stated: “I am aware of the ongoing debate surrounding prostitution and of the views of both sides of the debate. However, I strongly believe that this proposal is the best suited to address the trafficking and exploitation associated with prostitution. It sends a clear message that purchasing sexual services contributes to exploitation.”