Waiting for a baby. Close-up of young pregnant woman touching her abdomen while sitting on the couch

IRISH doctors and healthcare professionals have joined a global campaign calling for the decriminalisation of abortion.

A total of 838 individuals from 44 countries signed an open letter to governments worldwide that was published today by Amnesty International.

The letter calls on governments to stop interfering with health professionals’ ability to provide care.

It also warns that criminalising abortion puts women and girls’ health and lives at risk.

In Ireland, doctors and health care providers may face up to 14 years in jail if they provide, or assist in providing, an abortion other than when a woman or girl’s life is at risk.

Dr Peter Boylan, an obstetrician, gynaecologist and former Master and Clinical Director of Ireland’s National Maternity Hospital said that medical staff are forced to walk a legal and ethical tightrope.

He said: "Under the [current law] we must wait until women become sick enough before we can intervene. How close to death do you have to be? There is no answer to that.”

Globally, 40 per cent of women of childbearing age live in countries where abortion is banned, highly restricted or otherwise inaccessible.

Unsafe abortion accounts for 13 per cent of maternal deaths, resulting in 47,000 women and girls dying each year.

“The criminalisation of abortion prevents healthcare providers from delivering timely, medically indicated care in accordance with their patients' wishes,” the letter says.

“It impedes and disregards sound medical judgment and can undermine the professional duty of care and confidentiality that doctors bear towards their patients.”

Sara MacNeice, Manager of Amnesty International’s My Body My Rights campaign said: "So many respected health professionals speaking out reaffirms what women have been saying for years; governments can no longer claim that criminalising abortion has no impact on the health care that women and girls receive. 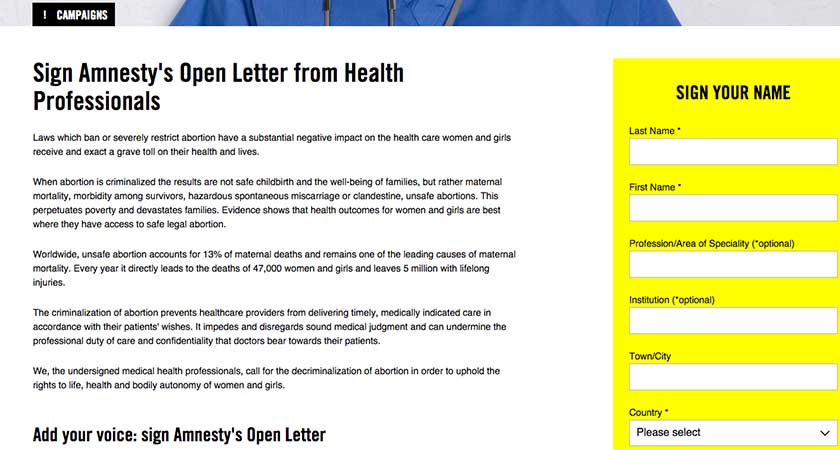 "Making criminals of women for abortion violates their human rights and can endanger their lives. In numerous countries around the world, Amnesty International has documented shocking cases of women forced to continue unviable pregnancies because of restrictive laws. We have seen women and girls pregnant as a result of rape forced to carry the foetus to term and give birth.

In a June 2015 report by Amnesty International, it stated that 177,000 women and girls had travelled from Ireland to England and Wales for an abortion since 1971.

In 2013, at least 3,679 women and girls travelled from Ireland to other countries for an abortion.

It also reported the stories of women who had endured traumatic experiences as they waited to get the health care they needed in Ireland.

One woman, named Róisín, was forced to carry a dead foetus for weeks because doctors wanted to be absolutely sure there was no foetal heartbeat.

“I wouldn’t be inclined to trust services for women in this country at the moment,” she told Amnesty International.

Amnesty International’s global My Body My Rights campaign aims to stop the control and criminalisation of sexuality and reproduction by governments.

It has highlighted the situation in Ireland, El Salvador, and Chile, as three countries where the law prevents doctors from being able to provide women with the required healthcare.