A TREASURE TROVE of Yeats family items, including hundreds of passionate letters from Irish poet William Butler to his first love, are to go under the hammer in London next month.

The ‘Yeats Family Collection’ will go on public display for the first time in Dublin and London in September, before being sold in a Sotheby’s auction in the West End.

Sotheby’s say hundreds of items, from “one of Ireland’s most important families of the last century” are expected to fetch up to €2million – and possibly more.

Some items were acquired by the State but the vast majority of the collection is to be auctioned.

The highlight of the sale is a set of 133 letters between W.B. Yeats and his first of many lovers, English writer Olivia Shakespear, which alone has a top estimate of almost €400,000.

It is being described as “of the highest importance to literary history.”

Also on offer is the writing desk used by the legendary Irishman, who won the Nobel Prize for Literature in 1923. 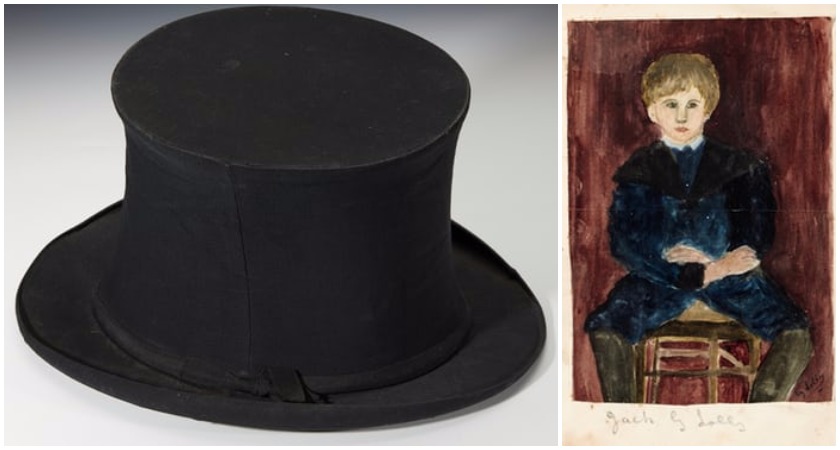 Jack B Yeats’s silk top hat and a sketch by his father John B Yeats of William Butler (Picture: Sotheby's)

Artworks by his brother Jack include three sketching diaries from 1888 and 1899, when he was a teenager during his second year in London.

Dozens of paintings and sketches by their father John – some which have been on loan to the National Gallery of Ireland – are also to be sold.

Sotheby’s say the unique sale is likely to be the last of such a large and intimate Yeats collection.

Charlie Minter, Head of Irish Art at Sotheby's, said: "This is an intimate, personal collection of many never-before-seen works that shed light on the fabled Yeats family, their influence and personal connections.

“All the family are represented in this sale. There is a particularly impressive group of works by John, too often the forgotten father of the Yeats family.

“His work appears rarely at auction; this is our chance to revaluate his pictures and appreciate the great intimacy of his sketches."

The auction follows the death in 2007 of the poet’s son Michael, an Irish senator and MEP, and the recent sale of the family home Cliff House in Dalkey, Co. Dublin after the death of his widow, the musician Grainne Ni Eigeartaigh.

A spokesman for the Yeats family said: "Our family has enjoyed these items for many years.

“We are delighted that they will now be exhibited and available for everyone to see in Dublin and in London and for collectors to have the opportunity to acquire their own piece of Irish history."

Sotheby’s will bring some of the key Yeats items back to Ireland for three days of public viewing at the Royal Hibernian Academy, Ely Place in Dublin (September 14-16) before they are returned to London for the auction on September 27.