ROBERT EMMETTS retained their status as champions of London hurling with a four-point victory over St Gabriels in Greenford on Sunday.

In what was a repeat of last year’s final, the result was the same, but it might have been different for Gabriels had they not given away a series of soft fouls after the break as Eoin Chawke punished their mistakes with five second-half frees.

Both teams finished the game with 14 men as referee Eadhmon MacSuibhne sent off Emmetts forward Bill Walsh after 22 minutes, before evening up the contest by dismissing Fiachra Connellan of St Gabriels five minutes into the second-half.

Both offenses were off-the-ball incidents which were brought to the referee’s attention by his assistants. 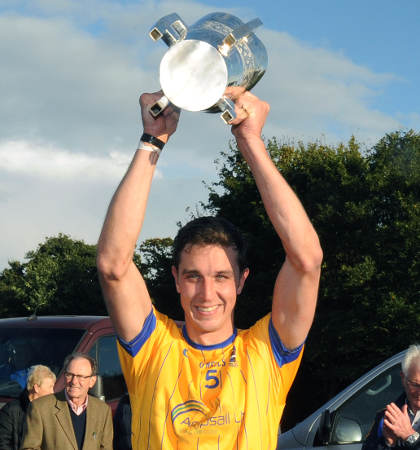 Captain Tagdh Healy lifts the cup [Picture: Mal McNally]
It had little bearing on the game though, as Gabriels were second best throughout a match in which they only held the lead once for a total of three minutes, either side of the first red card.

Emmetts started with eight of the 15 who began last year’s final, compared to just six for St Gabriels, who had beaten their opponents by 11 points when they met in round one of the Championship, though the teams-sheets differed greatly in the final.

After two wides apiece early doors, Emmetts midfielder Denis O’Regan got the scoreboard up and running with a sweetly struck effort from play, before Michael Ivors hand-passed to Neil Rogers, who sailed over an equaliser from distance.

Emmetts had put six goals past Sean Treacys in the semi-finals, and they were at it again on eight minutes as Daryl Roberts collected Padge Buckley’s huge puck, turned and rifled a ruthless shot past the despairing James Barrett in the Gabriels goal.

A pair of frees from Ivors steadied the Gabriels ship, but Tomas Lawrence soon put the wind back in Emmetts’ sails, taking advantage of being offered acres of space to slot over.

Back came Gabriels though and in between an Ivors ’65 and a Connellan point, Derek Morkan missed a golden opportunity to give the men in maroon a major, failing to catch the sliotar with any sort of conviction when bearing down on goal.

However, Morkan’s point did give them the lead for the first and only time in the match, and they were given another boost when Emmetts forward Walsh was given his marching orders moments later.

The referee’s eyes were fixed on play, but an incident involving Gabriels full-back Fergus Fahy and Walsh was spotted by an umpire, resulting in the latter being shown a red card.

Emmetts came up with the perfect response, though, as Chawke pulled on a loose ball from Richie Murphy’s pass, angling it just right to beat Barrett in the Gabriels goal.

Chawke and Ivors – who were both in fantastic form from dead balls – then traded frees, with Ivors having the last say in the half, sailing over his fifth point to make the half-time score 2-3 to 0-8 in favour of the Emmetts. 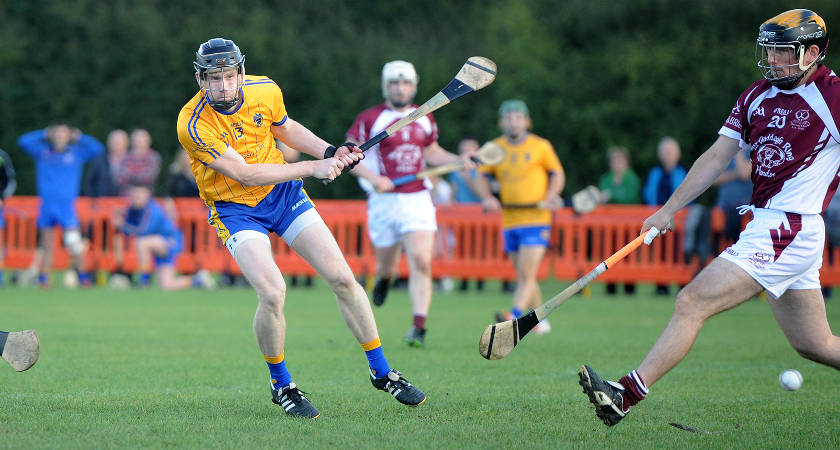 Eoin Chawke scores Emmetts' second goal [Picture: Malcolm McNally]
Roberts took advantage of having too much room moments into the re-start, extending Emmetts’ lead to two points, and the defending champions were then given a gift as Gabriels themselves were reduced to 14 men.

In very similar circumstances to the first red card, referee Eadhmon MacSuibhne was again oblivious to an off-the-ball incident, but his assistants were on hand to relay a spot of mischief from Connellan, and he too walked having been caught out by the officials.

The first of many soft frees conceded by Gabriels occurred moments later, followed by a second, with Chawke punishing them on both counts by popping over simple frees.

Kieran Morrissey made it three without reply for Emmetts, who were starting to take full control of the game, though Morkan pulled a much-needed point back for Gabriels.

At 2-7 to 0-10 down, Gabriels looked as though they needed a goal if they were to turn things around, and they nearly got it through substitute Eamonn Kenny, who flashed a powerful effort just wide of goal, causing the entire Gabriels bench to sink their faces into their hands in anguish.

Chawke (two) and Morkan then traded frees, before opposite number nines Sean Gilchrist (St Gabriels) and O’Regan (Emmetts) scored a point each from play, making it 2-10 to 0-12.

Still Gabriels desperately needed a goal and, after Cathal Kehoe extended Emmetts’ lead to five, they finally gave themselves a lifeline as Ian Makessey fizzed a shot past Buckley to make it a two-point game with seconds to spare.

However, instead of going for the jugular, they conceded one more soft free – dispatched by Chawke – while Morrissey added an insurance point in the last act of the game, handing Emmetts a four-point winning margin.

A Croke Park official will inspect Greenford this week to determine if Tir Chonaill Park is fit to stage the game, otherwise it will be played in Ireland.

Stephen Griffey. As good as Emmetts were in attack, the performance of their full-back nullified any goal threat Gabriels carried up until it was too little too late. Griffey mopped up on countless occasions when Gabriels dropped deep balls into the square.

LONDON HURLING TEAM OF THE YEAR 2016 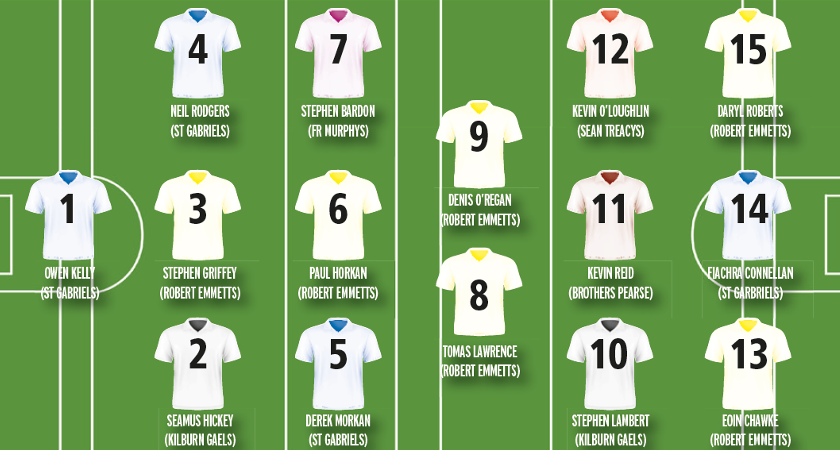