AS the centennial anniversary of the Easter Rising approaches, Ireland's historic attempt to claim independence from British rule is at the forefront of our minds.

But on the watch of FAI chief executive John Delaney, the political event is associated with football, much to the bewilderment of the nation.

Speaking to FAI media partners at the launch of the organisation’s strategic five-year plan last week, Delaney told RTÉ: “I think that it’s great that has been 100 years since 1916, that we’ll hopefully have new sporting heroes 100 years later in France and hopefully the Irish team can do the country proud.”

Who else, but Delaney, could champion the sacking of the GPO alongside the goal scoring of Jonathan Walters?
The revolutionary actions that would ultimately lead to the formation of an Irish Republic form the beginning of a story belonging to world history. Fifteen men were executed for their part in the Rising, demonstrating that their cause was a matter of life and death.

To dress football up as much more important than that (as former Liverpool manager Bill Shankly famously did) is to fall foul of hype. Even if football manages to capture the Irish nation’s imagination in the summer, it’s unlikely to be written about in another ten years, let alone 100. 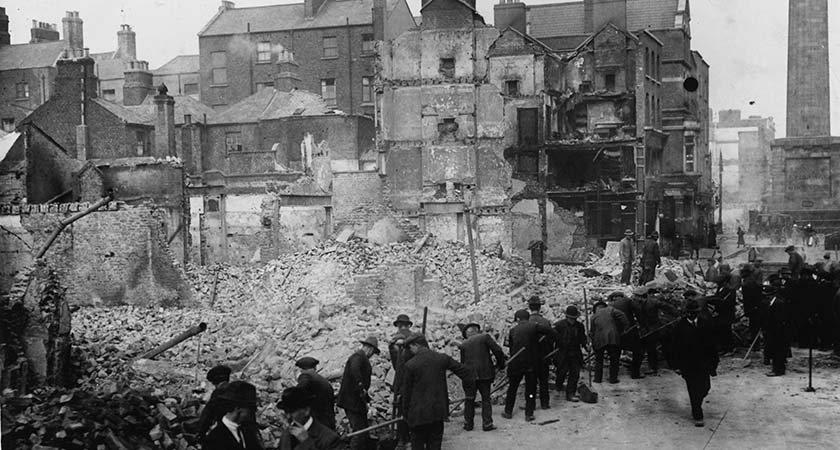 Textbooks won’t carry the image of Robbie Keane spraying champagne in a locker-room in France and a remake of the 2016 campaign is unlikely to see Cillian Murphy play the part of manager Martin O’Neill.

Eleven men in green jerseys have had historic victories. The unforgettable goals of Ray Houghton at Giants Stadium, New York and Shane Long in the Aviva Stadium last year made the pair instant heroes, but the men of 1916 are immortalised.

To return to the Walters example, 100 years ago his English birthplace – Birkenhead – would have made him less than an ideal candidate for the cause Patrick Pearse fought for. If O’Neill’s charges share any similarities with the men of 1916 it is that they know their chances of success are slim.

And like past major tournaments with glorious failure (think 2002 World Cup penalty shootout defeat to Spain) rebellions prior to the Rising also met a disappointing end: The United Irishmen in 1798.

Anglo-Irish relations have unquestionably softened since 1916, but the fact that Queen Elizabeth II’s state visit to Dublin in 2011 called into action the Republic’s largest ever security operation, suggests a clear tension based on historical precedent.

Where football is concerned, the 1995 Lansdowne Road game between Ireland and England stands alone as the low point in an unhealthy rivalry between the pair. Abandoned after rioting by hooligans in the upper west stand, it took 18 years before another international friendly match was played by the two neighbours.

Delaney’s comments are not a direct reflection on how he views Irish and British football but he is wrong to suggest that the sport has any connection whatsoever to 1916.

Had he been commenting about the GAA, Delaney’s Rising reference could be considered better judged. Michael Cusack’s 1884 organisation was born from a cultural antipathy toward playing foreign and in particular British sport, with football regarded as an unconscionable code for GAA men.

Gaelic games are still the only approved sports for many patriotic to the Tricolour. Sporting heroes who win All-Ireland senior medals at Croke Park can rightly claim that their achievement belongs to a larger cultural movement that helped Ireland’s right to self-determination. Although undoubtedly popular, football has yet to become part of Ireland’s national identity in the same way that GAA or the commemoration of the Rising continues to be. 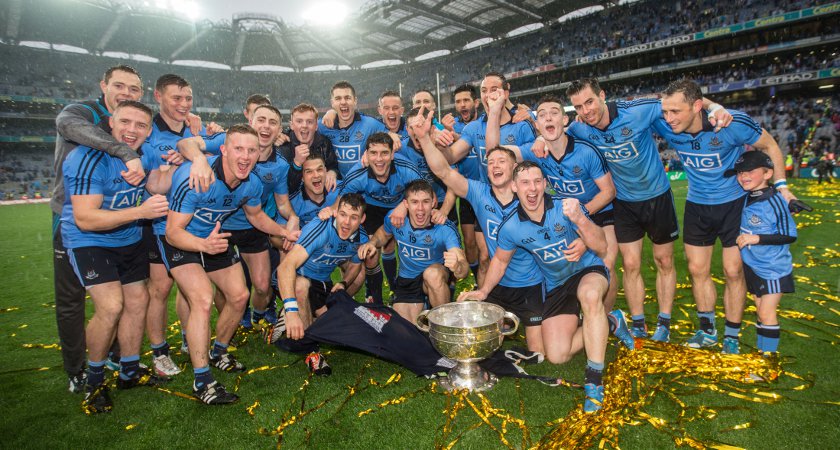 Dublin players celebrate with the Sam Maguire in 2015 [Picture: Inpho]
The subject of nationalism has witnessed Delaney embarrassed before. When footage of his rendition of the pro-IRA song ‘Joe McDonnell’ made headlines in 2014, he would later deny the offence only to apologise thereafter.

Reported to earn an annual wage of €400,000 (£294,000), his salary seems staggering when compared to the famously low income of Patrick Pearse. But then Pearse’s oratory (not his money), has long been celebrated as his major contribution to history, with the final line of his speech at O’Donovan Rossa’s graveside still, it seems, playing to the nationalist gallery: “an Ireland unfree shall never be at peace.”

By Delaney’s reckoning, hoping to have new sporting heroes in France equates to the same thing.

Any discussion about heroes should also include Irish supporters travelling to France. They have already been tipped by German magazine 11Freunde to provide the European Championships with an antidote to the Paris attacks.

Shortly after Ireland secured qualification to the tournament by way of a playoff victory over Bosnia, German author Alex Raack wrote: "The qualification of the Irish is a godsend. The Boys in Green can celebrate like no other nation, always peaceful, always sympathetic and emphatic, with an infectious, childlike joy."

As ticket allocations are finally settled, ferries and planes booked, all that remains is a countdown to Ireland’s opening game against Sweden. With the stage set for a star-studded show only a villain could spoil things now.

VIDEO: Drone footage captures one of the best 1916 commemorations you’re likely to see