LIVERPOOL, ENGLAND - JANUARY 13: Granit Xhaka of Arsenal walks off the pitch after being awarded a red card during the Carabao Cup Semi Final First Leg match between Liverpool and Arsenal at Anfield on January 13, 2022 in Liverpool, England. (Photo by Chloe Knott - Danehouse/Getty Images)

FORMER REPUBLIC of Ireland international Andy Townsend had laid into Arsenal midfielder Granit Xhaka for his red card challenge in the 0-0 draw with Liverpool on Thursday night.

The Swiss international sent a high boot into the chest of Diogo Jota in the 25th minute. He will now miss games against Liverpool and Tottenham.

This isn't the first time that Xhaka has been dismissed for a wild challenge. Early this year Xhaka let Arsenal down against Manchester City as he was shown a red card for a high challenge on Joao Cancelo as the Gunners ended up losing 5-0 at the Etihad.

Tonight was his fifth fifth in all competitions,  Since the midfielder's debut for Arsenal in 2016/17, no Premier League player has been sent off more times.

However Arsenal did manage to hold Liverpool to a 0-0 draw in the first leg of their Carabao Cup semi-final first leg at Anfield.

An extra layer of difficulty added to an already tricky task for #AFC...

“Xhaka always panics because he hasn’t got the legs, he said

“Let Jota take the ball! If he scores, he scores. Take it on the chin.

“But do not throw a leg into the player’s chest and ask the question!”

He added: “Fundamentally, he gets exposed when he is in that deep-lying position.

“He will always lunge and commit. Stay on your feet. Jota is on the edge of the box.

“There was someone there who would have dealt with it. Anything can happen.

When asked about the challenge, his manager Arteta dodged the question

"I have not seen it back," Arteta said. "They checked it, so probably a red card."

Arsenal host North London Derby rivals Spurs on Sunday and will then welcome Liverpool to the Emirates for the second leg on Thursday. Xhaxa will miss both. 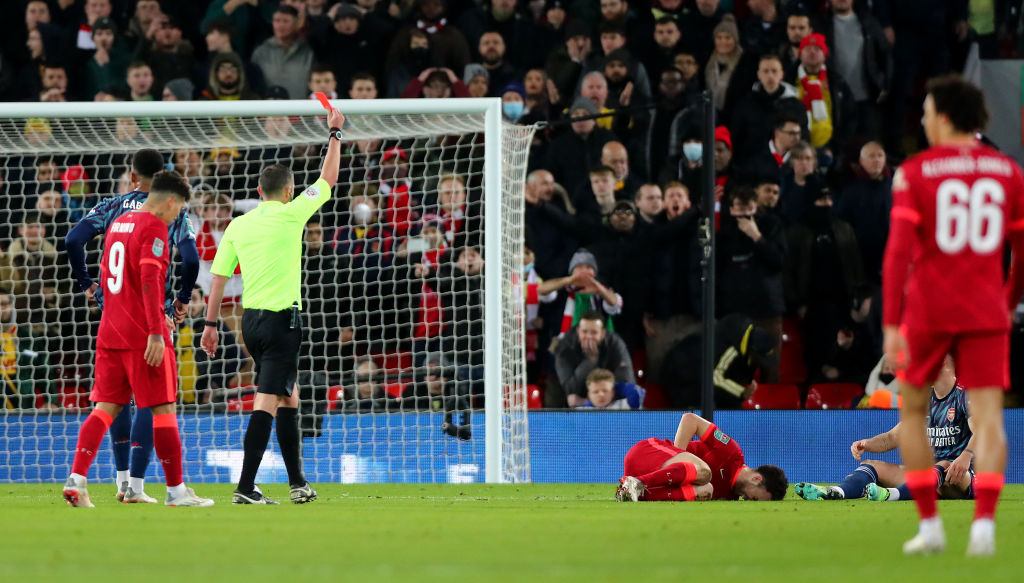