Cillian O’Connor's talent means Mayo are not lacking a marquee

IT IS somehow fitting that one of the most simplistic received wisdoms in football is linked to one of the game’s most inelegant phrases: that Mayo will not win the All-Ireland without a “marquee forward”.

We remain somewhat baffled on both fronts. What are the characteristics of this type of forward, that qualify them to bear favourable comparison with a very large tent? Why, for example, is Cillian O’Connor not counted among their number?

That’s Cillian O’Connor, twice the young footballer of the year in his three seasons at this level, who marked his Mayo debut with 1-6 and who has carried on in the same vein since, racking up 7-76 in 13 championship games. Cillian O’Connor, who averaged three points more per game than Bernard Brogan last summer.

Aside from injuries, this must surely be the most significant setback O’Connor has faced, his inability to match the likes of Brogan in the cliché stakes.

We’re not sure exactly what type of outdoor canvas-and-pole structure of a forward O’Connor is. More than a wigwam forward, one assumes, and surely greater than a four-man-tent forward, but alas, it seems, not quite a circus-big-top forward, like Michael Murphy.

He has not scored a goal in an All-Ireland final, like Brogan has, we must admit.

But the confusion persists, because Andy Moran was coolness itself in rolling the ball past Stephen Cluxton last September.

And yet, while his array of brilliant performances in the green-and-red, particularly prior to his 2012 injury, must of course make him more than, say, a tepee forward, he is not deemed worthy of the magical m-word either.

We’re being a little churlish, of course, but it is strange, how this idea that Mayo are a forward short of what it takes, gained such currency in the moments after last year’s All-Ireland final having scarcely been heard in the build-up to the game, after Mayo had so completely obliterated Donegal and also overpowered Tyrone, scoring for fun in both games.

Another funny aspect of this whole argument is talk of Mayo “unearthing” a “marquee” man this spring, as if forwards of the calibre or Murphy, or Brogan, or Colm Cooper, or O’Connor, or Moran can be found hiding their talents away somewhere where they are difficult to spot, such as the Mayo intermediate championship.

Any road, O’Connor has been out of action and Moran somewhat out of form as a Mayo team not that long back from their team holiday have lost difficult fixtures in Newbridge and Omagh, and the glut of missed goal chances in both games had only inflated this talk of the lack of a you-know-what up front.

The more patient and knowledgeable Mayo supporters — which is the majority of them, in our experience — will not over-react to their heroes’ recent failures and remember that things were even worse in the early stages of last year’s league and that the season didn’t turn out that badly, in either league or championship.

Look, of course Mayo could do with another superb forward and of course having one would improve their All-Ireland chances. But there is scarcely a team in Ireland to which those statements do not apply.

And there are many reasons why any side might lose a game against the best team in Ireland on the last Sunday in September.

The most obvious example is that forwards, no matter what mode of outdoor shelter they are classed as, had little to do with the stupid two goals Mayo conceded in the 2012 final and the senseless three-pointer that Robbie Hennelly’s mistake gifted to Brogan five months ago. 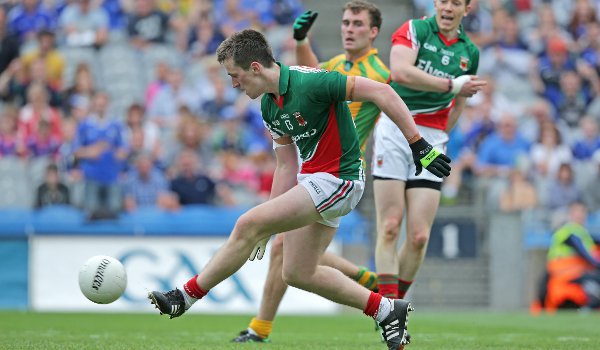 Cillian O'Connor in action for Mayo

Whatever about not winning an All-Ireland without a forward for the ages, Mayo are highly unlikely to win one if they keep conceding killer goals in the biggest game of all.

We should keep a close eye on Mayo between now and championship, but we should be broadening our view beyond just their inside forwards.

We should watch to see whether Ger Cafferkey emerges from his poor early-season form. Whether Alan Dillon can return to defy age and injury, and whether Adam Gallagher has what it takes to become a similar type of half-forward influence in the future.

Whether we should read much into Alan Freeman being banished to the periphery for these first two games. Whether a highly promising Mayo U21 team delivers and whether Evan Regan shows us more of his potential there.

There are tens of little things we should be watching. Because those waiting for a superstar to magically appear on the edge of the square for Mayo will be waiting a long time. Our guess is that the green-and-red full-forward line for championship will read something like O’Connor, Freeman and Moran.

And for all the wailing to the contrary, there are very few teams in Ireland that can boast a superior trio.

Why it's different this time for Mayo