“I get knocked down, but I get up again, you’re never going to keep me down.”

IF ANY London player embodies the sentiment of the Chumbawumba song the team belted out in the dressing room following their qualification for the Connacht final, it is Damien Dunleavy.

He has certainly taken the circuitous, bumpy route to this Connacht final.

His Galway career was shredded by injuries, but now the Neasden Gaels man is finally getting a chance to deliver on his huge potential.

I remember standing on the line out in Mill Hill for an early-season game last year. St Kiernans were playing Neasden Gaels. To be honest, I can’t recall what the competition was — it could have been the League or Conway Cup. That’s not important.

What is important, and what is still clear in the mind, is Dunleavy’s performance that day for Neasden. I mean no disrespect to the other 29 players on the pitch — most of whom are, at least, very good footballers — but Dunleavy stood out.

It was a little like an under-10 game; the best player on the pitch popping up in every position, not always passing when he runs into a wall, just bouncing off it on his way to kicking another point from an outrageous angle.

Long before he’d reached his total of 0-6 for the day, I had asked somebody there what his story was.

When a player this good, especially a forward, touches down in London, there is usually a story. Sure, the employment outlook is bleak in Ireland but the most talented footballers are invariably coerced into staying. Dunleavy, I believe, is in that top percentile.

So what happened? Well, like a lot of top performers who never quite made it to the top, injury was central to the tale. In the Kilkerrin-Clonberne man’s case, it was not just a bad break; more a series of crushing setbacks.

Now, standing outside the clubhouse at Ruislip in the July sun, I ask the former Tribe player for a summary of his injury problems to date.

“Have you got a good notebook there?” he says. Seven operations in five years, including four on the knees alone, didn’t just curtail his progress after winning an U21 All-Ireland medal in 2005 alongside Michael Meehan — they slowed his march to a crawl.

One of the knee injuries was a cruciate, the others were cartilage. “I don’t think there’s a lot left in one of the knees,” he says.

“Yeah, I had a hard old time of it but now, thankfully, in the last couple of years they all seem to have held up.

“It would definitely be my longest spell now [without injury]. Back when I was playing with Galway I never had a continuous spell of football, it was always two months on, three months off and I was out for 20 months with the cruciate.”

His injury-free run in London now is “great, absolutely great”.

He continues: “Paul [Coggins] and his team have been really understanding with me from the point of view that they know I can’t do every training session. I’d benefit more from a night’s rest than a night of extra training.

"They’re very understanding and only for that, to be honest, I wouldn’t be here.”

His presence is greatly appreciated by the team and supporters alike. In the Leitrim replay, Dunleavy’s performance had echoes of his tour de force against St Kiernans. The cliché about covering every blade of grass was certainly apt.

In possession, Dunleavy is mercurial, difficult to tackle. Backs — or indeed opposition midfielders or half-forwards who come into contact with him given his roving nature — are often faced with a choice of whether to stand off, jump in or foul.

Stand off and he’ll pick a clever pass — or score. Jump in and you’re unlikely to get close to the ball. Foul is often the option selected. 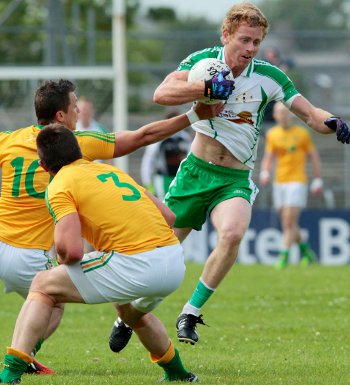 For somebody who has been injured so often, he is able to contort himself out of tackles in an array of improbable angles. Dunleavy is that rare combination of big, strong and tricky. In short: the kind of guy you want on your team.

And being part of this team is enriching his life in London, which he greatly enjoys anyway. The differences between playing for the Exiles and the Tribesmen are telling.

“There’s a lot more pressure at home,” he says. “Everybody at home seems to follow football but here there is less pressure on you.

Sometimes that’s a good thing because it brings people out of their shell. They perform better. At home it tends to be a bubble and when you’re caught in that bubble… it’s a pressure cooker situation. Whereas here everyone is allowed to express themselves.”

The absence of pressure will certainly continue to the Connacht final. London are 33/1 outsiders. Mayo meanwhile are redefining the term “unbackable” at 1/500. What does Dunleavy think of those odds?

“I think it’s great. All the pressure is on them. We have zero pressure going into the game. Bookies rarely get it wrong but when they do it’s a great feeling when you’re on the underdog.

“We’ll be going in and we won’t be looking at odds or anything like that. We’ll be giving it our best shot, concentrating on our own performance.”

And is there genuine optimism among the team?

“There is of course,” he says. “The first game against Sligo we didn’t really know where we stood as we hadn’t played any challenge games. Genuinely, that game brought us on a heck of a lot. Obviously Mayo are going to be another couple of steps up the ladder.”

Getting that chance to face Mayo in the Connacht final for the third time — the first with London — is an achievement Dunleavy feels proud to be a part of. On a personal level it “ranks right up there, because we’re massive underdogs in this year’s championship”.

Without missing a beat, he adds: “But we’re not finished yet.”