Michael Conlan suffered a cut in the second round of his bout with Leigh Wood (PICS: Chris Egan)

MICHAEL CONLAN is without doubt an extremely confident man.

The self-assured featherweight boxer from Belfast went into his last bout against Nottingham's Leigh Wood undefeated with 16 wins under his belt.

As an amateur his achievements include reaching number one in the AIBA Bantamweight rankings, gaining a bronze medal at the 2012 Olympics and Gold at the 2015 world Championships.

In short, Conlan has been one of Ireland’s most successful amateur boxers of all time, earning him every right to be as confident in his availably as he is in the goals, he sets himself.

Walking out into the Motorpoint Arena in Nottingham to face the current WBA Featherweight Champion Leigh Wood, Conlan was seen to be relishing in the atmosphere of the big occasion, the cheers for his opponent silenced by the Conlan faithful singing to Grace, the song written by Frank and Sean O'Meara in 1985 and made popular across the world by The Dubliner's Jimm McCann.

As he made his way into the centre of the ring, Conlan turned to his fans and raised his arm in a gesture that screamed ‘we got this’ - the volume of the audience was on maximum, you would be confused to think you were in Conlan's hometown and not in the back yard of his opponent. 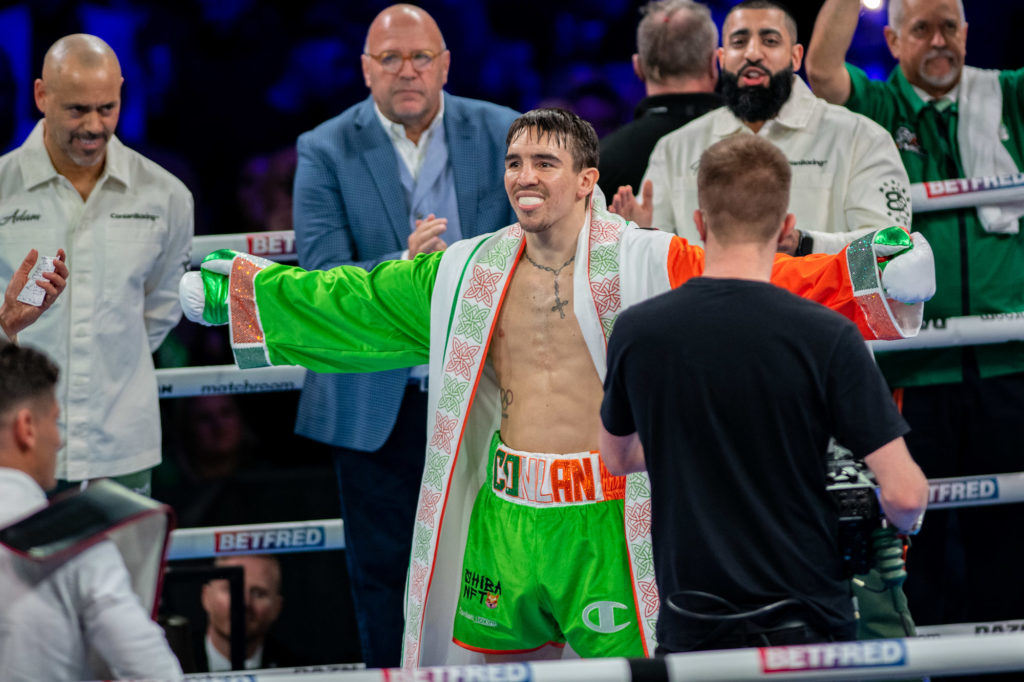 From the echo of the first bell, Conlan put Wood under immediate pressure.

Just moments before the end of the first round Wood is caught with a punch that would see him knocked backwards and then receive a count.

Standing on what seemed to be unsteady legs, Wood made his way to his corner saved as they say, by the bell.

In the rounds that followed, Conlan remained in charge, only looking under pressure when Wood pushes him back onto the ropes in a move that limited Conlan's options.

Throughout the 8th and 9th rounds there were some relentless exchanges of blows with both fighters trading in the centre of the ring. 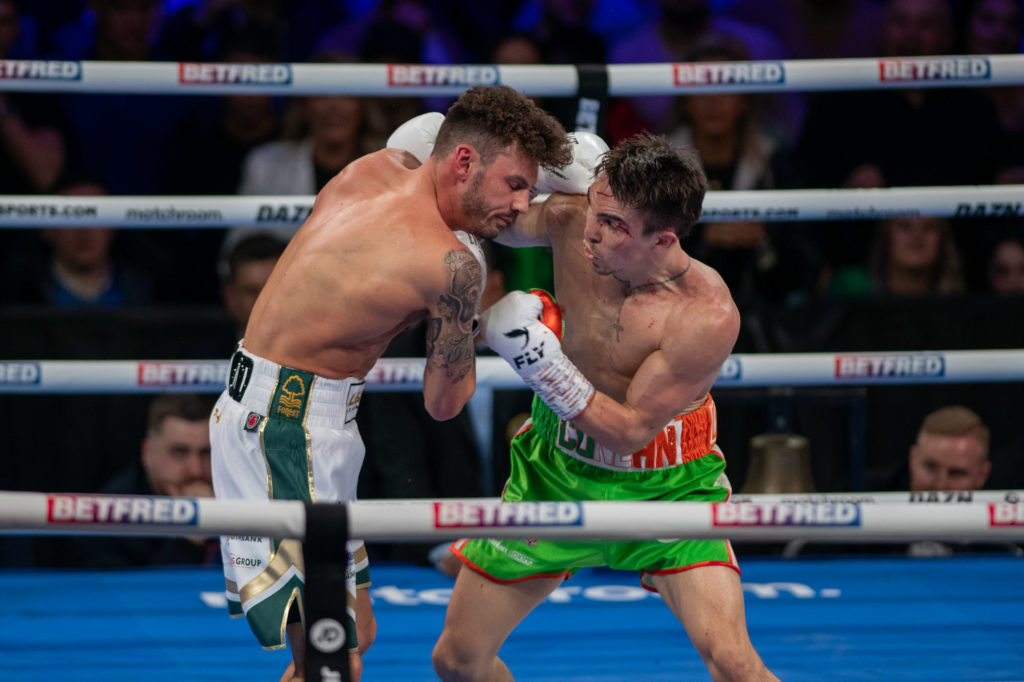 Wood and Conlan trade blows in the centre of the ring (PICS: Chris Egan)

In the 11th Conlan hits the canvas floor, albeit briefly, insisting it was a slip and not a punch that caused the fall.

On the sound of the bell and deafening cheers from the audience, both fighters went for broke, at times going toe to toe, trading blows and absorbing some immense punishment.

A minute and half into the last round, Wood forced Conlan back up against the ropes before landing a shot that saw Conlan take a small half step back, slump and then slide backwards through the ropes, his body bent forwards, his head near his knees and arms flopped down at his sides.

Landing outside of the ring just feet away from his brother Jamie and boxing promoter Eddie Hearne, the referee frantically waved his arms aloft to call the fight to a close, the gasps of the audience fell to silent as the NHS medics run to Conlan's aid. 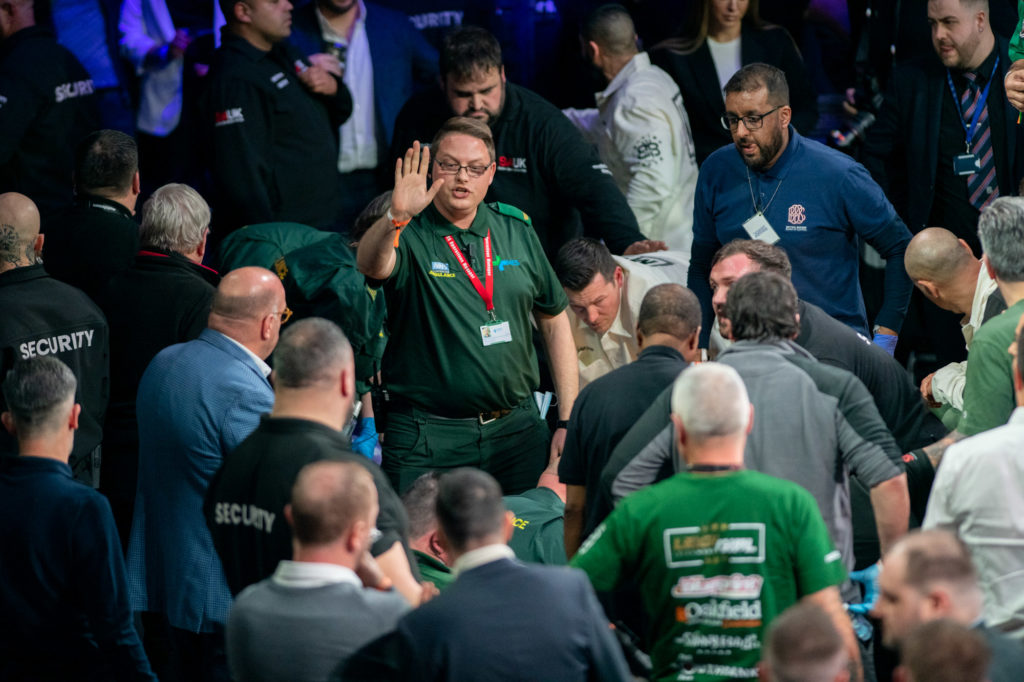 The confusion and silence that followed fed the concern that all was not well and that Conlan had been seriously injured.

Breaking the silence, it is left to ring announcer David Diamante to ask the crowd around Conlan to move back, step aside and make a route so that he could be taken out of the arena where he would then be taken to hospital.

On receiving his WBA belt, Wood refuses to celebrate, instead gesturing with his arms to the audience to remain calm and expressing his concern for his opponent, wishing him well and speedy recovery.

Within an hour of the fight, boxing promotor Eddie Hearn gave an update via his Twitter feed stating that Conlan was "conscious and stable, sitting up and talking and await CT Scans".

The note from Hearn was followed in the early hours of the morning, with a message from Conlan which read, "I'm all good folks, cheers for the messages. I'll be back, good shot and congrats to Leigh and his team”.

Cleary not deterred from the fact that he was left unconscious albeit for a short period, Conlan's focus is on the target, the next goal, the next fight and that World Championship belt. 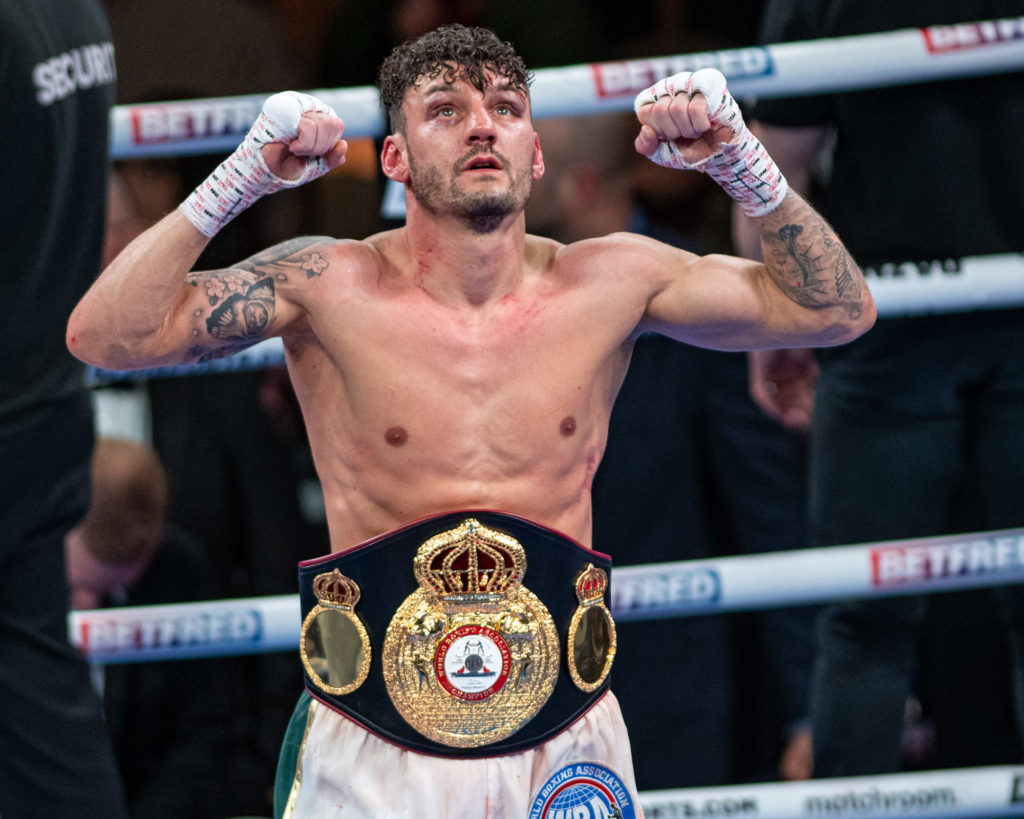 With commentators, boxing pundits and fans arguing that this was the best that they had witnessed, Wood has the opportunity to reflect on his achievement while the ever-confident Conlan has already expressed the goal of a rematch - as he first stated after the fight "I'll be back" and "definitely want a rematch lol”.