The pair escaped unhurt from the crash which occurred in Cumbernauld, as they made their way to training.

Pictures show the blue Range Rover they had been travelling in and a grey Volvo in bushes after both careered off the road.

The 54 year-old driver of the Volvo was taken to hospital as a precaution but has since been released. 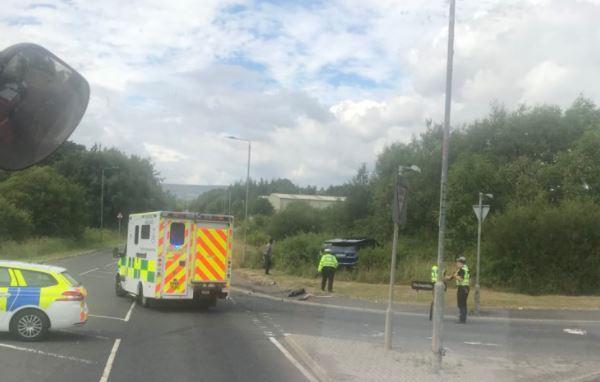 It is believed Moussa Dembélé was driving behind the pair in a separate car but he was not involved in the incident.

Rodgers said: “There was obviously a minor accident (on Wednesday) but thankfully the players and the other guy involved as well are safe and fine.

“There’s not a great deal else we can say on it because obviously there is an investigation on it, but thankfully the guys in both cars are fine.”

Both players trained yesterday ahead of Celtic’s second leg Champions League qualifier at home to Alashkert on July 18.

A spokesperson for Police Scotland told The Irish Post: “The 54 year-old driver of the Volvo was taken to Forth Valley Royal Hospital as a precaution. Nobody else was injured during the incident.

“A 22 year-old man will be the subject of a report to the Procurator Fiscal for a road traffic offence in connection with the incident.”