Exclusive interview: Jonathan Smyth, an Irish Liverpool supporter detailed what it was like before the Champions League final in Paris

THE CHAMPIONS LEAGUE final on May 28 between Liverpool and Real Madrid was meant to celebrate football in its purest essence.

The event between two European superpowers from, Spain and England aimed to bring fans together in the most anticipated club game of the year, but it could not have been further from that.

Hordes of fans from Real Madrid and Liverpool travelled to Paris for the showcase event in Saint-Denis, a suburb in Paris.

The event was set to take place in the city of Saint Petersburg in Russia, but Russia's invasion of Ukraine moved the game to the Stade de France, which has hosted major sporting events in the past.

Speaking as a pundit before the game, former French striker Thierry Henry said: Trust me, you do not want to be in Saint-Denis."

The area is well known as one of France's poorest areas, where crime and poverty rates are some of the highest in the country.

UEFA allocated 20,000 tickets each to Madrid and Liverpool and gave the rest to their corporate partners.

A lack of tickets did not stop fans from Liverpool from travelling to France to cheer on their team in their third final in five years.

The party atmosphere in the French sunshine was brought by the tens of thousands of Liverpool fans that came for the party.

Many people at home who could not get a ticket watched from around the world and awaited the 7.45 kick-off, which never came, and with that, the turmoil followed.

Crowd trouble, fans ducking under barriers to get in, kids being teargassed, abusive and poor policing were all some of the problems that happened on a shameful day.

There have been multiple accounts from people who attended the game and had their own stories.

Giving his version of the events, The Irish Post spoke to Jonathan Smyth, a lifelong Liverpool supporter and member of the group known as 'You'll Never Walk Alone Irish Reds" Liverpool Supporters Club', about the day.

Smyth, a Crumlin native, has attended finals in Kyiv and Madrid but gave a detailed rundown of what he described as one of the most "shocking events of his life."

"First and foremost, we went to collect our tickets that evening, 'We went to the fan park and enjoyed the atmosphere. It was great. There was no trouble whatsoever," he said

"We left at about 6pm their time, so it took about 40 minutes to get an Uber to get up the ground."

"We arrived near the ground. Everything was grand, but that's when it began to start."

Fans were led down an underpass between police vans in what looked like a bottleneck down under the underpass.

Relieved to be out of that. Police checks just beyond narrow underpasses made tighter by presence of vans unnecessarily. Crowd very patient but was becoming tense. I was there two hours and twenty minutes before kick off, like a huge number of people. Only getting in now. pic.twitter.com/ApMy9Slf8q

The hordes of Liverpool fans heading toward the entrance were se=subjected to a smaller and smaller space as they got closer to the ground. Smyth described it as being led like 'cattle.'

'We got through block B, but all the issues that happened were at block X, Y, and Z', he added.

'We had to walk past that and go to the other side of the ground, which took about seven minutes. And when we did get there, all the gates were closed.'

'They were not letting people in, and behind us, we could see a gap forming and people getting agitated.'

'We arrived and showed our tickets, said billets and the police stood there and laughed at us.'

After the game, rumours of fake tickets being sold by Liverpool fans circulated on social media. French sports minister Amélie Oudéa-Castéra said that Liverpool fans without a ticket were why the event erupted into chaos.

Smyth said while travelling down the underpass that at no time did anyone offer a fake ticket to him or his mates.

The problems outside the ground started to worsen as time went on as the crowd began to gather and form a larger population.

'We are up to the front, and there's a couple right beside us with two small kids, who I say are no more than 8 or 10.'

I am crushed against the gate, and I cannot move the crowds coming. Simon, who is 6'2, gets knocked to the ground, getting stamped on and kicked on.

'Next thing the riot police came and started swinging, hitting everything and anything.

The group managed to get into the ground and found their seats but were shaken by the events.

'We get to our seats, and Simon, a grown man, starts crying. He rings his wife, who is seven months pregnant with twins and tells her what is after happening.'

The match ended 1-0, and Madrid won their fourth European Cup. According to Smyth, the group had little interest in the game after overcoming what they had just had a couple of hours previously. 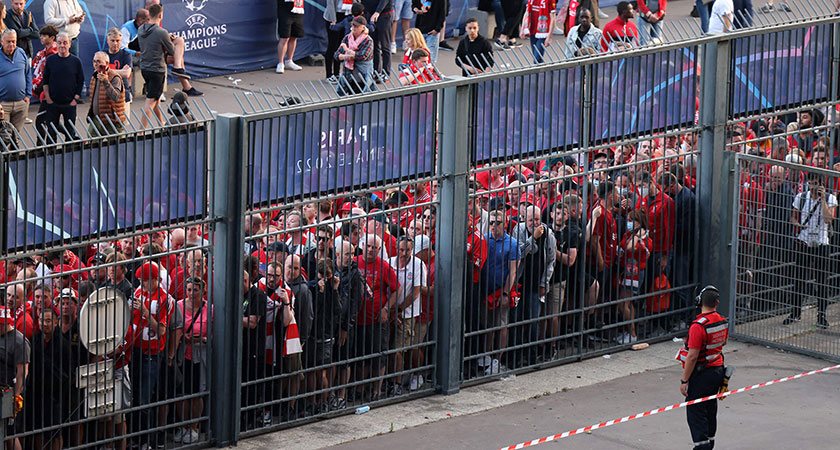 Liverpool fans outside the ground unable to get inside in time for kick-off (Image: Thomas COEX/AFP via Getty Images)

'The match itself, we had no interest in it whatsoever. It would have been different if Liverpool won, but we could not get into it.'

'All we kept thinking about what could have happened.'

Memories of The Hillsborough disaster started to surface in Smyth's head, but thankfully similar events didn't transpire on that day.

Other famous Liverpool fans like former Ireland football like Jason McAteer said that his wife had been mugged on social media, a constant theme on social media throughout the Saturday.

The area, as mentioned previously, has its fair share of problems and the group found out first-hand what that was like when they headed back from the ground.

'I put up a Google Maps on how to get back, and there are thousands of Liverpool fans walking, he explained.

'We come down to the end of the road. There is a ramp at the end on the right-hand side. I said to Anto, 'there is trouble up ahead.'

'We got so far and noticed that there were Parisian ultras. They were all dressed in black, black hoodies and balaclavas, and there are a few with motorbike helmets.'

'Then suddenly, you hear a bottle smash, and there is a fella beside me with blood all over him, and he's getting looked after.'

'The next thing I see is two fellas running down the ramp. One of the fellas with a helmet goes straight headfirst into a Liverpool supporter with the helmet on.'

'That is where Google maps was telling to go, but they knew where all the Liverpool supporters were going to be.'

Smyth was unaware of how the man who received the blow from the helmet was and was worried that that could have been another incident like the one Sean Cox went through.

Sean Cox was assaulted with a belt buckle by a Roma fan in 2018 when Liverpool played Roma back in 2018. Cox was left in a coma but has since come out of the coma. He continues to receive treatment to this day. 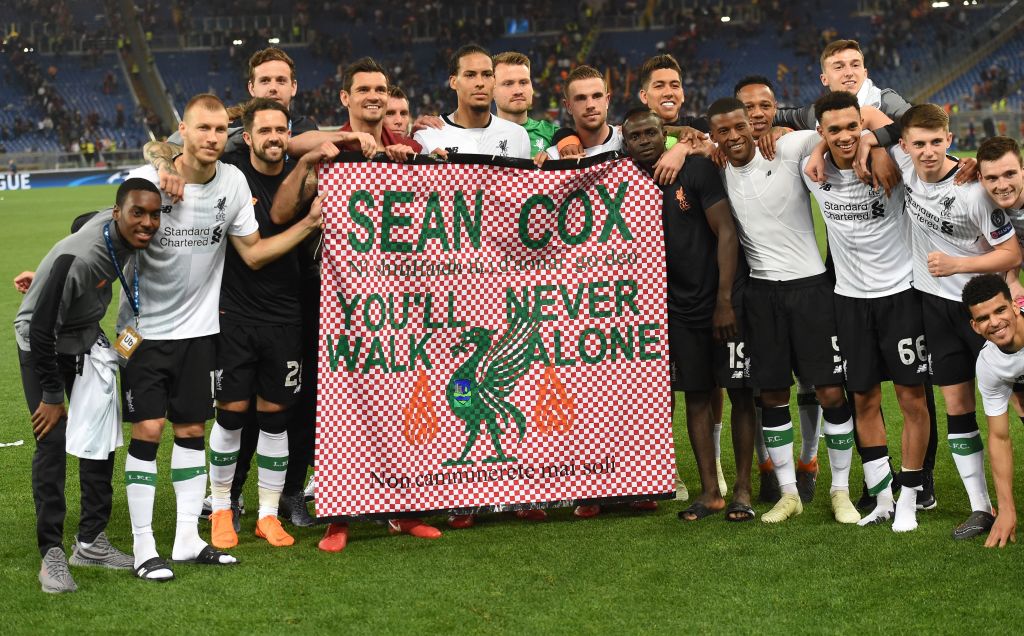 Since then, UEFA has apologised to Real Madrid and Liverpool fans for the poor organisation and the distressing events that marred the build-up to the Champions League final.

The statement read: 'UEFA wishes to sincerely apologise to all spectators who had to experience or witness frightening and distressing events in the build-up to the UEFA Champions League final at the Stade de France on May 28, 2022, in Paris, on a night which should have been a celebration of European club football."

Smyth is adamant that he will never attend an away match in Europe if Liverpool plays again after becoming embroiled in the madness.

'God's truth, I will never go to an away game again. I will go to Anfield, but I do not know whether it was England or everyone being painted with the same brush.'

'I went to France with Ireland in the Euro's, and there was no trouble at all, and it was one the best time's I have ever had, but for some reason, whatever got into their head, they saw red and put people in danger.'

'I do not know how somebody didn't die or end up in hospital. Could you imagine if that came to Ireland, it would not happen'

'No football fan should be put in that situation, and it must not happen again.'

'Never in my lifetime did I think something like that would happen. I got into that Uber and what happened after is something I will never forget for as long as I live.'