BRIAN Kerr has led tributes to former Republic of Ireland football manager Liam Tuohy, who passed away on Saturday at the age of 83.

Tuohy, nicknamed 'Rasher' passed away in his native Dublin after a long battle with illness, surrounded by his loved ones.

The FAI have announced that he will be honoured at their upcoming friendly against Oman on August 31.

He held down a second job as a sales rep with HB Ice Cream while also managing the Republic of Ireland team between 1971 and 1973, and somehow he also found the time to manage Shamrock Rovers.

Speaking about it in later years, Tuohy explained something eventually had to give.

In author Sean Ryan's book The Boys In Green, Tuohy is quoted saying: "I had too much on my plate. I would have loved to stay on but it was not practical to keep a job that was paying me £6 a week, and give up Rovers,"

While managing Ireland, Tuohy picked up a wage of just six pounds a week, a long way from the wages earned by managers today.

Tuohy started out in the game as a professional with Shamrock Rovers, joining them in 1951, before moving to Newcastle United in 1960 only to return to Shamrock Rovers in 1963.

He lined out eight times for his country and made history when he scored Ireland's first ever European Championship goal.

The Dubliner hit the back of the net against Czechoslovakia at Dalymount Park in 1959.

When he retired, Tuohy went into management where he was boss of Rovers, Dundalk, Dublin City University and Shelbourne.

As boss of Rovers, Liam Tuohy oversaw a period of domestic dominance and also brought the Hoops into Europe.

In 1966, they narrowly lost to Bayern Munich after holding the German side to a 1-1 draw at Dalymount Park. 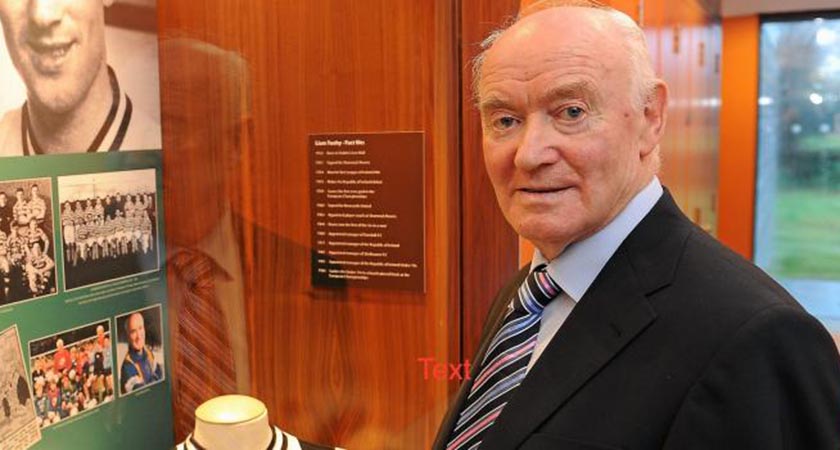 Liam Tuohy pictured beside a dedicated alcove to him at FAI HQ passed away last Saturday (Source FAI.IE)

It was as boss of the Ireland youth team that Tuohy's long lasting legacy is found.

He became the first Irishman to manage an Irish team at a World Cup when he took the Ireland Youths there in 1985.

In his later years, Tuohy became Director of Football with Home Farm, with responsibility for overseeing the development of young players.

Speaking to Today FM, Brian Kerr said: "Liam was a mentor to me and hundreds of other young coaches, we were privileged to spend some time with him,

"I learned a huge amount from him and I certainly would have got nowhere in the game without that time I had with Liam, the guidance I got from him and the things I learned from him."

FAI boss John Delaney has also added to the tributes by paying tribute to his humour.

“Liam Tuohy was a wonderful football man with a quick wit and tremendous knowledge of the game. His loss is such sad news for Irish football,” said Delaney.

“We will be honouring Liam’s memory at the forthcoming international against Oman. I am pleased that we had an alcove dedicated to him at the FAI headquarters.

"My thoughts are with his family at this sad time.”

“It is with great sadness that I have learnt of the death of Liam Tuohy.

"Supporters of football across Ireland will feel a great sense a loss at his passing. As a player for Shamrock Rovers and Newcastle United and as a manager for the Hoops and the Republic of Ireland, he left a lasting imprint on the world of football.

"Sabina and I would like to extend our sympathy to his family, friends and colleagues.”

Brian Kerr want's Troy Parrott to fufill his potential before it's too late.

Munster's team to face Edinburgh on Friday is out