Frampton and Quigg fight could be in London

BARRY McGuigan has said that London would be the “sensible” option for IBF super-bantamweight titleholder Carl Frampton’s proposed bout with Bury-man Scott Quigg.

The manager of the 28-year-old Northern Irish boxer confirmed the capital as a venue option to host the fight, but insisted a decision was likely to be made in the next month.

Speaking to The Irish Post on Monday, McGuigan said: “London for us would be a very sensible choice.  If we can do business with the other side, we’d like to take Carl there.

“It makes sense, London’s the capital of the world. That’s where everybody wants to be, it’s the greatest city, there’s no doubt about it. If we’re going to debut over here as a World Champion London is the place to do it.”

McGuigan outlined his position amidst comments by Frampton that he would be willing to fight Quigg away from London – where he is trained by McGuigan’s son Shane — in his opponent’s native, Manchester, in order to make the fight happen.

The focus shifted to the potential domestic encounter with WBA World Champion, Quigg, following Frampton’s first defence of his world title, a fifth-round stoppage of mandatory challenger Chris Avalos in front of a 9,000 strong crowd at the Odyssey Arena in his hometown, Belfast, on Saturday night. 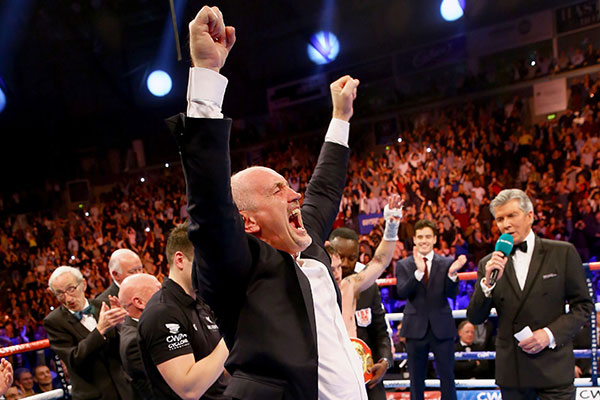 Quigg, who is promoted by Eddie Hearn’s Matchroom, travelled across the Irish Sea to watch Frampton dominate the Californian ringside, and whilst both boxers — who contest in the same weight division — are keen for the fight to go ahead, their rival promoters have suggested airing the bout on alternative television channels.

McGuigan — who won the world featherweight title at Loftus Road thirty years ago — praised ITV’s coverage believing it will help to build Frampton’s profile further.  “I think the time is right, he got two million people watching him on ITV at 11.15 at night,” he said.

“So, given a slightly earlier time slot and the fact they’ve seen him now for the first time, they’ve got the background story and my association with him, I’ve got no doubt it would be a great deal better than that next time. ITV must be very thrilled with that.

“Carl is getting recognised more and more, even before he made his ITV debut. So I would imagine it would be more intense when he comes back here. He can’t walk anywhere in Belfast or Dublin because he’s so recognisable, there’s a great deal of affection out there for him.

“In London, loads of the cabbies, who are into boxing are beeping at him when he’s walking down Battersea Bridge, but I would imagine that will increase tenfold after Saturday’s night’s success.”