GAA: Why do so many All-Ireland club hurling finals fail to deliver?

Na Piarsaigh were in complete control. The game was already getting away from Cushendall, who looked to have no way of arresting that slide. By half-time, the match was over. Again.

Despite all the epic games in the history of the All-Ireland club hurling championships, the one downward trend that the competition hasn’t been able to rectify over the last 15 years is the poor quality of All-Ireland finals.

Eleven of the last 15 finals have effectively been over at half-time. Not a single one of those games could be considered a real quality match. The last decent decider was between Athenry and Graigue-Ballycallan in 2001, and even then, Athenry ran away with the match in extra-time, winning by eight points.

The average losing margin in the meantime has been nine points. Some of those defeats have been really ugly.

Portumna annihilated De La Salle in the 2009 decider by 19 points. The smallest margin of victory was St Thomas’ two-point win against Kilcormac-Killoughey in 2013 but it was another poor game, albeit one played in dire conditions.

Why does it keep happening? Perhaps pressure has been a key factor because of such high stakes. Some teams have been vastly superior but many of the teams have just failed to perform.

Clarinbridge went into the 2002 final with a team of young, fast and slick forwards and were expected to run Birr ragged in the vast expanses of Thurles. Birr restricted Clarinbridge to 1-5 and won pulling up.

Then they just weren’t able for the pace and width of the new Croke Park field in 2003 and 2004 and were well beaten by Birr and Newtownshandrum.

The deficit in pace between sides has also been a decisive factor and the new Croke Park pitch really suited the Portumna attack, who were able to rip a one-paced Birr and De La Salle defence apart in the 2008 and 2009 finals.

The winners always seemed to run away with the game early but the bottom line of grinding out a result occasionally contributed to the trend of poor finals.

In the eagerly anticipated 2006 decider between Portumna and Newtownshandrum, they looked set to play out a classic shoot-out. Portumna had been averaging 2-18 all season but they came armed with a game-plan and once they got ahead, they dug in for a battle to stop Newtown’s running game.

They only scored 2-8, 2-2 of which was from play, and still won by five points. It could even be argued that Portumna’s performance that day set the precedent for modern hurling as Kilkenny adopted the same template in that year’s All-Ireland senior final against Cork.

What has made the trend of poor All-Ireland club finals even more difficult to reconcile is the number of classics and epic battles played out in semi-finals over the past 15 seasons; the drawn Newtownshandrum versus O’Loughlin Gaels match in 2004; the epic between Ballyhale and Toomevara in 2007; Ballyhale and Newtownshandrum in 2010; Clarinbridge and De La Salle in 2011 was one of the greatest club games ever.

Maybe it’s just a quirk, but semi-final pairings have often had a final feel about them. Four semi-finals in the last six seasons have gone to extra-time. Each one of those winners has gone on to win the All-Ireland.

The Na Piarsaigh/Oulart-the-Ballagh semi-final in February was on a different level to what Cushendall and Sarsfields produced in Navan a couple of hours earlier. 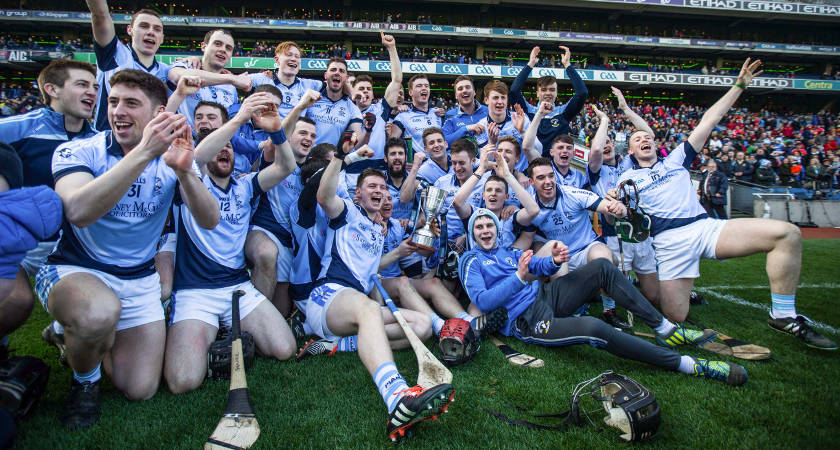 Na Piarsaigh players celebrate with the cup after beating Cushendall 2-25 to 2-14 [Mandatory Credit ©INPHO/Cathal Noonan]
Still, there have been All-Ireland final pairings during the last 15 years which seemed like the last word, champion against champion, champion against champion-elect; Athenry and James Stephens in 2005, Portumna and Newtown in 2006, Portumna and Birr in 2008, Portumna and Ballyhale in 2010. And on each occasion, the game was still a disappointment.

If you were to excavate deeper, you could have gathered enough evidence afterwards to point towards the reasons.

Newtownshandrum’s post-Christmas form was poor in 2006 and Portumna were primed to make up for the disappointment of losing to Dunloy in the 2004 semi-final. In 2005 and 2008, the Athenry and Birr teams which lost All-Ireland finals were spun out and past their best after all their epic achievements of the previous decade.

Similarly, Portumna’s efforts of trying to win a historic three-in-a-row caught up with them in 2010.

Although there were only four points between Ballyhale and Portumna that day, that final was the most disappointing of all. Beforehand, the stage looked set for a game that had the potential to be one of the great All-Ireland club finals.

Additionally, no other final in that timespan had been loaded with the same weight of expectation or anticipation.

Yet a game with the potential to stand apart produced a disappointing match. Ballyhale were always in control.

Just like Na Piarsaigh were last week. Beforehand, everybody at least hoped for a good game. But recent history had issued enough of a warning to expect the opposite.