Just seven months after being named as the club's Director of Rugby, it has been announced that he is to leave the club.

Following talks between the Midlands-based premiership club and Murphy about his current contract, it was decided that his contract would not be renewed and, by mutual consent, it was agreed that Murphy would leave the club with immediate effect.

Murphy joined Tigers as a teenager, making his senior debut in 1997, and went on to make 322 appearances in 16 seasons, including four years as club captain.

After retiring in 2013, having won eight Premiership and two European titles, Murphy moved into coaching and rose through the ranks as skills coach, backs coach, attack coach, head coach and director of rugby.

He is Leicester’s leading try-scorer and appearance holder in European rugby and is 17th on the club’s all-time try scorers’ chart. 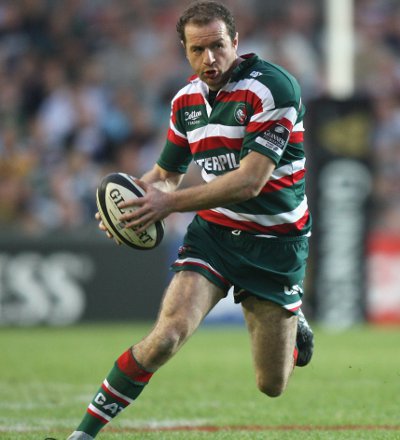 Geordan Murphy retired from playing for Leicester Tigers in 2013

Speaking about his time at the club, the outgoing Director of Rugby said: “First, I want to thank my wife Aneka and my two boys, and our new addition on the way, for everything they have done for me and how they have continued to make me a better player, coach and person.

“As well as my family here in Leicester, and all of our friends, I want to thank my family and friends in Ireland for their support throughout my career at Tigers as a player and coach in the good and bad times.”

He added: “I have spent 23 great years at Leicester Tigers and forged great friendships with people throughout that entire period.

“I’m most proud of the respect I earned from my teammates and colleagues, and I’m grateful to all of them for how they have helped me, supported me and shared in my time at this club.

“Winning has been the easy part. It is when things are not going well, when you are losing and having to get back up every day and put on a brave face, that you know who your friends are and, to all of those who supported me through those times, those are the friends I will have for life.

“I wish the club the very best for the future on and off the pitch, and say thank you to the supporters who have been a part of my life for more than 20 years.”

Tigers Chairman Peter Tom thanked Murphy for his contribution to the club, both on and off the pitch, since 1997.

“I want to express, on behalf of everybody at Leicester Tigers, my sincere gratitude to Geordan for all that he has done for our club for more than two decades,” said Tom.

“His contribution of more than 23 years is unrivalled in the professional era and all of us had the privilege of watching Geordan play for Leicester Tigers before being afforded another privilege in working alongside such a passionate club man.”

He added: “I wish Geordan, his wife Aneka and their children all the best for what comes next and I know, when we are able to safely do so, we will afford him the proper send-off he deserves in front of all of our supporters at Welford Road.”

The club will not be recruiting to replace the Director of Rugby role but will now commence a recruitment process to identify candidates for a position in the organisation charged with overseeing the strategic vision and off-field responsibilities at Oval Park.

Tom added: “This decision, while difficult, was made to ensure we are as effective and successful an organisation as we can be at Leicester Tigers.

“Steve Borthwick understands the expectations of him, his coaching team and the playing group at Leicester Tigers on the pitch.

“We are determined to see this club back at the top, where supporters expect us to be, competing for trophies and are fully behind the players, coaches and staff on this journey.”