CATHAL KEOGH was the main man for Fulham Irish, scoring two goals and four points in a comprehensive win in the London Intermediate Hurling Championship.

Fulham were dominant right from the first whistle and other than an early Granuaile goal, they were able to push far in front and secure a comfortable 11-point lead at the break.

The tide of the game was nearly flipped on its head at one stage, with the dominant south Londoners taking their foot off the pedal.

Yet despite conceding three goals in the second half, they managed to stay on top and fire a couple of their own to close out the game.

Granuaile came into the contest on the back of a heavy defeat to Sean Treacys, while Fulham Irish were full of confidence after seeing off Cú Chulainns in the last round. 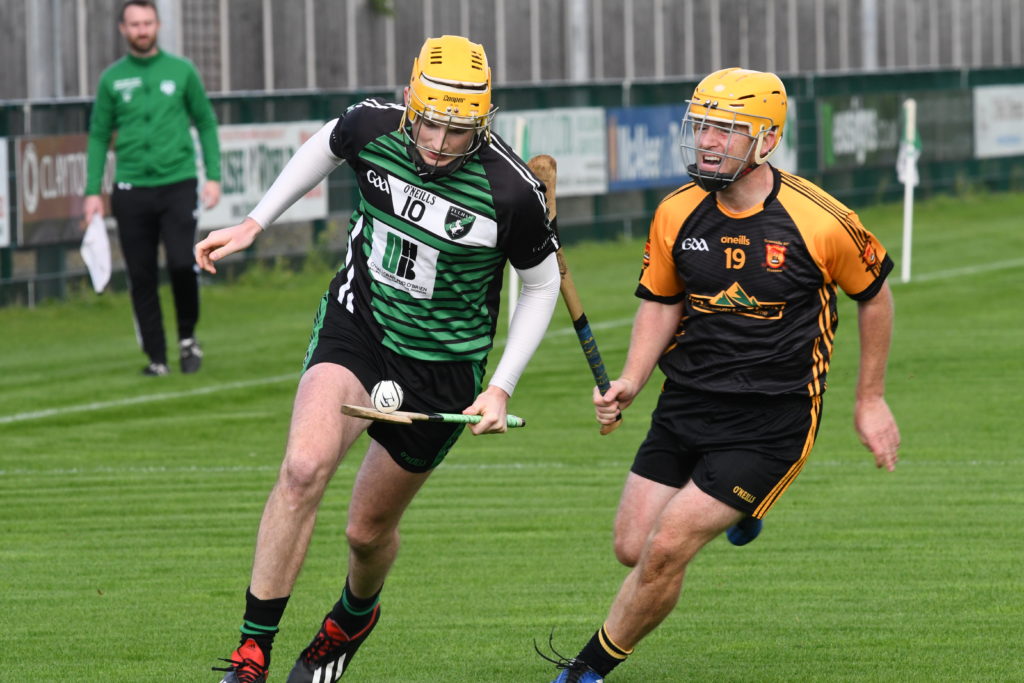 Fulham Irish on the attack against Granuaile in Ruislip on Saturday. Photos: Sheila Fernandes

They are clearly bidding to go further in this competition, after finishing runners up to Fr Murphys last year. On this showing, they have every chance.

Fulham Irish certainly hit the ground running fast, scoring their first point, within the first ten seconds, through Rory Costello, before points from Daniel Currans and Michael O’Dwyer gave them a three-point gap.

Granuaile suddenly woke up and immediately equalled the scores when Ryan McGrath scored a goal, from their first attempt.

This nevertheless was only a minor slip in concentration from Fulham, who scored a succession of points, thanks to Eoin McCarthy, Costello and Keogh, as the outcome of the game looked almost certain to be put beyond doubt early on.

However, the home side continued to dig deep and nearly had another goal, only for the effort to strike off the bar.

Farmer and Keogh on the double

But this miss would be costly, as Fulham finally found the net, twice before the break. Paul Farmer found it first with a powerful effort, before in form Keogh got himself one.

The outcome could have been different if Granuaile had found that cutting edge in the final third.

McGrath and James Maxwell were the main outlets for them, getting two points each in the first half. But other good chances went begging.

A 65’ from Currans for the away side, was the last action of the half, as Fulham went into half time with an 11-point lead.

Fulham at the restart looked like they thought the job was done, almost allowing Granuaile to get a foot hold in the game, with Cian Lenehan coming close to getting a goal.

Maxwell on the mark

After Currans and McGrath grabbed points for Fulham and Granuaile respectively, Maxwell, who was Granuaile’s main man in the game, managed to get them a sublime second goal, to really open up the game.

But quick as a flash, McCarthy got Fulham a maximum to restore the south London outfit's advantage, as the two sides traded blows.

Fulham had their lead plugged back to only five, when TJ Medley managed to score two goals in five minutes for Granuaile to make for a thrilling final period.

Fulham took control again, when in another action packed five-minute spell Farmer and O’Dwyer grabbed themselves a point each.

Maxwell, who had worked tirelessly hard in attack, managed to grab himself and Granuaile another point late on.

But it was a mere consolation, as Fulham had the final say when Farmer struck over for a point which secured a massive 13-point win.

The result leaves Granuaile near the foot of the table, while Fulham look like they will take some stopping this year.