Here's the Ireland team that should play against Luxembourg on Saturday

IRELAND TAKE on Luxembourg on Saturday night, and to put it bluntly, we need to win.

It will be Stephen Kenny's 10th game in charge, and though there are clear signs of progress, the results need to come eventually.

So if we're being honest, Ireland need to put out a team to win the game.

Aaron Connolly will miss the game through injury, so Ireland will have to plan without the pacey striker.

Even with Connolly in the side, our team is not blessed with glorious finishing ability, so we're going to have to aim to create chances from other areas. 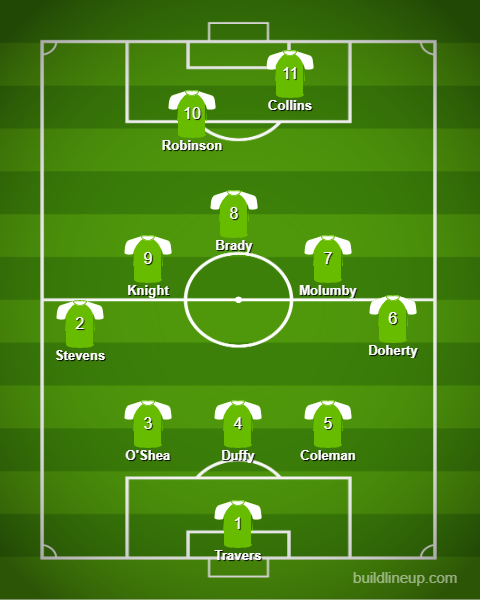 Off the bat, we feel there are some controversial inclusions here.

Mark Travers did not play well against Serbia, but at 21 years of age, it would be worse for him to be dropped from the team entirely. He needs to be given the opportunity to bounce back, and this is the ideal game for it to happen in.

In front of him, the only change we are making is putting Shane Duffy in for Ciaran Clark. Duffy's height was missed against Serbia, especially when Mitrovic came on. Plus, we could do with the added goal threat from set pieces.

From then, we're dropping out Josh Cullen (even though he did play well against Serbia), and Alan Browne for Robbie Brady and Jason Knight.

Brady's set piece delivery is better than anyone else we have to offer, and he could make things happen in the number 10 position. Knight for Cullen is a change being made purely as there is a quick turnaround between games, and Knight will be well able to get around the pitch.

We've stuck James Collins up top replacing Connolly, as his physical presence may be able to win us a few second balls for the dynamic midfield trio to run on to.

A lot of our creativity will come from the full backs, who should be told to bomb forward at every opportunity, with the midfield well able to cover for them.

It leaves Alan Browne and Cullen to come on if we need to freshen things up a bit, as well as Shane Long who always gives his all.

Ireland vs Luxembourg kicks off at 7.45pm on Saturday night.